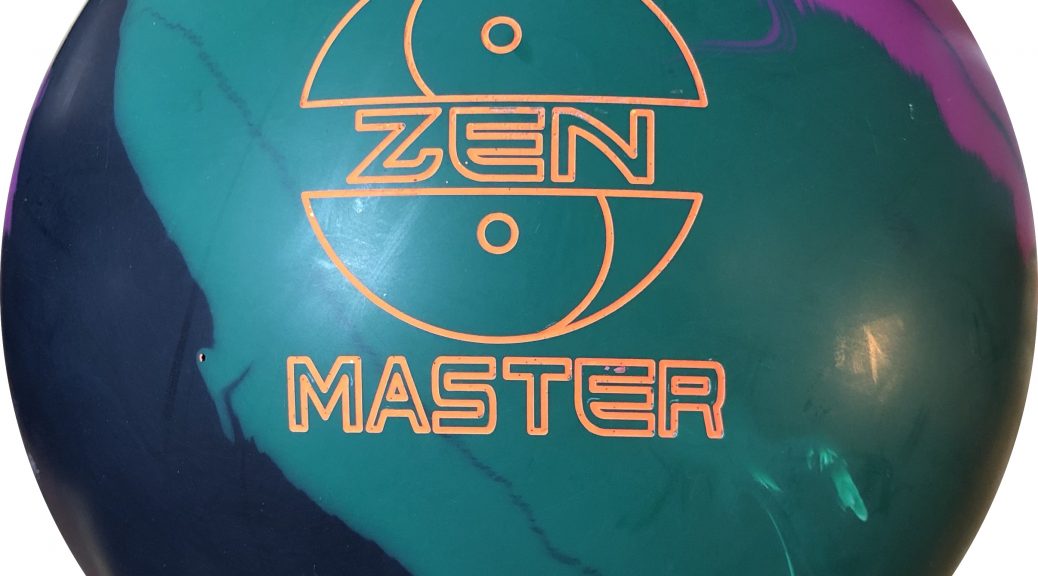 First Impressions
The Zen Master is strong and versatile. It has the potential to be in the realm of worldbeaters like the Phaze II.

Overall
I’ll begin by saying there was no chance to play the Zen Master direct for me. Honestly, it reminded me of what we saw with the huge Motiv Forge Flare. Lining up for a potential comparison… Anyway, it simply read too soon and I couldn’t keep it left of the headpin. I worked around the 2nd arrow and kept moving. No chance to find the pocket until about 14 to 5. That’s a huge move with my feet already. However, this is when things begin and they get better from there. Near the 3rd arrow left the potential for flat 7s. Still too strong. Now get into somewhere between 3rd and 4th arrow and we are in sweet spot territory. This thing wants to shape itself. The cover is strong enough while the core is a nice big heavy rolling core. I don’t want to call it lumbering but it almost feels like that. It just chugs itself and transitions predictably but in between smooth and responsive. It’s got what I now call the hallmark 900 Global ball reaction. I’ll bring this back in the comparison but basically like the relative smoothness of the Reality is to the sharper Proton Physix, so is the Zen Master to the Phaze II. The Zen Master shapes even from very deep angles for me. You can see me get past the 4th arrow. I felt like this thing will get to the pocket under any circumstance that I want some shape on the lane. I tried to throw it harder from direct and it can be done but more suited if your game is already a direct speed dominant or very forward rolling style.

In terms of arsenal fit, this is pure Strong Control. That’s a really easy call. It’s definitely has that control shape like the Phaze II.

I was able to do a direct comparison with a relatively new Phaze II with a matching surface finish. Ultimately, you can see that the Phaze II and Zen Master are in the same worlds. They are about the same strengths with a slight variation in shape. If you’re checking this out, you already know the Phaze II is one of the best and most longstanding benchmark balls. Benchmark can be taken in several contexts. I put the Phaze II in the Strong Control category. For some, that slot is the benchmark ball. For others, it’s a benchmark in the sense that it is a must in the arsenal. The Zen Master fits in the same Strong Control category. It is possible it turns itself into the must for an arsenal but earl days to sell it that hard. What I can tell you is it’s basically a slightly earlier, slightly smoother Phaze II. Just like we compared the Reality and Proton Physix. The Proton has a sharper transition while the Reality is a bit rounder. Still cover the same conditions but just a little bit different look. That’s the same deal with the Phaze II and Zen Master.

Stroker Review
It’s Bryan’s turn to test the 900 Global Zen Master. First impression for him was all about control and even ball reaction. The cover is very strong which makes this ball arc for days. It’s really right in the Strong control category. The question is would it be Bryan’s strong control. He currently still uses the Motiv Forge for that slot. Let’s jump into ball reaction specifics. The really even arc meant a few things. He had to move a bit left to open as he can’t be right in the friction. But if he threw it up the boards in the downlane oil, it really did just about nothing. But not because it’s weak but rather too strong. Cover read but it burned up and it was so arcy that it didn’t punch through the pins. Gave pocket control but 10 pin city. So the best look was really to be left but push it to the friction relatively early. The friction plus early read was when it turned over and drove through the pins well. So he had to be more left than usual and wing it into the friction to get the response. Misses in just didn’t hit as mentioned. He really never got a weak response from friction so it didn’t die. Part of that is that the early roll and friction meant that that’s where it uses its energy anyway. If anything, he got overhook. At the end of the day, on the house shot, it’s not the ideal balance for Bryan’s style. It looks like it may be a little condition specific for him where he needs the strong cover but the pattern is medium length so there’s still time for that arc to hit effectively.