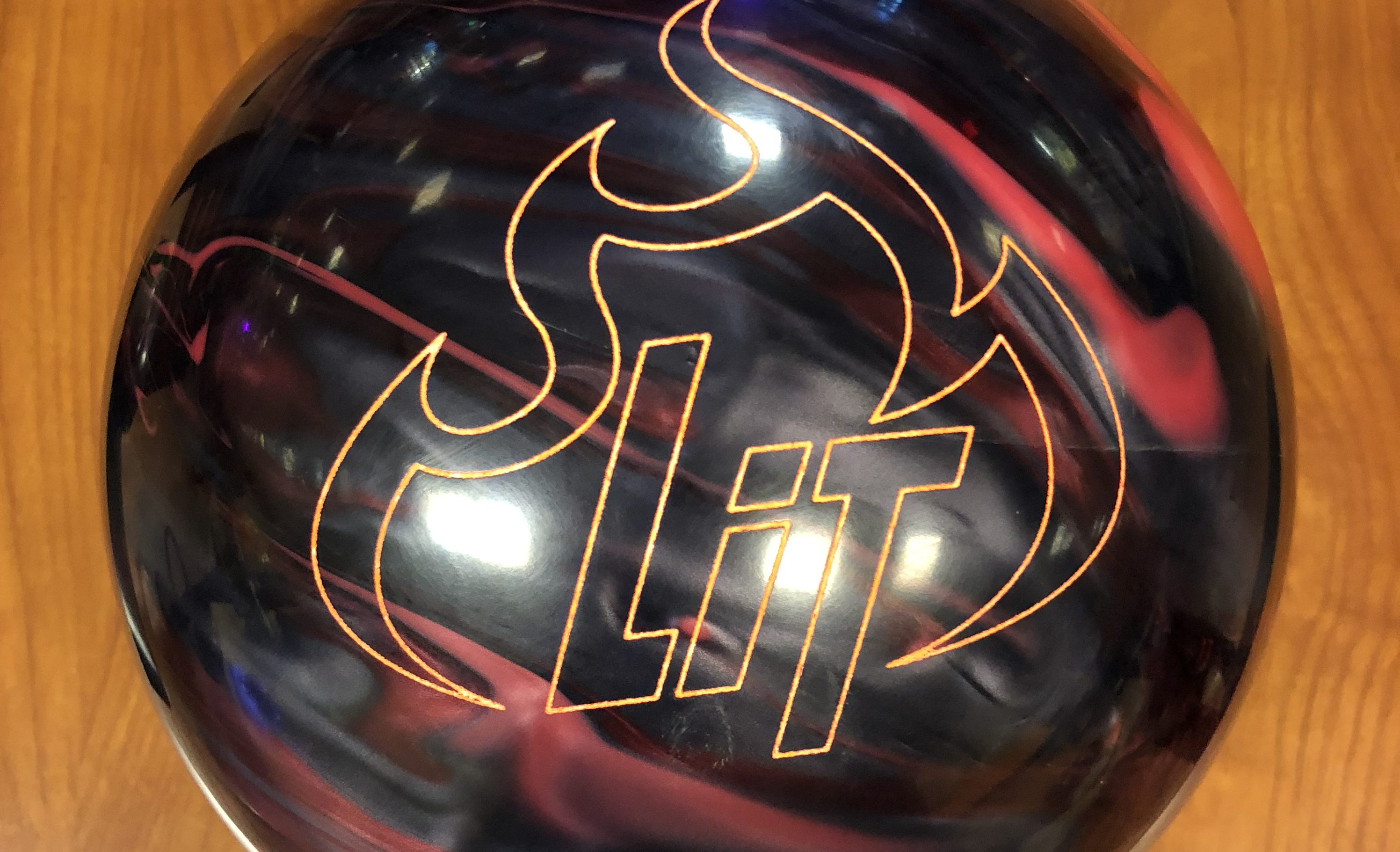 The Lit Pearl Lights the Lanes Up… First Impressions
The Magenta and Black swirls are so pretty. I like the Lit Pearl’s smooth but punchy ball reaction shape. Literally from the first ball thrown I had a smile on my face.

Value
B+
The Columbia 300 Lit Pearl is a pretty versatile smooth but punchy ball. When you combine that with its performance line price, you get a good value.

Overall
THS: B+
Sport: B
Columbia 300 releases it’s pearl compliment to the Lit. This is a medium-strong pearl with a strong asymmetric core. The short version is it works. We have been testing many strong pearl asyms recently and the Lit Pearl just seems to have a nicely balanced core to cover combination. This is a big core for sure but it’s rounded shape ensures its got a nice smooth shape. The cover doesn’t feel so strong as to not allow this core to store a good amount of energy. It also doesn’t feel weak that you couldn’t throw it on medium/heavier conditions. So…clean…smooth…punchy.

I’m testing the Lit Pearl first on the house shot and honestly, I felt like it was a really good match up to my game. I didn’t have to manipulate my natural release but I could to achieve varying results. While I was trying to get lined up, I started in my usual slot and wasn’t sure so moved left. The ball didn’t seem to want to start up. I quickly realized I have to get in, not out. Meaning I just needed to find more oil, not less. I saw a very readable, predictable, and smooth motion that I love to see. It’s not the strongest asym pearl out there, but that’s not Columbia 300’s MO. This is in the vein of control but boomy. I kept chasing in and there was a pretty clear cliff where it’s just not going to make it back. It was noticeable and it speaks to the smoothness, not weakness of this ball. This is a an asym with a very high mass bias.

Sean was next. Take a breath, more pearl asyms. This ball was, as they say, “money”, for Sean. The Lit Pearl is that ball he can just rip on without ill consequences. He can go direct while some asyms are a little tricky. He can get in which is his bread and butter. He carried from everywhere. The cover allowed the ball to get downlane so that the heavy asym core doesn’t puke. It allowed for the perfect location of the transition from skid to hook to roll. Sean just kept striking so we had to have him stop. So far, Tweener and Cranker loved the ball reaction.

Bryan was not so fortunate. He honestly struggled with the Lit Pearl on the House shot. He found himself in a bit of a box which is not what you want on a house shot. Bryan started in his normal track on this wetter house shot but found the ball to hit flat as the core is strong. As he bumped in, the cover was too clean and too smooth of a reaction for consistent carry. He would need to adjust the surface or use it on medium or lighter conditions. It was a bit of a surprise but thinking through, it makes sense. Bryan can typically use more aggressive surfaces on this fresh house pattern so not crazy to think the fresh pearl on this fresh shot was just not a match for him. But, it worked extremely well for him on sport…more on that later.

We are using a 38 ft sport pattern, similar to Alcatraz. Even though this is a shiny ball on a fairly fresh shot, I had no trouble finding the pocket consistently, assuming I threw it half way decent. It’s smooth controllability plus punchiness allowed me a really nice look that synced to my game.
For Sean, the shiny asym is more of the same. He can get on it without worrying about overhooking. He had a good look with more or less side rotation. The ball had great drive through the pins until he opened up a just a bit too much where it carried but deflected a bit. So the ball showed him the limit without punishment.
Finally Bryan and he was able to play the Lit Pearl just a touch left of his benchmark ball and had absolutely zero problem crushing the pocket with it. He really had a good look on this sport shot with the Lit Pearl.

Final Thoughts
The Columbia 300 Lit Pearl is typical Columbia and gets the job done. It’s clean and smooth down lane. It offers easy control. The cover is clean and you can see the core transition to its PSA to smoothly “pull” the ball towards the pocket. In previous tests, pearl asyms that are controllable tend to work well for high rev bowlers but less for tweeners and strokers. In this case, the ball worked beautifully for the Tweener and high rev. For the lower rev bowler, he gave up consistent carry on house from the smoothness but was was lost there was gained on the tougher sport shot in spades. All in all, we feel the Lit Pearl will be a winner for Columbia 300.