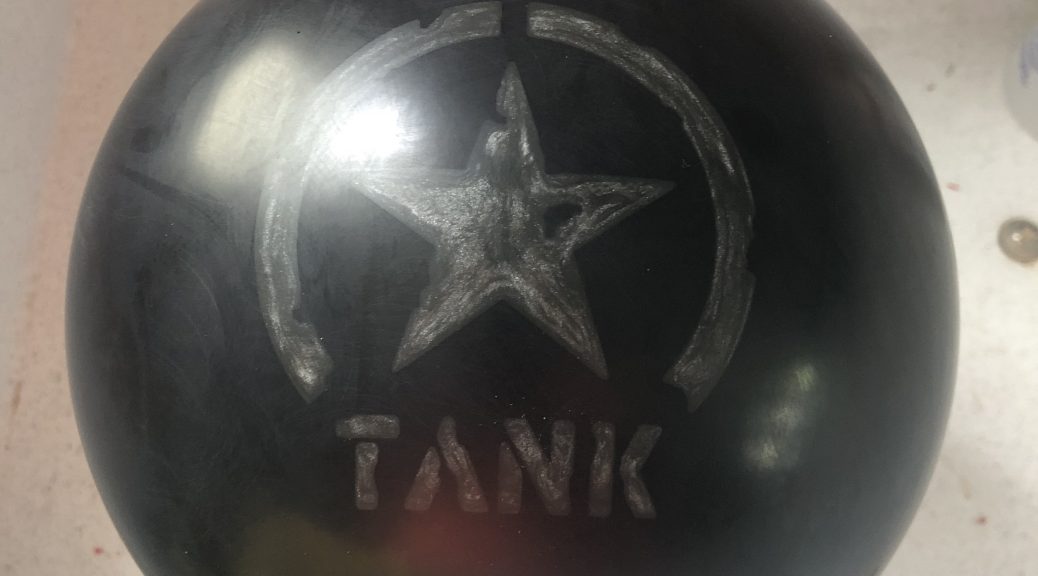 This One is Covert… First Impressions
It came off the friction hard and I thought huh… Still not reactive and not quite urethane. This just might be fun.

Thanks to Jeff Smith and Pure It Bowling for drilling our equipment.
Buy the Motiv Covert Tank at PureItBowling.com.
Thanks to Limerick Bowl in Limerick, PA.

Value
B
Depending on the bowler, they may find my score too conservative or too generous. It offers something different, the question will always be when does this type of ball reaction come into play.

Overall
THS: B
Sport: B-
Motiv looks like it set out to create an option fits into the “holy grail’ category, at least for high rev bowlers, the control of urethane and backend motion of reactive. Urethane is all about surface and digging in early. Then it just rolls or gently arcs to the pocket for 30 feet. Reactive is all about gliding through the oil, i.e., no motion in oil and then violently reacting to friction. Hammer’s Purple Pearl Urethane and Storm’s Fever Pitch tries to fit there. Now Motiv claiming the cover is neither urethane nor reactive but clearly is an attempt to find that blended reaction. I won’t make this a technical discussion but it is clear they have created something to effectively compete with the rest. I started more direct 9 to 5 and it promptly went sideways to cross over. Move to 11 to 5 and boom. Go 11 to 7 hit pretty soft for a flat 7. 13 to 8 and it take the 7 out. 9 to 7 struck nicely. Big thing is the more oil it sees downlane, the less it responds so you have to adjust your trajectory depending on the pattern. Ultimately I really liked the control for the first 30 feet of the lane while generating a bit more angularity and hit than traditional urethane. This helped with carry overall and I have to say I enjoyed tossing the Covert Tank. What I really like is the ability to play pretty direct with speed and have the ball funnel through the pins and the Covert Tank looked really good doing that as well as getting further in.

For Bryan, he was immediately taken aback with how strong this ball was. He figured out where to line up and could see the ball walk to the pocket. It’s still not reactive but it sure as day did not look like typical urethane for Bryan. He considered the hit exceptional compared to urethane and even the Fever Pitch we tested recently. As the line burned up, he was able to bump in an surprisingly the ball kept going instead of puking like urethane might do. We aren’t talking about moving whole arrows here but the Covert Tank offered significantly noticeable room when compared to traditional urethane.

Just to describe this in a more simplistic way. Imagine reactive being a check mark shape on lane while urethane would be an opposite check mark, starting early and then doing nothing. Then imagine an arcy reactive with a more banana shape. The Motiv Covert Tank would like like a flipped banana. Giving you almost urethane reaction up front and almost reactive downlane.

Sport Shot
We tested on the 35ft Kegel Boardwalk pattern. For my hand, this is the type of pattern the Covert Tank might come into play. I just have to finesse it a little and be careful I don’t get too fast. It was playable but a little trickier than I expected. I’ve used urethane to very good effect on this pattern. The more angular motion of the Covert Tank was somewhat of a detriment compared to the flat backends of urethane. In the end, I felt like I just had to throw the Covert better but it’s still a decent option.
For Bryan, it again surprised him with its strength. Whereas you can move the breakpoint in with traditional urethane on a shorter pattern, the Covert Tank just crossed over showing off its backend. Nevertheless, Bryan could surprisingly use the ball without feeling like, no way would I ever do this in real life as is the case with most urethane.

Final Thoughts
I actually think the Motiv Covert Tank is legitimately a really good ball that truly does offer something unique. I love how it controls the fronts while not being completely dead down lane. It plays like a solid urethane through the front half of the lane and just a bit under a solid reactive downlane. Higher rev testers will probably make this ball look bigger. Medium and lower rev may consider the Covert Tank as an alternative to the very niche urethane.