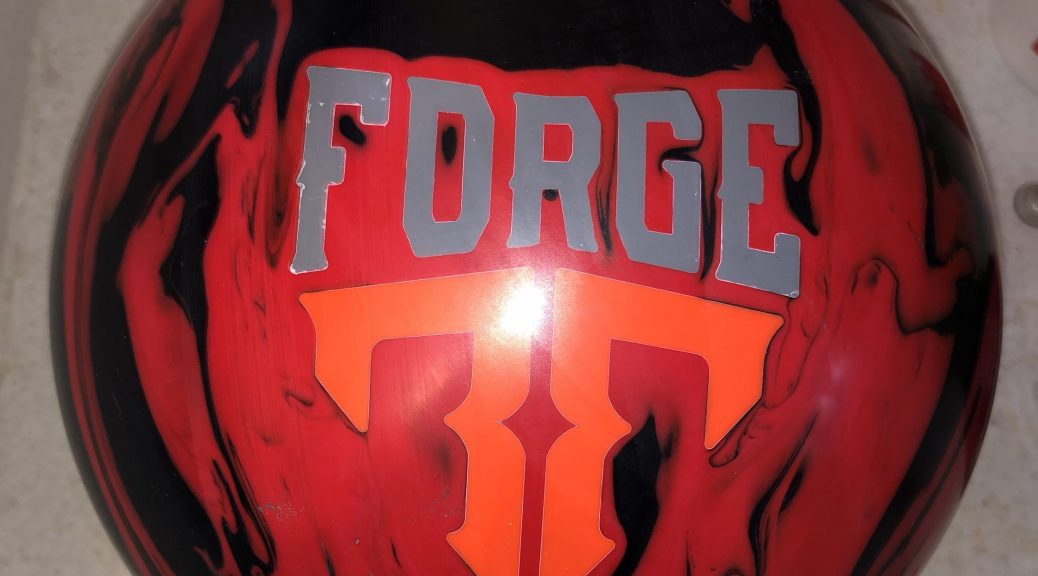 First Impressions
The Motiv Forge is the heavy rolling, heavier oil ball they say it is. Another one Motiv got right.

Value
B+
This is probably a higher score than what I’d normally give for a strong symmetric solid but everyone had a look with Motiv Forge and even at this price point, that impressed.

Overall
THS: B+
Sport: B+
The Forge is a strong solid with a low RG symmetric core. Motiv slots it in the rolly Revolt Havoc side of the chart. That was a very predictable smooth rolling piece. I don’t have a direct comparison but the Forge holds its own by its merits. OK, what’s it about? The Forge is a very heavy rolling ball. With such a low RG and strong cover, the ball churns itself up and wants to really roll. At the same time, it doesn’t feel like it’s really labored. It wants some oil but surprisingly usable on the medium house shot.
Watching Cody first, our higher rev tester, he definitely needs to get it into the oil. So he’s playing between the 4th and 5th arrow out to about 5 and the ball smoothly but strongly trucks back. The rollier character is basically having the core start its transition and so that turnover along with seeing friction brings it back. If you watch closely you can see the core having significantly turned over by 30 feet. Then it transitions from that hook to roll but doesn’t feel like it’s rolled out. It just rolls heavy through the pins. There is a risk that due to that rolly nature, get it out just a bit too far and it will not make it back. You can see that with the washout or the pocket 7-10. You can also see that if he gets grabby it’s going to run hard. Compared to the Villain, it’s a different shape for sure. The Villain does feel a touch longer and smoother but also has that setting asymmetric shape. I wouldn’t call the Villain a step down exactly but if you need a slightly later rolly ball after the Forge is just a bit too much, you would go to the Villain.

I’m next. The big thing for me with the Motiv Forge is to find the area and trajectory on the lane where I can take advantage of that heavy continuous roll. With this much cover and surface strength, you think you need more room through the fronts but 3rd arrow was basically causing the ball to use to much energy side to side. Once I started projecting it on straighter trajectories, the ball began to shine. So 12 at the arrows to 5 or 6 downlane, I really enjoyed how this ball just absolutely punched through the pins. Alternatively 16 to 10 had the same pocket crushing result. The in between was a little tricky, not problematic getting to the pocket but carrying. So 14 to 7 would leave a 7 pin. Part of it is the design of this house pattern. I would use this ball on fresh until the line softens up. Again for me, the Villain is a different piece. It actually is my fresh shot benchmark in this house. The higher RG allows it to get downlane a bit more, storing a bit more of that smooth punch. Both are possibilities now but with different looks.

Finally Bryan tests the Motiv Forge. Honestly, the ball was an absolute beast for him. Many times he worries about strong covers with symmetric cores as they just seem to hit weak. Not the case at all with the Forge. Clearly this is a more powerful motor. He’s going up 10 and this thing starts up and just keeps driving through the pins, shot after shot. Even the light hits shredded the rack. The Villain played a little more backendy with a touch more length as we saw. What I can say is that the Forge was extremely easy for Bryan to point and shoot with excellent carry percentage.

Sport Shot
We tested on the 45ft PBA Dick Weber pattern. Despite the 5 extra feet of length, Cody gets to about the same zone as the house shot going through the fronts at about 23 but using a breakpoint of about 7. The Forge had a smooth but definitive recovery. He walked away feeling almost like the Forge made this a house shot. With the Villain, as expected, it was a bit more over/under as it is a little longer and a bit more punchy. He went stone 9 to ring 10 on back to back shots. Actually really compliments the Forge with how easy it made the shot feel for him.
For me, I like to go up the boards on a long pattern from the left side. 7 to 6 and the ball looked very good. The Forge is absolutely a good match up to this longer pattern. You can see how tricky the pattern is with a one board miss out to 5 almost leaving a 3-7-9. I tried a more inside line and you can see how much the ball shapes. The Villain going 7 to 6 just doesn’t continue through the pins. It’s just a touch cleaner cover with a higher RG so that makes sense.
Finally Bryan is up on the sport shot. Bryan felt that the Forge had the lane read that gave him an easy reaction. You can see the easy midlane motion and that helped him feel comfortable. He can’t exactly open up the pattern but it is a 45ft. The Villain again is a touch longer with a bit later punch.

Final Thoughts
The Motiv Forge is a really good addition to the lineup. It’s well placed and is truly a heavy rolling piece that seems very capable of transferring lots of energy through the pins. Most bowlers might not want to use this ball for lots of side to side motion as it’s not skid/flip. But for its intended purpose, man does this ball truck. Strong syms can become benchmarks for many bowlers. This ball has that reliable earlier roll that is very predictable which fits the bill. It may not be a true benchmark in that sense but any ball with a reliable motion gets a good grade because they make a bowler comfortable. Comfortable means better execution. This motion is bread and butter for Motiv.