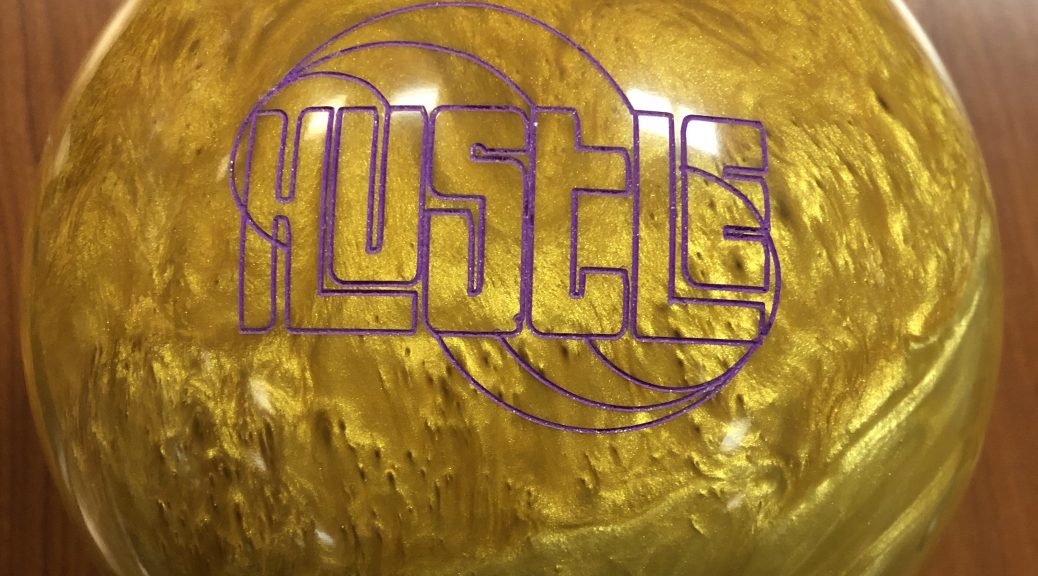 First Impressions
You can stay straight and have forgiveness. The Hustle HSB was my favorite, blending the elements of both the other balls.

Thanks to Jeff Smith and Pure It Bowling for drilling our equipment.
Buy the Roto Grip Hustle HSB, Hustle Au at PureItBowling.com.
Thanks to Limerick Bowl in Limerick, PA.

Value
HSB = B+
Au = B
The Hustle balls have cheap entry. They are both good entry level balls as well as specialty balls in deeper arsenals.

Overall
THS: HSB = B+; Au = B
Sport: HSB = B+; Au = C
The Hustle Ink has been a very successful ball and well known by now. It made a few TV shows and Matt O’Grady won the TOC back in 2017 with a pair of them. We have these other Hustles which bring hybrid and pearl covers. I would say the Ink is most different from those, the HSB and AU whereas these 2 are not immensely different from each other.
Starting with the hybrid, I will say I really liked this ball. It allowed me to play fairly direct without worrying about that massive over/under you can get when playing that close to the house shot friction. I wasn’t perfect but playing around 2nd arrow through the fronts and into the outside friction just seemed to blend just right. It was really easy to strike and if anything, at the minimum supreme pocket control. It is definitely clean with easy length but the low diff core means it comes off the pattern smoothly without a herky jerky motion. Sometimes lower end balls become very flippy and it’s not the case at all with the Hustles which is why they are particularly liked with more competitive bowlers. I just found the ball to be smooth but enough backend to carry. I can just relax and throw the ball up the lane.
With the Au it was playing in the same zone but the subtle differences made it a little less ideal. It was a touch bit cleaner and with that meant it was also a little slower downlane. So it doesn’t quite make it up the hill from the same line. However, if I move even one board left, it will hook too much. So in the oil, these balls don’t respond much. In the dry, they respond smoothly. But since the pearl had to be played on the same line as the hybrid, the reaction was less ideal due to the weaker backend angle.
The INK just for context is a bit earlier allowing for more time for backend, even while being smooth. It’s just a different shape.

For Bryan, he really saw pretty much what I described for myself. He is a touch more direct going through 8-9 at the arrows and seeing the the smooth but definite backend. Pocket was fairly easy to find. Most of his misses were in or at least read early because he is pointing the ball a bit. With the Au, again it was a touch cleaner and he tried to move further into the dry on the right to get it to face up more. However, that meant through the face, just as I saw. So he had to work a really tight line. Interestingly, even more direct, opening the angles to the outside and the ball didn’t make it back. The Au is just cleaner and weaker. Not the best match up for Bryan. The Hustle INK was about 2 and 1 stronger than the hybrid.

Jeremy was next. Ultimately these balls just felt too weak for him. He wasn’t far enough right for the most part and so struggled to point these balls to the pocket while still getting carry. Sticking to near the 3rd arrow meant he had to pull his break point in as well but then it’s in the oil in the fronts and backs. That’s just not good for these balls, doesn’t matter which Hustle. Can’t say much more about the deltas as they are pretty consistent and narrow.

Sport Shot
We tested on the 40ft Kegel Abbey Road pattern. Starting with the HSB, I was completely taken by surprise with how good a look I had on the sport pattern. I could play again pretty direct about 11 to 7. I missed 12 to 9 and thought through the face. Then I strike and think, whoa hold! Then I miss 9 to 5 falling off a shot. It comes back to tickle them down. I was thinking could this have been what I needed to master this pattern? Regardless it was really fantastic. With the Au, I lost some of that magical balance. On the same line it worked. However, I tried to simulate the same misses and in wouldn’t hold while it was a little too easy to scoot easily past 5. So close but no cigar. The INK looked similar to the HSB but now the primary line rang a corner pin instead of carrying.
Bryan had about the same look and about the same delta. Surprised with what the HSB did, difficult to manage the Au. The INK being a touch stronger than the HSB meant moving in a bit more and losing backend motion which made it tricky. The HSB would be the only ball Bryan would remotely consider for this type of pattern.
Jeremy saw pretty similar motion but still struggled for the same reason he did on house, just not getting direct enough but getting no added control from the ball on this tougher pattern.

Final Thoughts
It really felt like the Hustle HSB was the goldilocks of the 3. It’s the one that had the right length with the right amount of backend to work for Bryan and I. It was also surprisingly good on the sport shot, even in the OOB shine. Ultimately these balls will offer a control entry level ball or control specialty ball in a deeper bag.