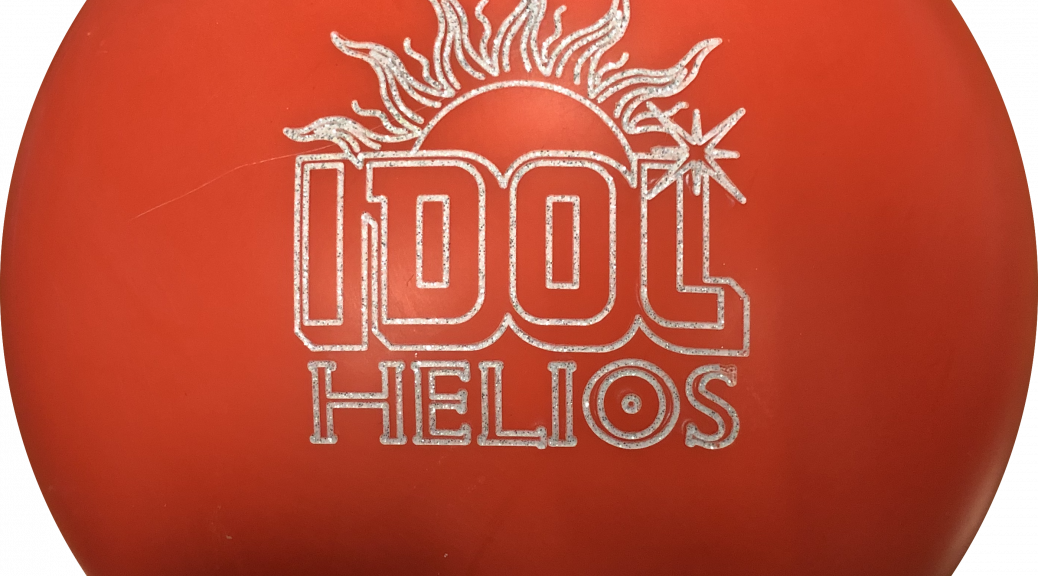 First Impressions
If you liked the OG Idol, you are likely to like the Idol Helios.

Overall
OK, let’s talk about the Orange ball.  I have to think of a good name for the Idol Helios.  The original is pepto-bismol.  Right off the bat, you know this is another solid Idol.  No surprises. It’s not just another Idol but Roto Grip made sure that the Helios overstock formula didn’t stray far from the original, given that it’s discontinued now but still much beloved.  We know the Ikon core is capable of popping down lane as we saw with the Idol Pearl but here we see the original formula, early read of the lane and a smooth transition.  It fits right into the Strong Control part of the arsenal, although for some it could be Mid Control.  When I first threw it, the Helios started so early it looked more urethane like than the Rubicon UC3 we tested in the same session.  It also looked like no way it would hold pocket from that read but it did, every time.  I had a great look for a good amount of time.  I approach the test by moving a board right each ball.  Lots of strikes and then I get to the point where I’m going through the 3rd arrow and I start to see the flat 7.  The balls roundish backend was not angular or continuous enough to carry.  I had to find different ways to carry from there.  Try to get to the friction earlier or find the light swisher.  I was able to strike from as deep as the 4th arrow but I did have to manipulate things to carry beyond the 3rd arrow.  It’s no big surprise but when I was able to be a little more direct, it was spectacular.

Here are a few 2-handed shots.  It has that nice smooth shape that I can see higher rev bowlers liking, just like the OG pepto-bismol.   Throw it good and you are generally rewarded.  I guess it’s never surprising to leave a ring corner at times.

A Stroker’s Perspective
Bryan gets his chance to test the Idol Helios. Not sure if you will watch this review first or the Rubicon UC3, but sadly for Bryan the results are somewhat the same. The Idol Helios ultimately was more workable for him but he had to really work at finding the right shape, release, and speed to find it. On the house shot we test on, that high outside friction and strength of cover and core on the Helios meant he couldn’t quite play up the friction boards. If he moved in a few boards, he had a soft hit as the Idol Helios just starts to early and is too smooth downlane. If he straddles the oil friction line, he actually got over/under. Depending on what distance he pushed it into the friction, he went from soft corners to buckets to high on the head pin. Just too big of a variation. The Idol Helios has that strong early start up but then uses too much energy in that wind up not leaving enough to drive through the pins for Bryan’s game. Ultimately, what he found effective was to go back into the friction to the right and amp up the speed. It’s all somewhat logical but big picture somewhat disappointing for him. In our test of the Pepto Bismol, I mean original Idol, he really liked it. It was smooth but a touch later and a touch more punch and that balance meant when he straddled the house wall, it blended it more nicely. The Helios just uses a bit too much energy a touch earlier and that small delta was enough to make it that much more difficult. Again, this was a big contrast to what I saw so evaluate for yourself. I think this will work better for Bryan when it’s a more tapered shot with high volumes in the fronts.

Final Thoughts
At the end of the day, I initially thought the Idol Helios has a little more pop than the OG Idol.  However, I think it might be the reverse.  The Helios reads even earlier and is a smidge smoother.  Ultimately, what I found is when you need to control the lanes and there is good volume you have to manage up front, meaning more direct angles, the Idol Helios is going to look great.  If you have to open up the lanes too much, it’s probably not its forte which is OK because there are other balls meant for that.