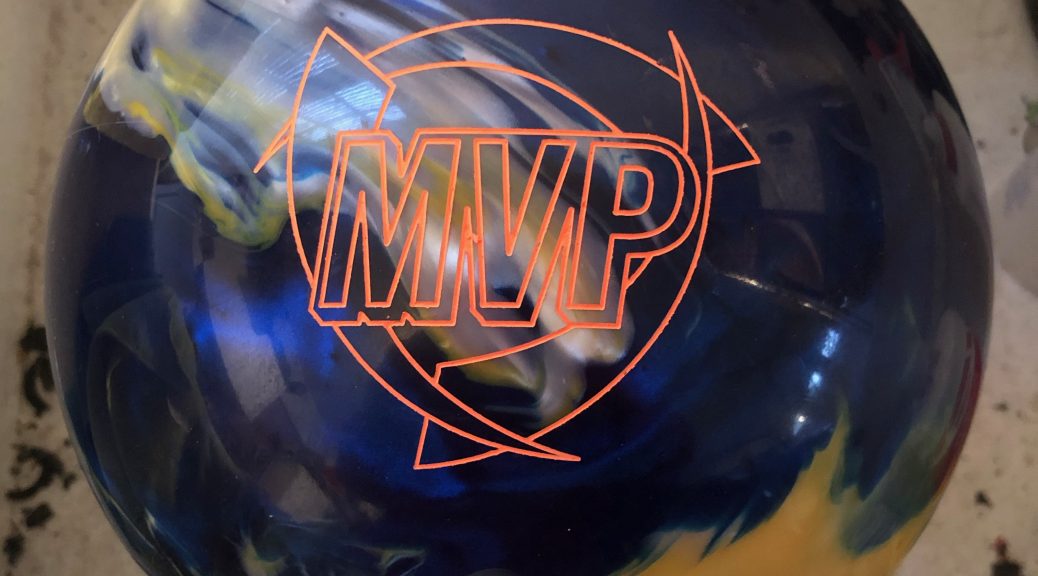 First Impressions
Another good looking ball that just feels like it punches above its weight.

Thanks to Jeff Smith and Pure It Bowling for drilling our equipment.
Buy the Roto Grip MVP Pearl at PureItBowling.com.
Thanks to Limerick Bowl in Limerick, PA.

Value
A
Another HP2 line ball from Roto Grip that hits the mark. They continue to pack in strong value and good performance.

Overall
B+
We are doing something a little different to try to simplify the reviews but still give you in depth information. For the MVP Pearl test, we used a Challenge Pattern, Beaten Path. The idea is to use a pattern a little tougher than house shots and a little easier than sport so we can still see where we have room for forgiveness while still being able to see the true motion of the ball.

The MVP Pearl is very similar to the hybrid MVP. Medium high RG with a medium diff tends to lead to fairly versatile medium balls. They could be benchmark type reactions. Basically I said this ball has no trouble getting downlane but definitely has a strong downlane motion. It’s not exactly what I would call skid/flip but certainly one that goes in anyone’s eyes. Again, I like balls I can trust will move downlane and I can adjust to it. The Pearl and Hybrid are almost identical in shape. The small difference in the coverstock are hardly noticeable except to the discerning eye. This all comes down to the same factory finish. I know Luke made a small adjustment to the layout to have some variation. I chose not to do so. At the end of the day the difference is very minor. The bottom line is this: Firstly, this is not really a fresh shot ball. Save this for when the pattern opens up a bit. This is the prominent characteristic. We loved the shape. Throw it right on and you are rewarded with a beautiful shape and good drive through the pins. Misses in are a little touchy. It’s angular so it won’t hold until you give it enough room but you know once you’ve gotten a bit too deep as you start to leave corners. The minor difference I saw with the MVP was I could carry from about 1 board deeper before I leave that pesky corner pin. The core does seem to right itself ever so slightly earlier which appears to give it a bit longer roll phase. On lane, hardly noticeable.

Sean was next. I think you can see the shape is really nice. It doesn’t feel like it’s super long. For context, the Phaze III felt longer out of box. The reaction felt very well balanced and it was very easy for Sean to use on fresh. The benefit of his higher rev rate meant that he could miss out and have it recover whereas I could not. Granted left vs right side is also different. Nevertheless he had just the right amount of length without feeling like it’s going to blow through the spot. It had a nice visible transition and really good hit through the pins. There are some balls that just “feel heavier” I don’t know how to explain without spending an hour but it just feels “dense”. Misses in generally are tougher to get to hold because of the balls angularity. A quick look at the MVP also shows for Sean it is ever so slightly different with a little earlier roll so actually looks a bit more angular than the MVP Pearl.

Now Bryan gives it a go. Firstly, he really enjoyed the ball reaction. We always start on fresh and he can tell the ball is a bit touchy. Throw it correctly and the reaction is really pretty. It’s just that there isn’t much room to miss on fresh. He squared up a touch to find a little forgiveness from misses right to take advantage of the downlane angularity. Nothing surprising here. Misses in still will not hold so there was more room out. However, where it really started to shine was as the pattern started to breakdown. As the pattern opened up a bit, he can now move a touch left and now catch more miss out giving him more room down lane. Carry was very good so Bryan really trusted it. So getting comfortable and missing out a bit still gave him the swisher carry. With the MVP, again he can hardly differentiate them. Probably a torn which one he likes better but he really likes both.

Final Thoughts
The MVP Pearl is a high value piece. Entry level price and high performance. It feels bigger and hits stronger than it’s price point. It rolls great but save it for some breakdown. On fresh it will feel a bit over/under. While the hybrid MVP is hardly different, you can differentiate them. How, putting a little surface on the MVP and leaving the Pearl as is. I think the Pearl is perfect as is. Just use it at the right time and you will be rewarded with good motion and good scores.