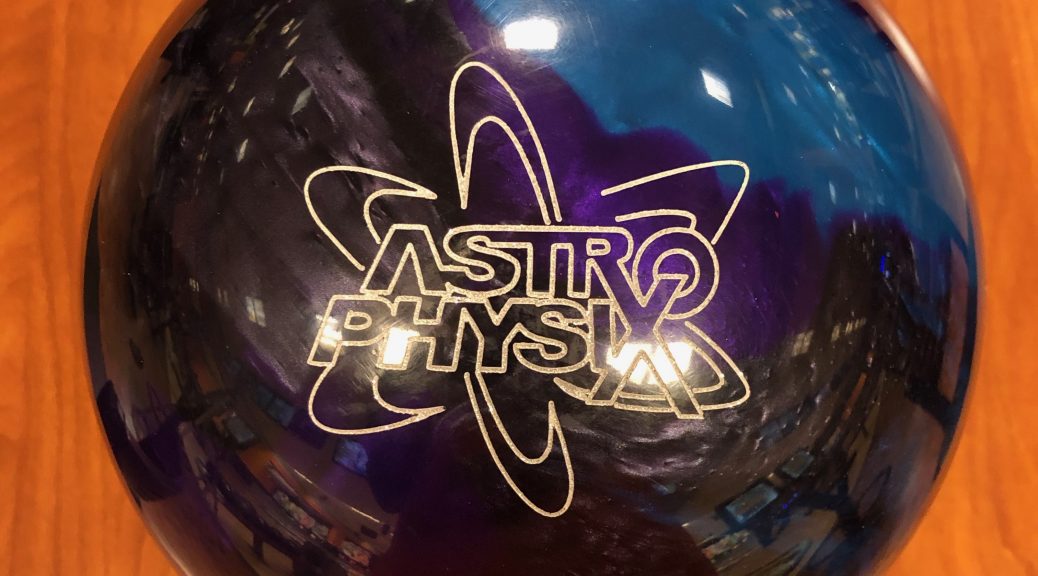 First Impressions
The AstroPhysiX looks great, rolls great. Very impressed instantly. Storm is going to sell a ton of these.

Thanks to Jeff Smith and Pure It Bowling for drilling our equipment.
Buy the Storm AstroPhysiX at PureItBowling.com.
Thanks to Limerick Bowl in Limerick, PA.

Value
A
This pearl asym deserves very high marks for value. It’s going to be versatile with the medium R2S cover and strong core.

Overall
THS: A
Sport: B
Not an unexpected follow up adding adding a pearl asym into Storm’s premier line. Instantly, the AstroPhysix is impressive. This follows a similarly successful formula of the Code Black. Put a moderately strong asym core inside of a medium strength pearl cover and you get a clean look with strong backend. But not just strong backend but one that really punches hard with the strength of a big asymmetric core. I struck every ball with the AstroPhysiX. This was one of the most comfortable reactions I’ve thrown, right up there with the Black Widow Pink in terms of just getting up there, getting it to the spot and watching it drive through the pins shot after shot. It’s not exactly skid/flip like the Code Black was but definitely makes a strong move. It just seemed to have the ideal motion wherever I put it. I got it out to the friction and it stood up and barrelled through the 8-9. Pull the breakpoint in and it still went through the 8-9. Even when I stood up on some shots, I was able to take out the 7. This is a very different formula than the Physix that uses a very strong cover which makes it much slower overall to friction and way more aggressive in terms of oil handling.

John is our latest staff tester. He liked the AstroPhysiX as much as I did. He obviously has a higher speed and rev rate. With that, using the 3rd or 4th arrow, there was plenty of room. The ball seemed very forgiving and just funneled itself into a strong position to carry. From out to the friction, it generates lots of angle and makes it back. From in, it settles and hits heavy. There were several light hits that carried off the wall or with huge messengers. I think in all the test shots, he left maybe 2 10 pins and a 7 pin. It was just really easy to toss on this house shot.

Next up is Bryan. My initial expectation was that Bryan would see as good a look as we did. Overall he did have a good look. The AstroPhysiX was long and angular but did set a bit more obviously for Bryan as an asym. That meant that entry to the pocket varied a bit. Nevertheless carry was pretty good if not a bit less than mine and John’s. The setting of the core seemed to cause a bit more deflection. The best look as to make sure he bounced it into the friction a little early to get drive. Misses in at the breakpoint or getting out too far downlane caught too much oil risking bucket type leaves.

Sport Shot
We tested on the 35ft Kegel Boardwalk pattern. I would never use a shiny piece on a fresh sport pattern but did want to at least get a read of how the ball rolls on sport patterns where the friction is at the end of the pattern vs the side. Honestly, from what I saw, this looks like it could be a very good option when sport patterns breakdown or put surface on it for fresh patterns. Given how good it looks with shine, I’d probably leave it alone and take advantage of its strengths.

John is next and you can see how much angle the ball can generate. It may not be the traditional short pattern line but it is broken down a touch and he was comfortable throwing it from deep. As you can still see, there is some wiggle as it is still a flat pattern. Nevertheless, it gives you a chance to see the motion off of friction which is very aggressive.

Finally Bryan is up and here he felt fairly comfortable on this pattern with the AstroPhysiX. Since it has an aggressive downlane motion, he was able to take advantage of that to get nice drive and pocket.

Final Thoughts
I sometimes worry that using a medium cover on a high end ball defeats the purpose but as we’ve seen before, Storm does this to very successful effect. The R2S cover is long and strong along with an asym core, making the Astro versatile. It does make it less effective on the heaviest oil patterns but it seems we bowlers rarely get to see that. So making a high end ball more usable adds to its bang for the buck. It’s not as flippy as the Code Black but plenty angular to satisfy those who loved it. It’s also more responsive and a step down from the Halo Pearl to be a compliment rather than cannibalize it. Honestly the AstroPhysiX is going to be one of the top pearl asym offerings on the market.