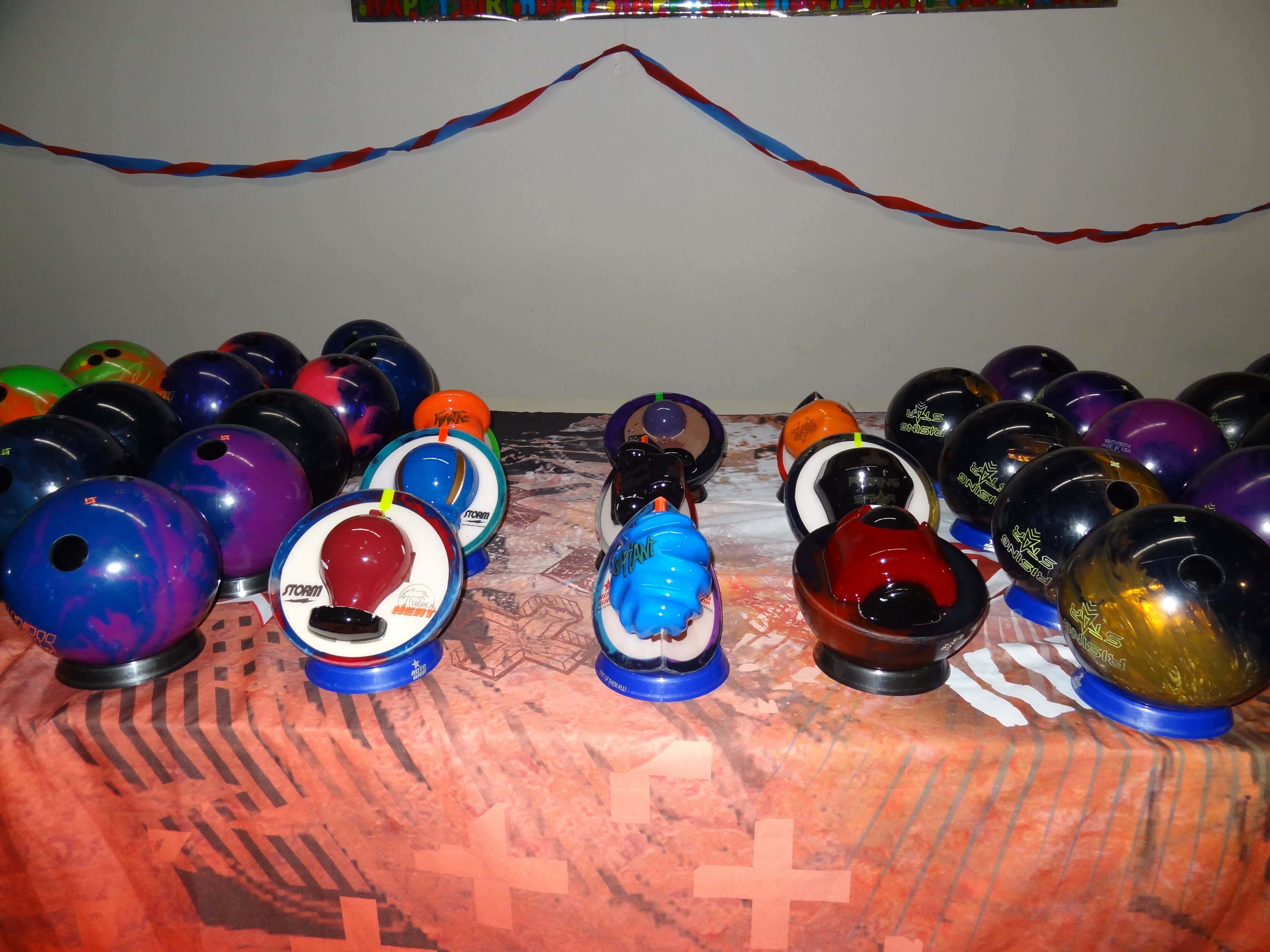 It was good fun to do this again.  For those who don’t know what this is or have never been to one, it’s pretty cool.  It’s basically a demo day.  It’s a day when a manufacturer, in this case Storm and Roto Grip come out to a local center with 100 balls or more, all from their current lineup, and allow bowlers an open session to test out all their latest equipment. Basically, they start by fitting your hand.  You get a switch grip for your thumb and fingers.  They will tell you your span if you don’t know it.  Then you find a ball that you want to try, look for the ball that matches your span and weight, stick the switchgrips in and go to the lanes.  You can try almost every ball in the lineup, although at times the balls about to be discontinued or the lower end balls are not available. The balls available for testing included:

We can usually gleen something from the balls missing so we can start there.  From either, it’s not totally surprising the Urethane balls were not there, although the last time I attended a MatchMaker, they were. However, with the Infinite missing, it tells me it’s likely on its way out. With the development of the Paragon core, it would seem this will cause the eventual phasing out of the Trilliptic core in the Theory line. I know Roto Grip has created a new line called the Royal line, just above the Crown line. We’ll see what happens, but I guess a pearlized and hybrid versions of the Defiant will be up next.
From Storm, the Marvel is still around while the Marvel Pearl is pretty new. They’ve also announced the Modern Marvel which seems to replace the Prodigy. This core appears to have some good success so looks to be around a bit longer. Although the HyRoad wasn’t there, as long as it continues to be the best selling ball, I imagine it will hang around. With the announcement of the Crossroad, we’ll see if Storm has finally found a true replacement. It will likely be the closest attempt yet. The 2Fast and 2Furious have been around a bit, even though the Frantic using the same core is fairly new. My guess is they will be phased out relatively soon.

Now to the fun part…
If you’ve been following TamerBowling you will know we’ve tested most of these balls already. So this is an opportunity to round back and compare some of the newer equipment.

For Roto Grip top down…
The Defiant looks to be a very promising piece. I usually don’t go crazy over heavy oil pieces but this one is very interesting. When we tested the Critical Theory a little while back, I really felt it was one of the strongest balls around in the sense that it can cover heavier conditions, but still stores lots of energy for a big move on the backend. The Defiant is quite a bit stronger, but maintains the same characteristics in that it keeps coming on the backend. When I tested it, it seemed so versatile. Not that you’ll be able to use it on dry conditions, but rather it is capable of carrying from many different lines to the pocket. I tried 10 to 8, 13 to 7, 15 to 7, 18 to 7, 20 to 6, and 22 to 6. Each time, the ball continued to make the move back to the pocket. I finally got just past 22 at the arrows when it finally left me a flat 10. It’s not flippy, but really seemed to have a more defined move than the Virtual Gravity Nano. It seems to smooth out the lane and release differences. This ball was just a tad more impressive than the Critical Theory when we tested that.
It should be clear the Critical Theory (review) is a step down from the Defiant. Depending on how you bowl, it can be a couple of boards to 5 or 7.
The Outlaw (review) is honestly one of my favorite balls. It’s a stronger ball but so consistent. I wasn’t 100% sure whether I would like the ball reaction when I saw the core on paper, but I was so impressed by it when I threw it. I think it’s going to be one of those balls that are known for the cover and core matching up extremely well.
The Bandit (review) will serve a lot of bowlers who like that more angular pearlized reaction. It is a good step down from the Outlaw. This ball defines skid/flip so if you’re looking for that reaction, it’s a good option.
When you talk about bang for the buck, the Shooting Star (review) and Rising Star are two fantastic balls that fit that bill. The Shooting Star is that really nice control ball that has lots of movement and strength, but excellent predictability. Same is true for the Rising Star, but due to the hybrid coverstock, it gets a bit more length so it will look a tad more flippy. However, take a look at the Digitrax analysis and you will see that neither ball is lacking in the backend department.

Switching gears to Storm…
For now, there’s nothing new to say about the Virtual Gravity Nano (review) and Nano Pearl (review). However, I will say that my take is that the Defiant is more versatile and stronger. You have to watch the two ball reactions and decide which one matches up to your game. In the meantime, Storm will be releasing the Vivid soon looks to be of similar strength, but introducing a new core. It will likely have a slightly more defined move than the Virtual Gravity as it adds some contours to the weight block.
The rest of the Storm lineup, I’ve reviewed at length so I didn’t gain any new insight here. However, I did get to test some pin down balls which is different to what we’ve tested previously. For my game, it’s not the preferred location so wasn’t too helpful.
The news is that Storm is releasing the Crossroad. If this ball is successful, it may finally be the ball that replaces the venerable Hy-Road. It will use the same Hybrid R2S cover with a modified core from the original. It will be interesting to test this one.
Also, the Modern Marvel will be released which is a hybrid Marvel. This ball will also be interesting to see. The Prodigy is gone so this replaces it with a slightly different cover.

Considering how much of the market Storm and Roto Grip has, it’s good to see that their still putting out interesting equipment. Storm doesn’t seem to stray too far from homebase. They know what works and repeat it over and over. Roto Grip on the other hand strays a bit further trying some new cores recently. I see Roto Grip as being the slightly more edgy brand while Storm is now becoming the stalwart.

So if you like Storm/Roto Grip, you have a few more pieces to spend your hard-earned money on.

9 thoughts on “Storm Matchmaker in Toronto”