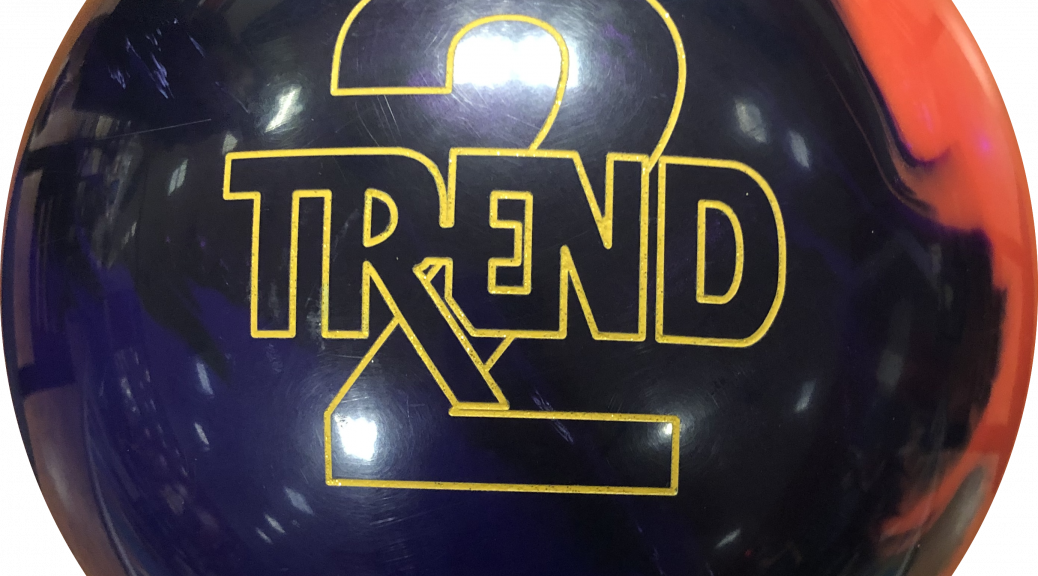 First Impressions
The Trend 2 looks to be a strong offering reminding me of a couple of balls I’ll discuss shortly.

Overall
OK let’s jump in. I mentioned in my making video that the new Storm Trend 2 from Belmo now has the NRG Hybrid coverstock with a modified Piston LD core. That brings down the Diff to .041 and that’s something I really like. I feel like low 40s for diff is the sweet spot for the most versatile balls in general. So what did I see? I will firstly say I struck a lot. This is a house shot and as most, they are set up cliffed. Lots of friction outside and lots of scoot inside, meant to create lots of room for error. I’m not going to get into why I hate these patterns so back to the ball. I was able to start left, cut my axis rotation down a bit and get a monster hit. The ball was pretty easy to get down lane with its shiny finish. Seemed to read the later part of the pattern and have a bold move slicing through the pins. If I was bowling for score, I’d stay there for as long as it held up. Anyway, I started moving in and you can see that it’s still very playable. I could chase it to the 4th arrow and it still would work. Let’s talk about the nuances a bit. I mentioned versatility and in that regard, I think this ball could be in the middle slot, the mid control. Shiny ball? Wouldn’t be the first time. It’s not the skid/flip ball meant for lighter conditions the OG Trend is so a step up from that. Honestly, my first thoughts were this ball reminds me of an oldie the Virtual Gravity Nano Pearl but much more so the recent Axiom Pearl. Not quite as strong but not a baby Axiom either. Why? Because there is a good midlane read and having a bit of forward smoother characteristic. The trick here is the underlying strength of the cover gives it some midlane roll while still getting some energy storage. Add the benchmark like core and it makes it not too long, not too flippy, not too strong, not too weak. Ultimately you get some control out of the typically strong Storm shiny motion which could slot it early on medium volume patterns. I like when shiny balls are medium because sometimes you need length but not necessarily snap. This is probably still a little strong downlane but not crazy snap. Overall still very effective for me. Would I have the Axiom Pearl and Trend 2 in the same bag? My first instinct was eh but actually I would say you could. The Axiom Pearl for me fit in the Mid defined category and while I think they are pretty close, I feel like the Trend 2 is a bit more of the mid control slot.

The Power Player’s Perspective
Welcome back. Today Sean is testing the ball to give us a power player’s perspective. So where do I begin? First thing, the ball essentially behaved like a pearl in the sense that it was pretty long and didn’t do much in the way of transitioning until after the end of the pattern. That’s not surprising given the 1500grit polish and the higher RG which promotes a bit of lope. The downlane reaction is relatively strong to play more direct than 13 or so at the arrows but it also doesn’t jump off the pattern strong enough to be much deeper than the 4th arrow. So in that window he saw a pretty smooth reaction. If anything, it erred on some amount of under reaction. He didn’t go from 4 pin to strike to bucket. He basically had to get enough away from the friction direct but once he did that it was either right on or a little soft. It feels like this is a bit more of a breakdown ball. When the conditions start to open up and you can wheel it, that relatively smooth shape will be easy to use and come into play. Again, relative to the first Trend, this ball will definitely feel smoother off the end of the pattern. This is probably a bit of a mid late + type of ball for Sean. So a small step up from the Trend with a bit more smoothness.

The Stroker’s Perspective
Welcome back. In this installment Bryan tests the new Storm Trend 2. Hopefully you’ve already seen how the ball looks for me as a tweener and this would interest you if you are more of a stroker style especially with some tilt. In many cases what Bryan and I see are not very different. The magnitude of the difference isn’t typically the difference we might see from a high powered player for example. In this case, I feel like the gap was bigger than normal. We are on a fresh medium walled house shot. That basically means get it out to the friction and it roars back while misses in sit. Bryan started in the 8-9 to about 6-7. This is playing the edge of the friction essentially. He saw a fairly mediocre look. Over/under without lots of drive. He tried several different tricks to get it to work. Move in, push to the dry, more direct, varying speeds, various combinations. All pretty tricky with nothing really consistent. Eventually he found something pretty direct up 7 and a little firmer. Certainly he would wish for a more consistent reaction and it simply means for Bryan’s game, the Trend 2 is not as good a match up for a fresh shot. We eventually touched the surface with a 3000 trucut pad which improved it a bit. Found the pocket more consistently for sure. He did a quick comparison with his Marvel Pearl and the Phaze III. The Trend 2 was more ball than the Marvel Pearl for him as it is now his go to step down mid late reaction. The Phaze III which is like a Mid Defined him clearly has more oomph and consistent drive. It makes more sense for him. Ultimately the Trend 2 looked marginal for Bryan on this fresh walled house shot. It may make more sense as the pattern breaks down but he feels like he wants a little more motor than what the Trend 2 offered to make his bag.

This is our 3rd installment and by now you should have seen Sean and I test the Burner Solid. It looked really quite good for both of us. So what does Bryan see with his style? Would it really be a big surprise to say that the Burner Solid looked really good for Bryan as well? It shouldn’t be. Bryan was a little more direct than Sean and I and again, we have a fresh shot with a medium weak ball. However, the ball found a home between the 1st and 2nd arrow, really quite on top of the friction more or less and it really had no issues coping. Bryan could get it downlane even that close to the friction and the ball had that sort of smooth mid lane read but clear pop down lane that really helped the carry percentage. I talked about how it compared to the Raw Hammers and while those didn’t generate big entry angle but carried the scatter hit, the Burner Solid just turned hard enough to not need the scatter hit. Low end balls can be a crap shoot for Bryan or fit in Specialty slots in the arsenal but the Burner Solid really acquitted itself in way he would need to consider it as potential mid late type look.