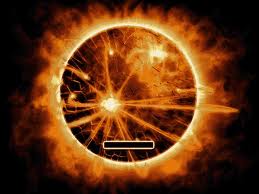 What does it mean???

Flare: To expand or open outward in shape.

First, let’s define ball flare itself. When a ball flares, that means that as it rolls, it continues to migrate to a different axis with each roll. It does this until it reaches it’s preferred spin axis. At that point it simply rolls end over end. The easiest way to visualize this is when you throw the ball. The rings of oil draw the flare for you. Every time the balls has one complete roll it will shift to another axis, creating a new oil ring. If you threw a ball with no dynamic core, like a polyester spare ball, the ball will simply roll end over end. So it will keep rolling over itself, showing you one oil ring. (Don’t confuse this with the direction of the roll. You can still get hook because your wrist motion creates side roll.)

The amount of flare potential is firstly defined by the core design. Then the rest is dictated by the drilling and the amount of revolutions a bowler can generate.

Say a ball can flare up to 4 inches. That means that the width betweeh the first ring and the last ring of oil can be up to 4 inches. Then let’s say I can personally rev the ball enough to reach maximum flare. For me to actually achieve that max flare, I would have to drill the ball to achieve such flare. Now if I drill that ball with the pin above my fingers and the cg pretty close to the palm, I will be drilling a ball that will have relatively little flare. If I drill that same ball with the pin to the right of my fingers, closer to my PAP, I will be creating a ball that will get pretty close to its maximum flare.

“Can you explain further?”

With the pin above the fingers, you get less than maximum flare. This type of drilling tends to allow the ball to go longer before it makes it’s move. That’s because the core is pretty close to its axis already and fairly stable when it leaves your hand. So it will tend to skid longer since the core is not making as dynamic an impact on the ball roll. Rolling over the same ring causes a ball to go longer because of the residual oil on the ball. Then the ball hits the end of the pattern and finally hooks and rolls. You basically shrink the hook phase and you are more likely to get a skid/flip type of reaction from such a drilling.

With the pin to the right of the fingers (for a righty), you get more flare. That’s because now when you release the ball, it begins to roll on an axis which is not preferred. So it will migrate to it’s preferred spin axis as it rolls. This migration creates flare. So the lane contacts the ball on a relatively fresh part of the cover each time it flares. This makes the bowling ball a bit more aggressive. That will give it an overall stronger reaction. It will read more of the midlane and maintain a relatively strong backend. Generally this type of drilling will cover more overall boards than the pin over drilling. So in theory, you will see a smoother, but stronger ball reaction with this drilling.

There are other things that will impact ball motion like cg location, mass bias location, weight holes, etc., but that’s for another time. I don’t want to complicate this by getting into complex drilling methodologies so let’s just keep some simple concepts in mind.

That’s all for now. We can go into further depth in a future article.

4 thoughts on “What is Ball Flare?”