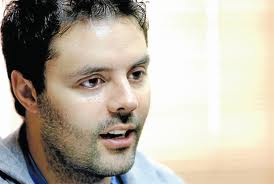 Jason Belmonte talks to TamerBowling.com about his chances of winning this year’s PBA Chris Schenkel Player of the Year.

I had the pleasure of interviewing Jason Belmonte recently. The Australian two-handed sensation had a phenomenal 2011-2012 PBA season. It’s clearly a 3-way battle between Belmo, Sean Rash, and Mike Fagan for Player of the Year.

In case you weren’t aware, Belmo had 3 PBA wins at the World Series of Bowling He also had a very strong showing at the majors falling short of winning one, but finishing 3rd at the US Open and Tournament of Champions, 4th at the World Championship, and 9th at the USBC Masters. He had a very consistent year across the board, finishing second in points behind Sean Rash and third in average behind Rash and Mike Fagan. However, since the Player of the Year is being decided by a vote this year, the statistics are only part of the story.

Well what does Jason have to say about this season and his chances for Player of the Year?

Watch the interview as he talks about:

This is part one of the interview series with Jason.

Keep in mind we did this interview via Skype so there were some minor glitches.

Jason gives his thoughts on the State of the PBA.

Jason leaves us with some personal stuff…