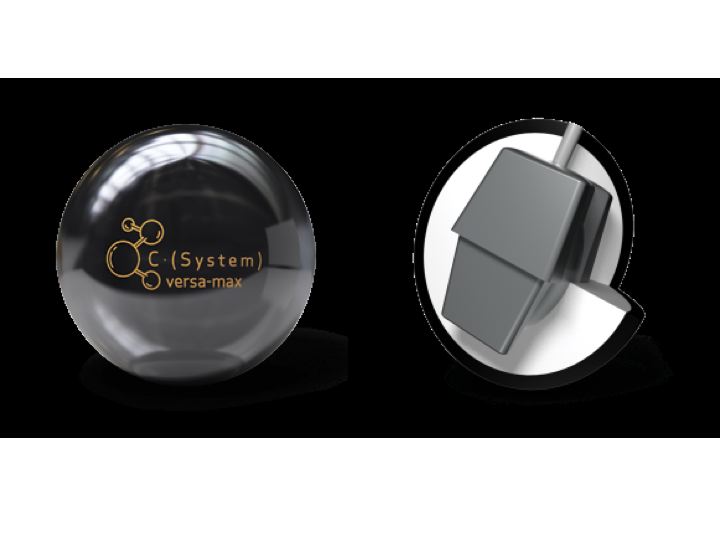 Another versatile piece from the Big B! Our latest tester, Joe Ciach, is testing the Brunswick C-System Versa-Max. Joe has an impressive and very long resume including 9-time Team Canada Member. He was the 2010 Players Tour Champion in the Greater Toronto Area, World Cup in 2008, and countless tournament wins. Joe is a right-handed rev-speed matched power stroker. We performed the test on the 42 foot Kegel Stone Street pattern. This is a longish, medium-heavy THS pattern.

First Impressions
The ball is aptly named. It is very clean through the fronts and makes a consistent booming move on the backend. I want to compare this ball to the Wicked Siege in terms of versatility, but is probably punchier on the backends.

Price 9/10
The Versa-Max is a mid-price ball and offers good value for the money.

Core
The Dual Flip I-Block core has an RG of 2.54 and differential of .052. It creates a relatively strong but smooth move at the breakpoint.

Cover 8.5/10
This cover continues the C-System technology for Brunswick. They finished this in 500 Siaair, Rough Buff, then High Gloss. They’ve designed this cover to be very clean through the heads and it is. This allows for good energy storage so the ball makes a nice move at the breakpoint. The ball was designed for medium to medium-light conditions which will really allow it to be very versatile. That’s because most of the time, these are the conditions that bowlers face on THS. It is not ideal for medium-heavy conditions, but it was playable nevertheless.
Reaction 9/10
Since we tested this on a 42 pattern which is a little bit heavier and longer than what we typically see, this ball was playing relatively direct. While I would normally not tell bowlers this would be the best choice for this condition, it truly rolled well and showed it’s consistency and predictability. You will see in the videos the more direct line. Joe doesn’t typically bowl that direct. However, he was still able to strike at will from this line with this ball. This ball really does remind me of the Wicked Siege, but just a touch longer and more angular.
We tested this ball alongside the 3 Nexus balls, Nexus f(P), Nexus f(P+F), and Nexxus f(P+R). This ball played the most direct. However, it played more consistently then the more angular Nexus f(P) pearl. While the Nexus pearl was over/under on this pattern, this ball did admirably. You can also see that the ball had an earlier breakpoint than the rest, but still generated over 6 degrees of entry angle which allows it to enter the pocket with good strength and continuation.
You can see the Digitrax analysis below. Overall 9/10
This is one of those balls where if you had to have just one, it qualifies as a good candidate. It may not be the best choice on the heavier patterns, but is definitely consistent and predictable. When you face medium and medium-light conditions, which is most of the time, this ball can easily play all night.