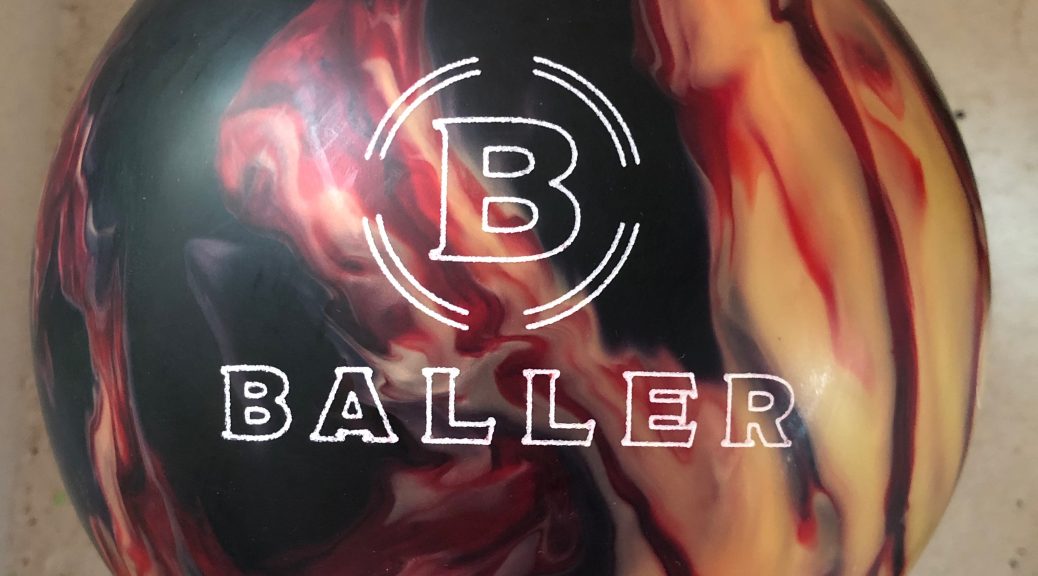 The Baller Throws Down… Thanks to Jeff Smith and Pure It Bowling for drilling our equipment.
Buy the Columbia 300 Baller at PureItBowling.com.
Thanks to Limerick Bowl in Limerick, PA.

Value
B-
The Baller will find use on house shots for those needing a little help from a big piece. For others, they will require more volume.

Overall
THS: B
The Baller to be sure rolls like your typical big asymmetric ball. It has a heavy roll. The cover has some teeth out of box. Being a hybrid, it also has some angularity downlane. It does have a defined motion as you would expect meaning there is a sharper transition from hook to roll. It definitely forced me in. I’ve mentioned this before but I don’t have lots of tilt but do have lots of axis rotation. This typically means sharp truer movement, i.e., less forgiveness. So I can read the angularity the ball has. At the same time, if I miss it at the bottom it’s clearly softer. What I found is I definitely needed to open up my angles to get the best out of this ball. It has a medium RG but still has a good midlane read from the cover. That medium RG allows the ball to store just a touch more energy for more angularity. It definitely has that heavy roll with strong down lane motion. I found that I couldn’t miss in as it never held. It’s just too strong.

With Sean, strong asyms had typically be unnecessary and sometimes frankly unusable. However, we have been surprised in the past and the Baller adds to the surprise list. With less axis rotation, he was fairly easily able to take advantage of the big asymmetric heavy roll. Since he’s playing closer to the friction, it also starts up even a bit earlier. Visually, you can see that heavy roll just driving through the pins. It really looked quite good for Sean. We would have thought oh too much surface or oh too much ball. But no. It allowed him to play in the track and crush the pocket. The ball gave him a very true read of the lane and pattern. If he was a bit too direct, the ball told him. If he was a touch too deep, the ball told him. It offered really good control.

For Bryan, we had a different picture. He had to experiment quite a long time to find the shot. The big issue was figuring out how to use the cover strength while finding the right angle you need for the backend. When trying to move in to give the cover room but keep a tight breakpoint, the ball never held. Same line with a little more room at the breakpoint deflected. Moving outside to be more direct wouldn’t stay on line. He eventually settled around the 3rd arrow and let the ball loop back to hit. Again, the ball is too angular to just play up the boards on this house pattern. He needed to open up his angles but find the right place to play on the lanes.

Final Thoughts
My initial impression stands. The Columbia 300 Baller is a good strong asym. It offers what you expect and Columbia 300 fans will not be disappointed. The one thing I’ve established is that I’d rather have a ball that shapes and I adjust as opposed to a ball that won’t and I have to shape it. This ball is in the former category which bodes well for many bowlers.