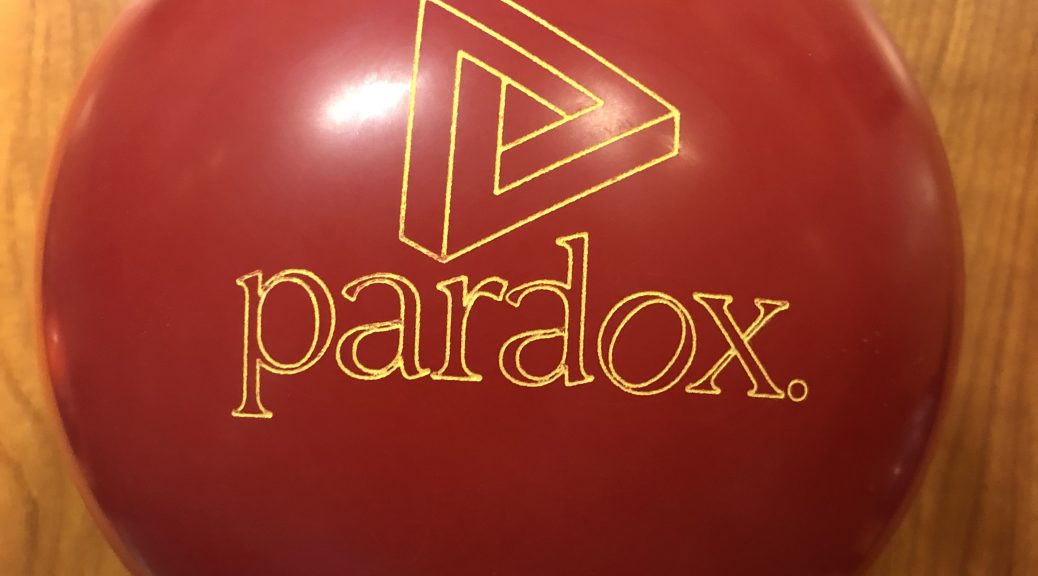 The Paradox Makes Us Red… Thanks to Jeff Smith and Pure It Bowling for drilling our equipment.
Buy the Track Paradox Red at PureItBowling.com.
Thanks to Limerick Bowl in Limerick, PA.

Value
B+
High end ball with a high end price but this ball seems pretty versatile and worth the price of admission.

Overall
THS: B+
Sport: B
Love or hate the solid red, it’s classic. This is the first Paradox to be released with a solid cover. It’s a strong effort from Track to be sure. The obvious is at the center with the i-Core 2.0 returning. The core obviously works for a lot of people. What makes it special is its ability to stand up for every bowler. What I mean is its designed to just get itself into a roll early. This allows it to roll heavy through the pins for lots of bowler styles. My initial impression was confounded but that’s why you go through a battery of testing. I started a bit more direct say 13. Got it out down lane and it looked soft. Got it in downlane and it went high. So I’m confused thinking no way is the ball this weak, it can’t be. I start to move deeper. 15 to 9, strike. 15 to 11, hold in the oil and drive hard for a strike. So now I start opening up my angles and I just keep going. Just keeps looking better and better. It finally gives up when I’m going 23 to 9. In the end, the ball clearly wanted to see some oil. This wouldn’t be the first strong asym that didn’t look good from more direct because it needs oil. What I want to add is that it’s actually very smooth. I’m used to seeing this core take a more defined move but it’s just not the case. Just for context, here is my Ebonite Choice which exemplifies that strong move and you can see how hard it stops and goes downlane. For a more direct Track line comparison, here is the Triton Elite, one of my favorite solid symmetric balls. You will quickly see that it doesn’t quite have the oomph leaving a ring 7. Move left about 5 boards and you see the difference in strength.

James was next. You can see he starts a bit more direct and with the added tilt and rev rate, he carries from out. He continues to migrate in and gets a phenomenal look right around 18 at the arrows. I watched James throw the ball first during testing and the Paradox Red looked impressive. When I initially started throwing it, I felt like my very high track was hindering the ball motion. High track on a ball that likes to stand up. I thought maybe I’m losing reaction. In fact, while some big cores pull my track away from my fingers, this one seemed to pull it towards the fingers. I found my first oil ring hitting my thumb at times so bad reaction makes sense. However, once I moved in and could get just a touch more tilt and less up the back, it looked good. With James’ tilt, he never had the problem I saw at first.

Bryan got lined up quickly and struck a good amount. He saw a smooth arc but good punch down lane which meant good carry for him. Sometimes solid asyms force him in through the fronts but then don’t have enough punch down lane to hit well. No issue with the Red. Now he did feel like the fronts got chewed up pretty quickly and with that, got a couple flat hits. However, he was able to chase in and regain carry whereas many times he feels like once the strong asym pushes him in too deep, they no longer carry. So that was a clear positive for him with the Paradox Red.

Final Thoughts
At the end of the day, all 3 testers enjoyed throwing the Paradox Red. It was clear it wanted some oil. It was also clear that it’s a smooth piece capable of backend for sure but not the snappy stand up we can see from strong asyms. So I actually see some potentially really good use when I want a medium strong step down from my strongest balls but I still want an asym look. Not to compare directly to another brand but this has the feel of an asym Idol for example. So there you have it, the new Track Paradox Red.