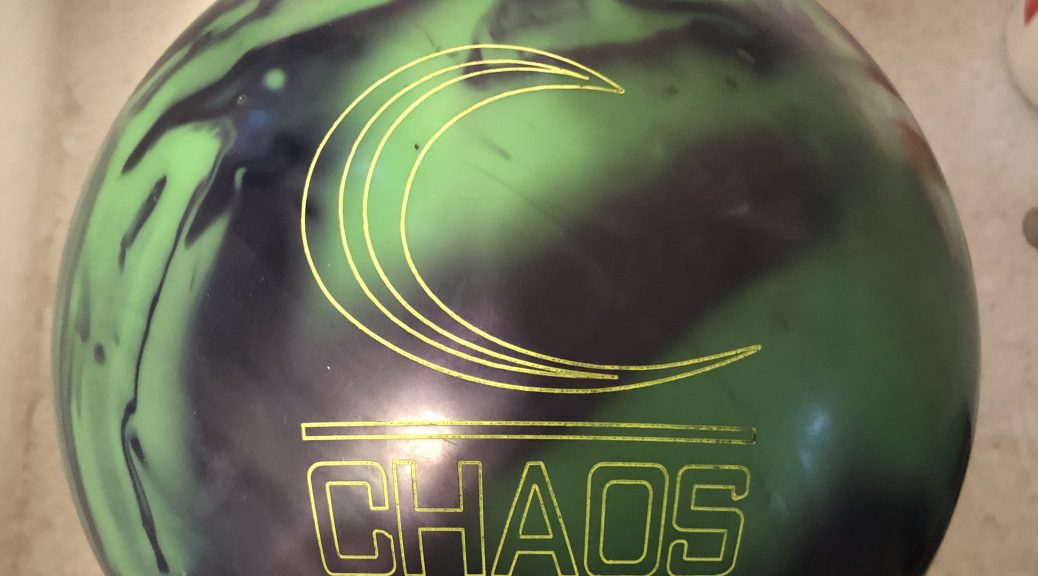 First Impressions
Wasn’t sure what to expect but the Chaos is pretty much a beast. Really strong roll and surprising backend.

Thanks to Jeff Smith and Pure It Bowling for drilling our equipment.
Buy the Columbia 300 Chaos at PureItBowling.com.
Thanks to Limerick Bowl in Limerick, PA.

Value
B+
The Chaos offers good value. It’s a really strong symmetric for the money.

Overall
THS: B
Sport: B
The Chaos moniker is back in the Columbia 300 lineup. This was made popular back in 1999. Technology has moved on but history repeats itself. What I can say is this Chaos really is a strong piece. The hybrid cover finished with 2000 grit along with the low RG core really get this ball started early and turn over hard downlane. Blending the cover and core this way means the ball is definitely going to go. My first ball was through the face and quickly realizing it’s going to be the test ball that covers the most boards in this session. I had to give this ball room for sure. It really read the midlane aggressively and just made a hard turn. I enjoyed throwing it but did feel like I would want a slicker house shot to want to use this. It’s early but not the hook at your feet feeling exactly. It’s a bit later than that which made it feel almost explosive. It’s a bit of a trick of the eye because it’s not skid/flip. Although we didn’t have it on hand to compare, this is a nice compliment to the stronger asymetric Savage. That thing was really strong and if you just want to smooth it out a bit more but still want strong roll, that’s where the Chaos comes in.
For those that have been following us for a while, Brandon is back. As our high rev tester for the Chaos, he saw a strong piece as I did. The ball had the really hard arc reaction with good motion. He also found it strong but readable. He did have to be careful of pinching it in as it will not hold. At the same time, he didn’t want to pitch it out as it wouldn’t make it all the way back. It’s just about too much ball for this house shot which made it a bit more touchy downlane. Brandon liked the motion and a bit more volume would make this a better matchup.
Bryan had a good look with the Chaos. He benefits from the strong cover and strong early revving core to get excellent carry. He tried a few different lines and saw excellent results across the board. He could hug the friction line and take advantage of that shape. He could get parallel everything in and get great hold from there with the high hard one. He could even start it in the friction early and the ball still carried. This amount of ball seemed just right for Bryan on this volume. Whereas a similar ball like the Idol was just a bit too smooth front to back, the Chaos gave him strong punch downlane without quitting.

Sport Shot
We’re testing on the 45ft Dick Weber Pattern. I played the 7 to 6 shot that I like on this pattern and the ball looked right at home. I could also get in to 12 to 7 and I had some room there. Missing to 8 from there and the ball noses up showing how much motion the ball does have.
For Brandon, this is a near perfect match up for him. He’s in the 17 to 7 zone and the Chaos makes mince meat of this pattern. It really looked great for him.
For Bryan the Chaos was a little trickier on the Sport shot. Where it was just the right strength on the house shot, he needs more motor on the 45ft sport shot. The cover is enough and the right amount for control but it forced him in just enough where it exposed the core as not having enough juice downlane.

Final Thoughts
The Chaos is back! The reboots of oldies but goodies is working well for ball companies so why not Columbia 300. There are many other fantastic oldies that C300 could release but let’s start here. The Chaos is that mid-range strong solid sym like Roto’s Idol or Motiv’s Forge. These balls will be very popular because of their versatility and relative affordability. Plus that Chaos name can’t hurt.