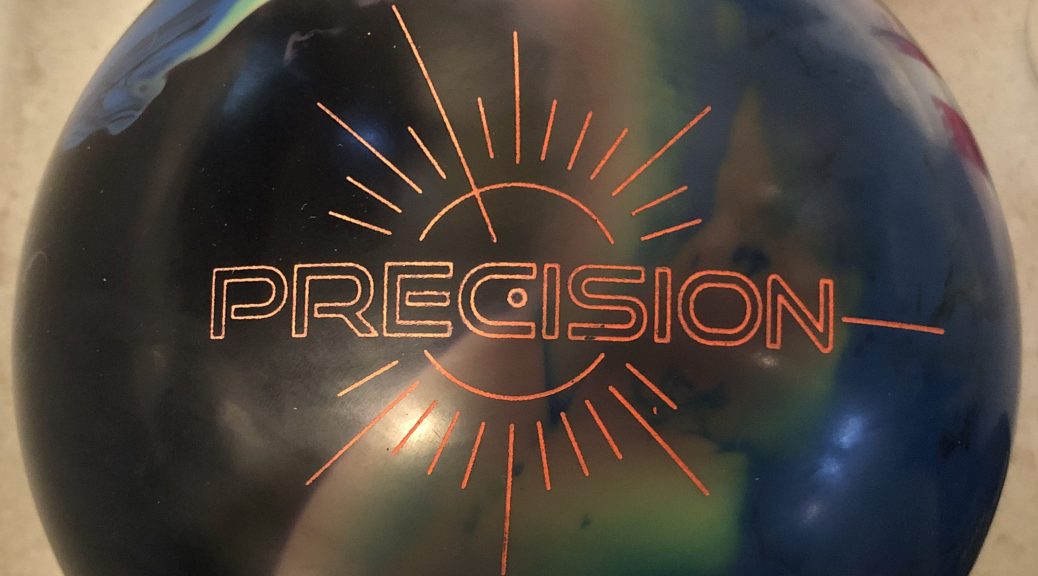 The Precision Gets Stronger.. Thanks to Jeff Smith and Pure It Bowling for drilling our equipment.
Buy the Track Precision Solid at PureItBowling.com.
Thanks to Limerick Bowl in Limerick, PA.

Value
C+
The Precision Solid suffers a bit of that top line value proposition as it’s a solid asym so will not be quite as versatile. It was also initially a bit confusing how it fits with the other top line pieces in Track’s lineup but more on that later.

Overall
THS: B-
Sport: B
The Precision Solid is the follow on the the Pearl Precision. We’ve seen the Prime coverstock, first in the Alias in hybrid form, then the Precision as a pearl and then the Paradox V as a pearl. It’s clear that Track is committed to transitioning their top line to the Prime coverstock line. Track’s going to have to simplify the line up at the top end as now there are 3 hybrids with different covers and cores, 2 pearls, and one solid. But to focus on the Precision Solid, it was a little tricky to settle in with on the house shot. It’s strong but smooth. You want to keep it in the oil and it stores energy better. The core is pretty big and tumbling but it doesn’t make an explosive move. So it is readable. But at the same time, it did feel like it had its limits in both directions on house. I can go through 15 or 16 at the arrows but there was fairly wide variation of downlane motion when the breakpoint was 6, 7, or 8. That’s not particularly unique on this pattern but a bit more pronounced in a way that made it feel like I just didn’t have a lot of room on the house shot. The core gets into a roll fairly quick but either the cover is expending too much energy too early or it has a slower response time to friction. Recalling how aggressive the Alias was down lane, I’m inclined to think this shot simply doesn’t have enough volume for the Precision Solid to shine.

Sean was next and he also saw a nice smooth shape. It wasn’t difficult for Sean to quickly find the pocket. He doesn’t need a lot of ball on this house shot but at the same time, the Precision Solid didn’t feel like it was huge. In fact I would say the Tactix felt like a bigger piece. To be fair, the Tactix has become one of my favorite pieces in a while but a story for another time. Ultimately, you can see a touch of that over/under between corners and 4 pins. It’s good to be in the pocket, but you want the more consistent carry for the big scores. There was just a little too much variation in the way the ball left the deck, varying from deflection to too much drive. However, of all the testers, Sean probably had the easiest time seeing good motion.

I believe Bryan had the best look out of the 3 testers. Bryan can use strong pieces on this house shot and it seemed like the Precision was the right amount of ball for him on the fresh shot. He had pretty solid drive through the pins and he liked the shape it generated. He had good hold in. Out into the friction meant a little too much energy loss.

Sport Shot
We’re testing on the 45ft Dick Weber Pattern. I like to play this shot near 5 straight up or a very small belly until it opens up. I played this one 6 to 5 and it looked pretty good from there. I was a little surprised that it didn’t really give me much forgiveness. So it’s strong but not so strong which meant I was just playing a little too tight a line. I did also try a little deeper line paralleled in and it looked decent from there.
As we’ve now seen, the higher rev bowlers can play this shot close to their house shot line and Sean could do the same as long as the breakpoint didn’t go outside of 8. The Precision Solid looked pretty good for Sean from there. He could theoretically also play a more direct shot.
Bryan had an OK look on the sport shot. He had the same shape overall as he did on house but had more deflection given the pattern length.

Final Thoughts
The Precision Solid offers a different look from the other Track balls. The i-Core from the Paradox has more defined early shape. The Alias had mega backend even. The Precision Solid is strong but smooth. Not overwhelming and that will likely make it usable for different style bowlers. I discussed my thoughts with EBI and the short version is that while the Paradox has been an outstanding piece in the top end, it starts up early and aggressively and some bowlers struggled with that shape. So Track decided to offer something that is smoother and shapes a bit slower allowing those bowlers to have more success. You could ultimately use surface to bring the shape closer to you. That conversation made it crystal clear why they released the Precision line and good on them for offering versatility in the top line.