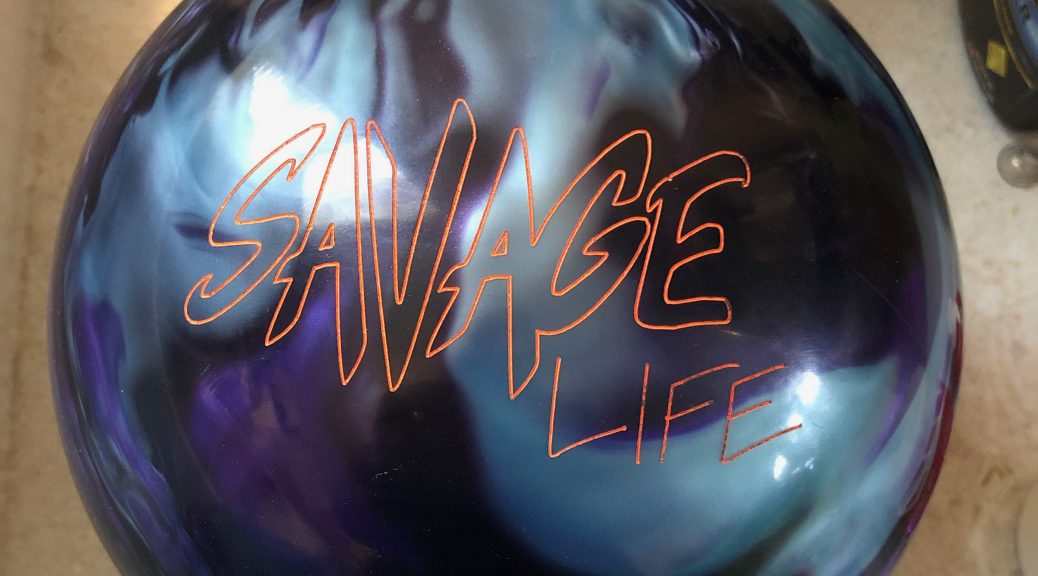 First Impressions
The Savage Life is the real deal. Another winner from Columbia 300.

Thanks to Jeff Smith and Pure It Bowling for drilling our equipment.
Buy the Columbia 300 Savage Life at PureItBowling.com.
Thanks to Limerick Bowl in Limerick, PA.

Value
B+
Pearl asym with really nice motion. You can expect this score almost as standard.

Overall
THS: B+
Sport: B+
Straight away, I feel really good about how this piece rolls. Just as we were impressed with the Statement Pearl, this is close. Big picture, it’s plenty strong enough for a medium house shot with strong downlane motion. This Savage core is pretty aggressive downlane. I don’t quite see it as skid/flip but it is aggressive downlane for sure. So if I were to rank them, Statement Pearl would be the most aggressive off the spot, Savage Life next, and then Ebonite Choice Pearl would be smoothest. For my game, this was a beautiful match. You can see the more direct lines I’m playing on this house pattern that’s playing a bit on the slick side but it gave me no over under there. It was strong enough to come off the spot consistently and that’s to the credit of the aggressive core blending nicely with the cleaner cover. The ball is also responsive enough to move in and finesse. It was interesting comparing to the solid Savage. That ball is also very responsive downlane. On the same line, it still strikes. Cover just slows it down enough to just be a bit earlier read while still being angular. You can also move in with the Savage and it still blends and drives.
Jordan was next and for him, the downlane responsiveness actually made it a bit more tricky for him. With his very low tilt and how aggressive the ball is, he had no hold missing in. He had to open up the angles a bit but not so much. If he opens up and misses out, the ball kind of quits on him because it expends energy in a quick burst at the breakpoint. He ultimately had what I would consider an average look for him. The formula is maybe a bit too responsive and angular to match his game on this pattern. A longer pattern would make more sense. When comparing to the original Savage, you can see the ball is stronger but the blend that made it look really good for me made it over under for him. It’s clearing wanting to dig in but peters out and dies. Too much ball for him on this volume.
With that little excursion, Bryan tests the Savage Life and we’re back to seeing a really good ball reaction. It really stored lots of energy for downlane motion which seems pretty clear intent from Columbia 300. It is strong so he had to move left enough to stay in the pocket with that big backend. The challenge Bryan had was pocket control. He couldn’t miss in at all. Truth is, missing in is a recipe for going through the nose with this ball. The nice thing is it never really felt like the Savage Life wouldn’t hook. For Bryan the Savage was clearly stronger but with very similar and recognizable shape. Yes it’s earlier so looks smoother but they do compliment each other quite nicely.

Sport Shot
We tested on the 39ft Bear pattern. I really liked the shape here as well. I like to use natural projection so a ball that is responsive makes me more comfortable as I know it will come off the spot. As this is not the easiest pattern, I would surely put some surface on it if I wanted to use it on fresh. Otherwise, as it breaks down this would look really good. On the other hand, the Savage was almost too strong to use at all on this sport pattern. It’s very strong and responsive down lane.

For Jordan he again had a good look and forgiveness. It’s still a strong ball but with the added backend of the sport pattern and he had miss room out. He couldn’t really miss in at all with how flippy the Savage Life is. For Bryan, again it’s strong but he takes advantage of the responsiveness to get good motion downlane.

The Idol Pearl was actually stronger here which forced him even further in and wwas more angular which lost some forgiveness. For me, I really liked the smoothness for a pearl. Pearl asyms have been pretty effective for me on sport patterns as they give me reliable motion that still drives. With the Idol Pearl, I also found it appearing stronger and more angular on this pattern as it stored more energy and came off the spot harder. Forgiveness was out with the Idol Pearl vs in with the Halo Pearl. Bryan found the Halo Pearl a bit too angular for the sport pattern. He liked that it shaped strongly but the pattern is too hot downlane so he had some difficulty finding the pocket. For Jordan, the aggressive flip means he just needs to target further out. Hitting anything 7 and in downlane has zero chance to hold. Since he doesn’t like to open up his angles a ton, that is a bit tricky. Control motion would be better for him but for a high rev bowler that likes to open up their angles, this would be a great pearl asym for sport patterns. Bryan can easily take advantage of the strong downlane motion and he saw versatility being able to go up the 1st arrow or get in to 3rd arrow and swing it.

Final Thoughts
Bottom line, I really like the Savage Life. It has a nice spot in the EBI family. There are pearl asyms in every brand but this one differentiates from the others giving you an option. When all is said and done, Columbia 300 has several really good balls in their lineup at the moment and this definitely adds to the list.