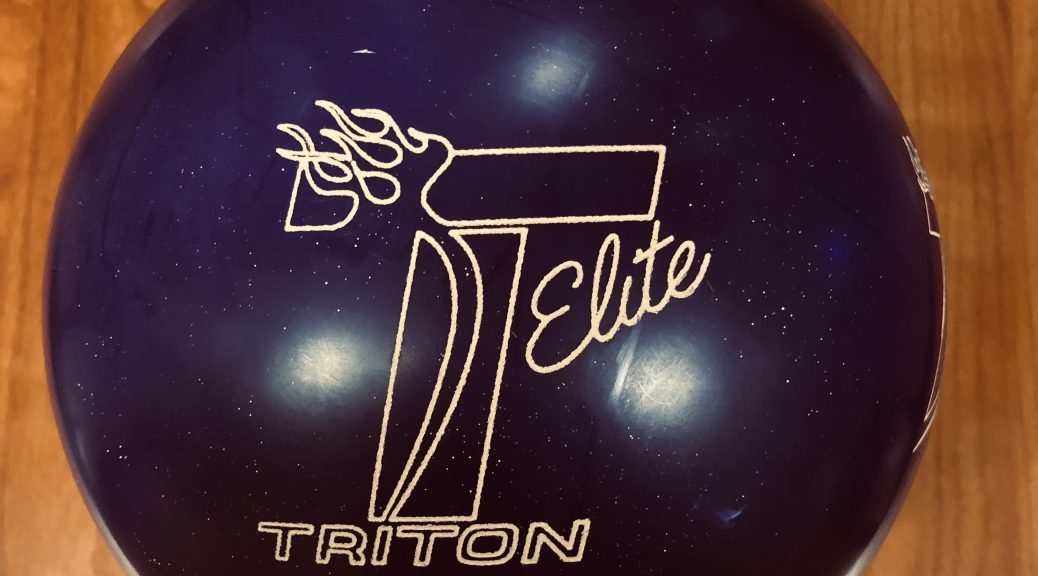 First Impressions
The Elite is back and holy cow I like the motion out of this ball!

Thanks to Jeff Smith and Pure It Bowling for drilling our equipment.
Buy the Track Triton Elite at PureItBowling.com.
Thanks to Limerick Bowl in Limerick, PA. I want to thank Limerick Bowl for their support. If you’re in the area, don’t forget to visit Limerick Bowl.

Value
A
The Triton Elite is reasonably priced and it has a motion a lot of bowlers are going to like.

Overall
THS: B+
Sport: B+
From the first ball thrown, I immediately knew what we had. Despite the finish, the ball doesn’t struggle to get down lane. But the special thing about this ball is the capabilities downlane. It really turns over for a big reliable move. It generates angle and you can trust it will without a doubt. It never said, “no thanks.” The most poignant feeling we had was that it made us feel like there is no out of bounds and if you don’t realize it, this is very high praise.
I could play from near the 3rd arrow with a bit higher speed to rev ratio. I could also easily play the 4th arrow or deeper with a bit higher rev to speed ratio. Bottom line is I could get to the pocket from anywhere. The one thing that blocked me from perfection was the 7 pin. From the 3rd arrow, ball is a bit too strong and I leave some flat 7s. From the 4th arrow, I was wrapping the 7 pin. More than likely, the best solution to get this ball to better match up is to take it up to 4000 to allow me to play the more direct line allowing the ball to store a touch more energy. Nevertheless, I absolutely loved the motion. Quick comparison to the Tactix and they are pretty different pieces. The biggest thing is the pretty clear hook/set motion from the Tactix. Due to how much it digs in, it seems to “stop” more as opposed to the Elite’s continuous motion.

Jordan was next and no surprise he also saw the big ol’ motion out of the Track Triton Elite. Because of how hard it comes off the spot, he had to get in a bit more and did occasionally blow it through the spot trying to almost force it online. You can see misses in don’t hold for him as they just run away. With that said, he saw the same beautiful motion of roundness that just keeps trucking and really continues through the pins. This really looks like a strong benchmark type ball. But for Jordan on typical house, a pearl asym or maybe slightly weaker ball will be easier to benchmark with. Something giving him a clean look but predictable down lane motion. Compared to the Tactix, it follows exactly the same model. The asym has a great look but if you look at it through the pins, you will see the Tactix deflects more at the back of the deck.

On to Bryan, he has a ball that due to the angle it generates, pushes him in to give it more room. So the motion also looked very nice on lane but it made his line a little tight. The ball’s rounded motion lost a little hit for flat or wrap 10s, similar to what I saw. So to compensate for the stronger cover, he amps the speed up a touch to keep the ball holding line. He definitely felt like he could work the ball, maybe add some rotation to float it further downlane. For him, length control was the key. Compared the Tactix, again the biggest difference is the strong hook/set motion of the asym core in the Tactix. So where the Triton deflected for a flat corner, the half-pocket hit with the Tactix carries in a different way. Bryan takes advantage of the stronger core of the Tactix in this case.

Sport Shot
We tested on the 42ft Scorpion pattern. The Triton Elite was a surprise dream for me on this pattern. I really felt like I had no out of bounds. Having bowled this pattern a few times, I found the outside out of bounds so either use a tight line or move in. Well the Elite could do either and outside looked really good from the left side because of the angle through the pins. Next to the Tactix which I use relatively effectively on this pattern, you can again see the hook/set control motion. But with that comes less room for forgiveness out.
For Jordan, the reaction is amplified and this feels like a lot of ball for this pattern. The Triton Elite still has a nice reaction but probably a magnitude too much for Jordan give his rev rate. The hook/set motion of the Tactix was perfect for this condition.
By the time Bryan tests, it’s no longer a surprise that the Triton Elite is almost magical for him. He didn’t have a problem getting length but the big thing is having control of the breakpoint despite the strong move down lane this ball creates. That meant great pocket control. Like me, he felt no out of bounds. Area on a sport shot? Awesome. With the Tactix, he had the same hook set motion out of it. The Elite gave him a better look.

Final Thoughts
If you couldn’t tell the Track Triton Elite really impressed us. It visually looks great. It rolls fantastic. It’s a medium ball that seems to be able to make it’s way up and down the scale if you will. That in my eyes is the definition of a benchmark. If I didn’t say versatility already, yes it’s versatile. It has a backend motion that you can rely on and trust. The feeling of no out of bounds was very noticeable which means it really matched up well. Enjoy this remake folks.