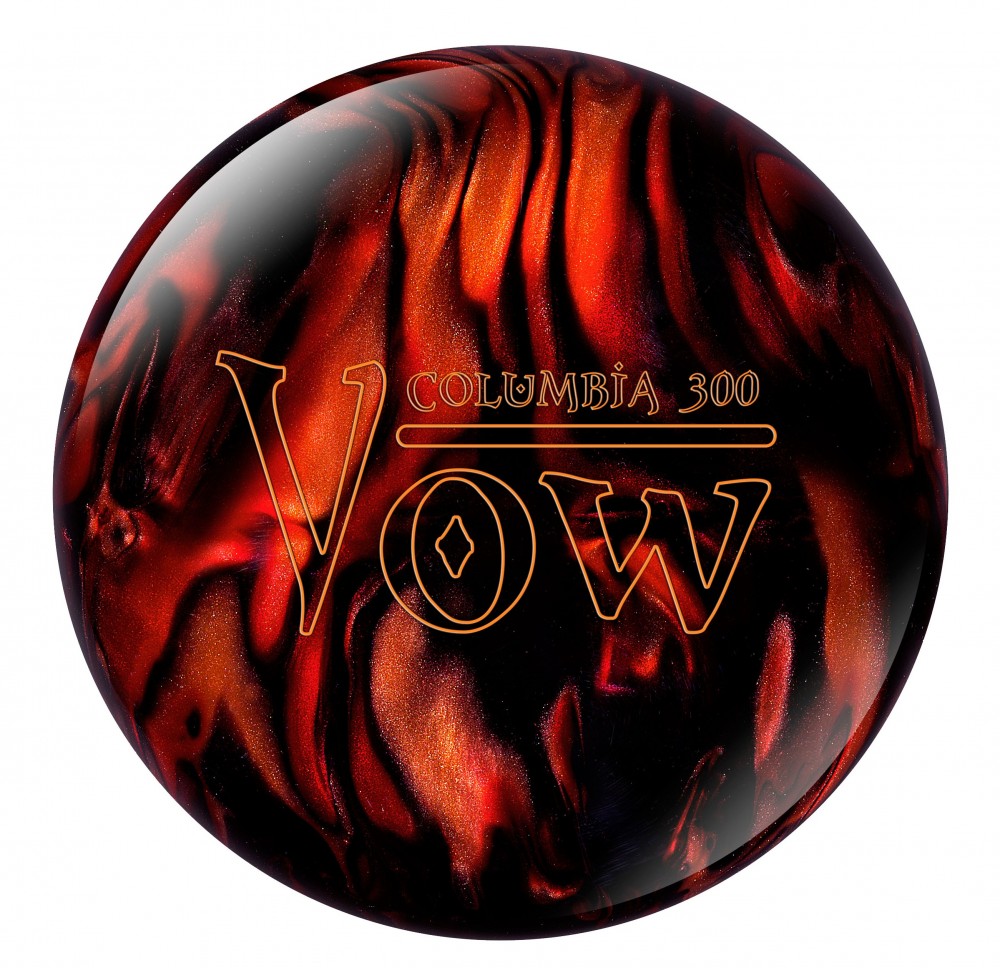 This one Vows to turn the corner We used a pin up layout for the Columbia Vow to compliment the expected ball reaction. The 5 inch pin will offer medium flare for a later breakpoint. It will get into a medium to late roll with a medium transition. Remember that coverstock accounts for 70% of ball reaction, but the core will create the dynamic shape. Your drilling will alter the shape to suit your game and conditions you bowl on. Please work with your local pro shop operator to find what best works for you.

First Impressions
A lot of people are going to like this ball. There’s a good reason it’s going to be a popular ball for Columbia.

Value 8.5/10
The Columbia Vow is in what they call the Upper Mid-Level Performance line. Basically one step down from the top line. It’s not the least expensive ball out there, but from what we saw, it’s going to be worth it for a lot of bowlers.

Core
The Capsule core has an RG of 2.47 and differential of .054 for a 15 pound ball. It really is a simple design. Nothing fancy but it looks like its name. It’s an early revving core which will roll heavy.

Cover 8.5/10
The Columbia Vow has a pearl cover called Bend-It Pearl. The factory finish is 800 abranet, then 1000 and 2000 abralon. Finally they added the Powerhouse Factory Finish. We don’t know the details of the pearl content but it allows this ball to go long and strong. It reacts quickly to dry boards.

Simply put, Larry had an outstanding look on our house shot, a modified Stone Street. The Vow had good length and a strong reaction when it hits dry boards. When combining the early revving core with this shiny pearl cover, it seems to create a perfect match that allows the ball to turn over with lots of continuation. Every ball just cut through the 1-3 and almost always split the 8-9. It worked quite well on this fresh house shot.
When compared to the Oath, it pushed about 1.5 ft further before making its turn. Watching the overlay on the video is a little deceptive. These 2 pieces are quite close on the house shot with the Oath being a touch stronger and earlier. Larry got 5.4 degrees of entry angle with the Vow as compared to 5.9 with the Oath. I think the earlier read made the Oath just slightly more continuous. However, overall, the Vow offered the perfect look, balancing a strong ball reaction with forgiveness and punch.

The look was a little different on the sport shot. Now, the clean cover pushes a little too long on this heavier volume pattern. The Vow was a little more finicky. Athens plays true… and tough on the test pair. While Larry had no issues getting to the pocket, carry percentage suffered a bit with varying entry into the pocket. Sometimes the ball would push a bit and hit soft, other times, it would push but come in hard behind the head pin, leaving a ringer. These were all symptoms of the cover being too clean for our tester. However, again, Larry had no issues getting to the pocket. In this case, the Oath came in handy. The entry angle was about equal at 5.6, but the slightly earlier read allowed Larry to point the ball a bit more and increase carry percentage.

Overall 8.5/10
We’re back to where we started from. We really liked the look on the lanes for the Columbia 300 Vow. This ball is likely to match up for a lot of bowlers on the typical house shots and volumes we face. The ball offers easy length and a nice reaction off the dry. The early revving core will give the Vow that strong continuous roll. For sport shots, out of box would likely be perfect for when the medium volume patterns have broken down a bit. You could also take the polish off and get a smoother roll. However, given how nice this ball is with the factory finish, just get an Oath to compliment it.