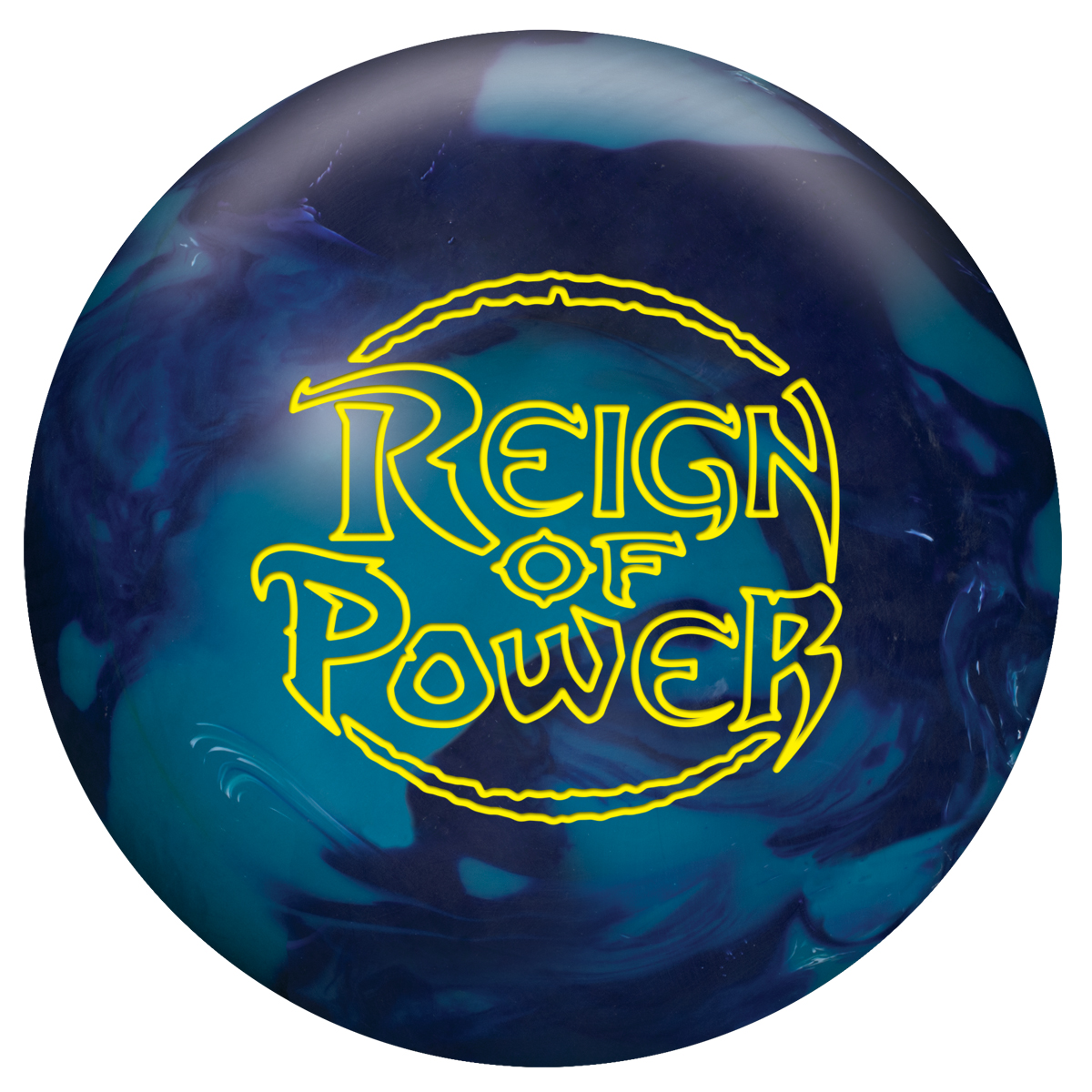 Will this one Reign? We used a pin up layout for the Storm Reign of Power, knowing how aggressive it is out of box. For Eric (Stroker) and Norm (Power Tweener), their layouts will offer medium track flare for a later breakpoint and a moderate transition. For Jeff (Tweener), this layout will give him higher track flare, with earlier roll and quick transition.
Remember that coverstock accounts for 70% of ball reaction, but the core will create the dynamic shape. Your drilling will alter the shape to suit your game and conditions you bowl on. Please work with your local pro shop operator to find what best works for you.

Value 8/10
The Reign of Power is in the Thunder Line with the “Road”s and is moderately priced. We’ve seen this core before in a similarly aggressive finish in the Reign of Fire. The saying goes, “if it ain’t broke…”

Core
The CAM core is reused once more. Storm has maintained the “Reign” name for this core. A 15 pound piece has a longish RG of 2.57 and a medium differential of .048. This core stores some energy, allowing to go long and strong. Of course, depending on what cover you put it in, you’ll get variations of that reaction.

Cover 7.5/10
The Storm Reign of Power uses the newer PFT™ – Progressive Friction Technology Solid Reactive cover. This is the same cover used in the IQ. This is a very aggressive cover with a very thick shell. It’s finished at 1000 grit which adds to that aggression. I don’t think you’ll ever see a ball flip with this cover as it just has too much teeth. But there are definitely positives in having a controlled ball motion, especially on tougher patterns.

Stroker. Eric definitely had the hardest time finding a happy place for the aggressive Reign of Power on this house shot.  The 1000 grit finish had this ball quitting too early on him, but was too strong to square up.  The closest he got was playing about 10 to 7 as you can see on the Digitrax, with 5.8 degrees of entry angle.  The ball rolls and then punches.  From the right part of the lane, you can see what it has to offer.  With this gritty finish, you need room, but if you got too far in, the ball just will not make the corner.  For Eric, it just made it too hard to play on this house shot.  The immediate thought was to raise the grit to get a much better look.  We didn’t get a chance to do that for this test.

Tweener. You’ll notice that Jeff actually plays a bot more direct than Eric.  That’s because he has more speed and more tilt which allows the ball to push further down lane typically.  In addition, the ball is drilled for an earlier roll and quicker transition for Jeff.  It took a little bit to find that place where you can play direct enough.  While Jeff had a better look than Eric,  he still had to be careful not to be so direct that the ball hooked up so aggressively, and at the same time not get too deep where the ball just can’t make the corner.  However, because this small belly shot is right up his alley, it didn’t take too long to find it.  Again, it would likely be nice to have less surface on a house shot where the backends are not quite as crisp and the surface of the ball is reading so early.  Jeff saw 5.6 degrees of entry angle with this line.

Power Tweener. Norm was a completely different story.  Norm smashed the hole on the first shot and just kept going.  It was aggressive enough to control the midlane very well and with the higher revs and side rotation, the ball didn’t quit on the backend.  The Reign of Power just seemed to have the perfect length, midlane control, and punch on the backend to be a great choice for Norm, particularly on the fresh shot.  Norm saw 6.2 degrees of entry angle and had the room the other two bowlers did not.  The drilling with this surface, core, and his specs just seemed to be perfectly matched.

Stroker This was a tale of two balls for Eric.  It went from a very difficult shot on THS to an amazing look on the sport shot.  The lane we shoot on plays pretty tough with the Athens pattern.  However, this ball just said, “what’s so hard about this?”  It gave a fantastic midlane read with great punch on the backend.  In fact, the tale of the tape says Eric now saw the highest entry angle of our testers at 6.3 degrees.  The ball just read so nicely and just trucked through the pins with great continuation.  Of course when the balls gives you that reaction, you get more comfortable.

Tweener Jeff had a decent look on the sport shot.  He again was lined up more direct than anybody else.  He also saw the lowest entry angle at 5 degrees, despite the cleaner backends of the house shot.  Likely if this ball was laid out for a slower transition for him, he may have seen a better ball reaction.  It just wasn’t punchy enough if he moved in and was too much if he pointed it.  So he found the line which carried best.  It just wasn’t the greatest look he’s had.

Power Tweener Norm continued to have a good look with the Reign of Power on the sport shot.  The ball gave him that nice midlane control with strong backends.  What made it a little tougher is that the crisper backends on this pattern and the already punchy reaction meant he had to be more accurate.  Well, that’s not all that surprising for a sport shot.  He saw 6 degrees of entry angle.

Overall 8/10
The Reign of Power is one aggressive bowling ball. At 1000 grit, it’s not going to be ideal for many bowlers on typically medium or light house shots. However, it may help some get a great look in the first game when the pattern is fresh. Otherwise, you could take the grit up and take advantage of a core that naturally wants to push and give you some punch on the backends. For those that bowl on tougher patterns, you will almost certainly see more use for a ball with such a rough surface to smooth that reaction out. It helped our bowlers see some miss room which is a great thing to have on sport shots.