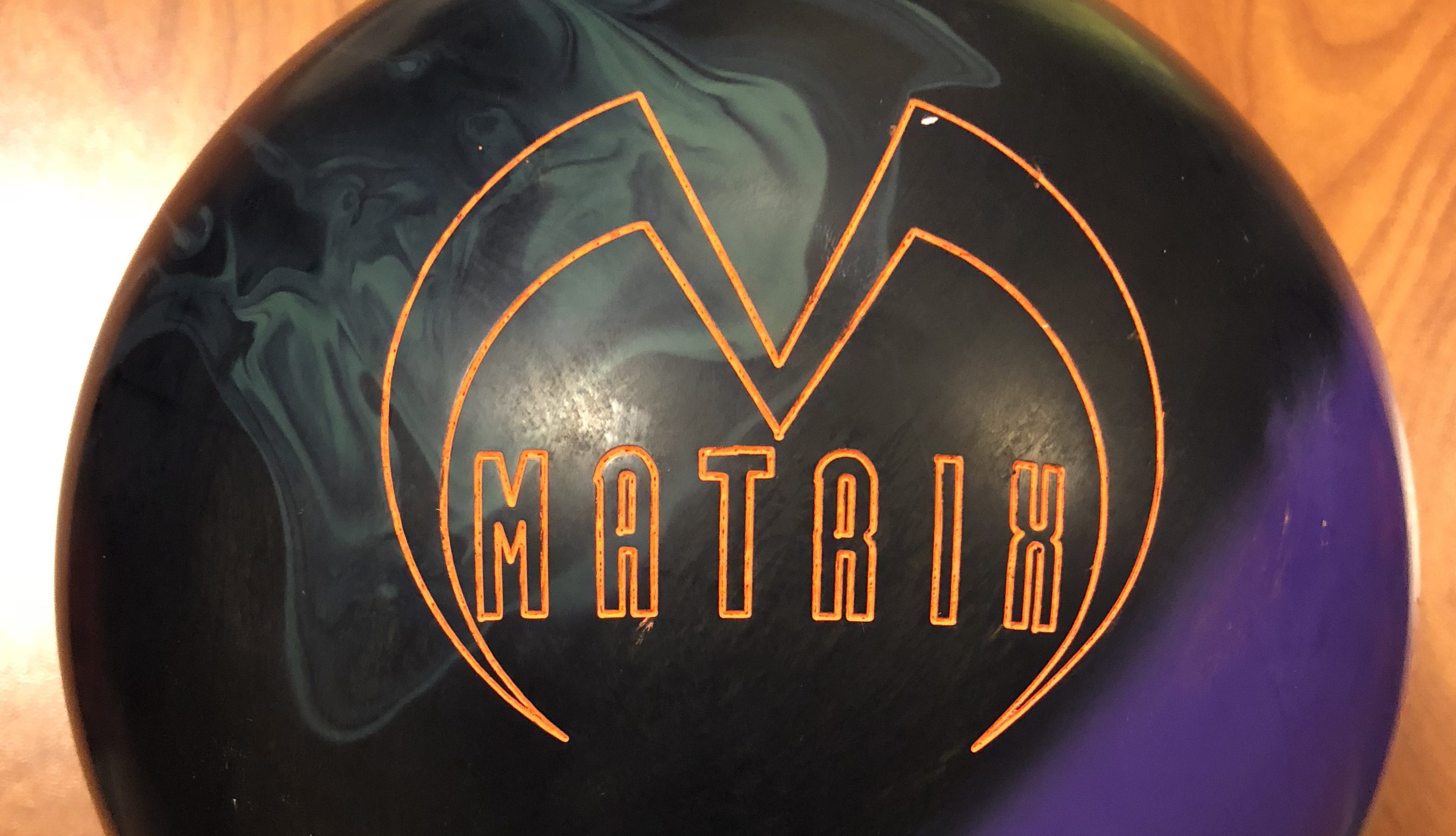 First Impressions
The Matrix Solid is colorful, strong but still punchy. Me likey…

Value
B+
The Ebonite Matrix Solid is a mid-priced ball with a strong overall motion. Combine what it can do with the cost and you get could bang for the buck.

Overall
THS: B+
Sport: B+
The first few balls pretty quickly set the expectation for what this ball is about. I opened the box and saw those bright colors. I am not a fan of such color schemes generally speaking but this one didn’t bother me going down the lane. It actually was designed in a way I can see the roll nicely. Anyway, it’s a dull cover out of box and we know the core. With the aggressive cover, it wants to start up but wasn’t too hard to get downlane. The core has a medium RG so the core wants to get downlane but it has a tumble and then strong move at the back. The core has an interesting transition. This core shape tends to have a nice balanced transition but the added flip-block makes it more aggressive at the backend. I didn’t have too much trouble getting this ball downlane and it’s partly due to the fact that the reliable backend move gave me confidence that it was going to come back. Therefore I didn’t have to try to “push it” or get in and “hit it” to make it come back.
We had a chance to compare it to the Ebonite GB3. The GB3 has that buttery smooth roll with great rounded boomy continuation it’s always been known for. It’s a bit longer than the Matrix Solid but the core looks very smooth and rolly but still strong overall movement. Even thought on the house shot they cover similar boards, they are very different in the way they do it.

Sean was next. He saw a lot of movement from the Matrix Solid. Here’s where having a mildly asymmetric core in an aggressive cover makes the ball quite continuous rather than the snow tire hook/set look of a super strong asym. He had to get pretty deep, between 4th and 5th arrow and throw it out almost anywhere. He didn’t want to miss in because the ball is too strong and would hook up early. But at the breakpoint, he could go 7 to 4. The ball didn’t seem to die into the friction, even with that much board coverage. While it may not show, in his mind, he felt like he had to try to “push” it down lane due to it’s aggressive cover. He wouldn’t go for so much cover generally and especially on typical house shots. He also compared to the GB3. In his case, the rounded continuous shape of the GB3 made it almost an arrow more ball. It store a bit more energy and just keeps coming back. He fell in love with the GB3 at first sight but that’s for another video…

Bryan was next with the Matrix Solid and he had a pretty good look. He got the benefit of a strong midlaney reaction that drove nicely through the pins. It kind of had that aggressive big piece look. By contrast to Sean, he was not able to get lots of bounce off the dry. The ball just seemed to lose energy for him and just run out of steam if he got out too far to the friction. Compared to the GB3, again he saw that rounded boomy move and he could get deeper with it with really good drive through the pins.

Finally Dave. He’s a stroker but with less axis tilt than Bryan. Does it make a difference? Yes and No. Basically he sees more defined and aggressive transition visually whereas Bryan gets the deceptively smoother transition. However, they were in the same zone more or less with this ball. Not hugely different when it comes to the way the ball reacted off the dry. To the outside dry, the balls loses some energy but Dave got a touch stronger reaction back so leaves a 2 pin instead of a bucket. All in all, pretty similar. Comparing to the GB3, the 2 balls weren’t hugely different. Similar board coverage with a slightly different shape.

Sport Shot
We tested on the 47 ft PBA Scorpion. This pattern is long and plays long. If broken down correctly, there’s a nice slot built up for righties. For me, I tested on fresh and after a couple of games. Didn’t make much of a difference. The Ebonite Matrix Solid shapes up really nicely for me. Whereas some big pieces can have a bit of a hook set motion or big syms have some over/under with continuation, the Matrix Solid matched up really nicely for me. I typically use big asyms with lots of surface but this ball looked fantastic out of box. Just look at the way the ball comes off the spot through the pins.
Sean tested after about 6 games worth of play and he just doesn’t need this much ball at this stage. This is just after a good shim has been created. He can get it there but is happier with a medium semi-shiny symmetric at this point. But when he gets the ball to the right spot, it sets just right to go through the pins nicely. Bryan tested with the same amount of play and you can see he still needs something a bit stronger to get a consistent look. A big asym with even more surface is still called for.

Final Thoughts
Interestingly, the Matrix Solid reminds me a lot of the Roto Grip Show Off. It’s almost the same color scheme. It’s really strong. It’s got the flip downlane. Core numbers are really close. I don’t know if this was intentional but Ebonite would be in their right mind to go after a winning formula. And the Ebonite Matrix Solid doesn’t disappoint.