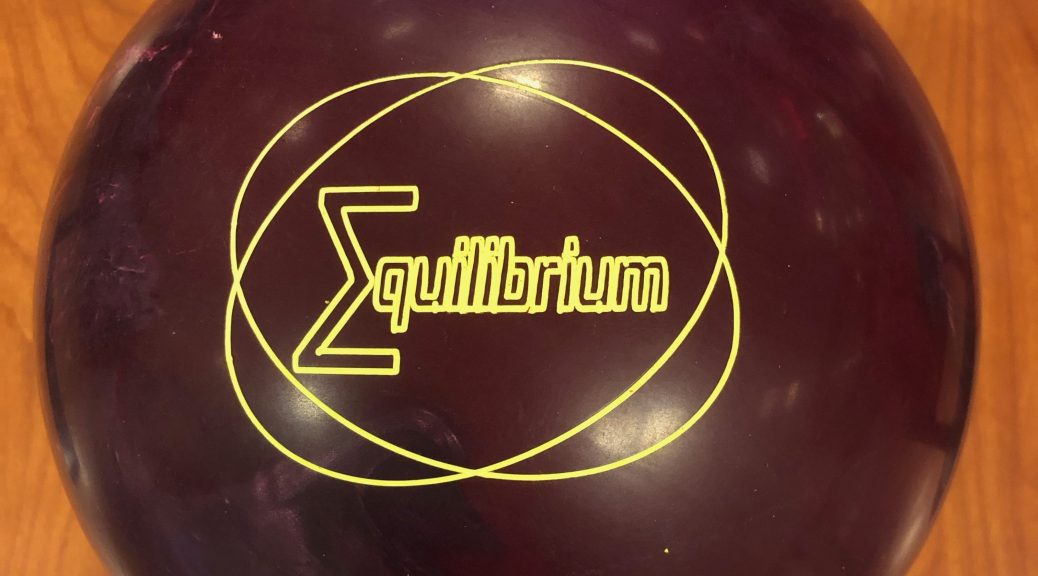 First Impressions
The Equilibrium is properly named, being one of the more versatile balls we’ve thrown in recent times.

Value
A
Very versatile for a medium priced ball.

Overall
First off, I have to admit the 900 Global Equilibrium was very fun to throw and hopefully you will be able to see why. This is a smack dab middle of the road ball. Cover is moderate strength with a moderate finish. The core is medium strength with that simple domed shape and a medium differential. I’ve found historically medium differential balls tend to be some of the most versatile pieces and this was for sure. This combination has some smoothness with some midlane read and a downlane shape that seems to accelerate as it gets closer to the pins. It’s a shape I’ve called “boomy”. The real stand out characteristic is that it seems to have the uncanny ability to be playable from a wide range of areas of the lane. Typically I may have say 5 boards to manipulate a ball to get to the pocket. I’m not talking about 5 boards at the breakpoint but at the arrows. With this ball, I literally had 20 boards. It does have a bit too much angle from more direct so unless you can control your rotation, it will be tricky. But since I have a little more rotation, once I start pushing 2nd arrow and beyond, I have no problem. I just keep working my way in all the way through about 5th arrow and then no more area check was necessary. Yes you have to move your breakpoint and so on but the point is the ball was versatile enough to allow me to play all those different angles. I’m a medium rev lefty so having this much ability to manipulate the house shot is frankly fun.

You could argue this is a benchmark ball. Just one shot with say the Phaze 2 which is probably the ultimate benchmark shows that this is basically just a step under meaning a little less midlane, so a little later and a touch more angular. So perfect stepdown in my mind if your looking for a slightly cleaner reaction.

Sean was next and again you can see the same motion. His benchmark is his HyRoad. Basically, this would be a little earlier and a little less angular. So essentially a step up. So imagine an arsenal where you have a Phaze II, an Equilibrium, and a Hyroad. You can cover tons of conditions with those pieces. And I shall say the fact that I’m mentioning the Equilibrium in the same breath as these other venerable pieces should give you an indication of how I feel about it. On the condition Sean is on, you can see the ball is usable. He likes a cleaner reaction still of say a Hyroad but you can see a clear demonstration of how this ball shapes. Sean hadn’t seen me test the ball at all but also tested different parts of the lane and he saw the same usability.

Bryan was next and he also had more room than he typically has. He had been testing the Badger Extremes as well and had to recognize that the Equilibrium is more ball and requires more angle. So he had to open up his angles or the ball will not hold. So a little belly is needed. Here’s where different styles take to different pieces. Bryan is an accuracy bowler. The Badgers while being less ball allowed him to focus on pretty direct lines and really repeat his shots. With having to open up the angles a bit, he had to reset his mind to angle. It may have been a little tricky at first but he found it and got comfortable. But ultimately, I believe he would choose a less angular motion as long as it still gave him drive. This was definitely a different look and I think it was nice to have that play.

Sport Shot
We are testing on the 43ft Kegel Krypton Pattern. Again, this ball shows off it’s versatility. The theoretical pattern exit using the PL-31 is the 12 board. Of course, if you’re more direct, you’ll be outside of that. As you look for alternative lines to the pocket, you have to find that matching target and breakpoint to effectively carry. Just like on the house shot, I could use several different lines. The ball wasn’t confined to a specific trajectory like say the Volatility is. I’m direct straight up 10, no problem. Chase in towards the 3rd arrow to around 10 at the breakpoint, no problem. As I finally get to close to the 4th arrow, it starts to get a little tough for me. 10 boards at the arrows is a ton of room to have a good line. So I could find the launch angle I’m most comfortable with and go. Just to give you a comparison to a benchmark ball like the Storm Pro Motion, you see the ball look really good 15 to 10. The same ball from the Equilibrium is a touch clean and deflects but still carries. So like I said, it’s a step down from the Phaze II or ProMotion.

For Bryan, it’s the same story as we’ve discussed. The balls rounded motion which is a little cleaner than say a Phaze II makes it a nice medium benchmark when the pattern opens up a bit. The ball is smooth and seems to give some room downlane. So small misses out will still turn the corner to at least catch the headpin. Misses in are less likely to hold with this shape but you need to be fairly accurate on sport shots; you won’t get the world.

Final Thoughts
The Equilibrium really feels like a very usable strongish benchmark type ball. It’s strong enough to play medium medium/high volume patterns but also versatile enough to use from different parts of the lane. Everyone saw similar characteristics so the ball was consistent from bowler to bowler at least in our test. This is a really fine offering from 900 Global.