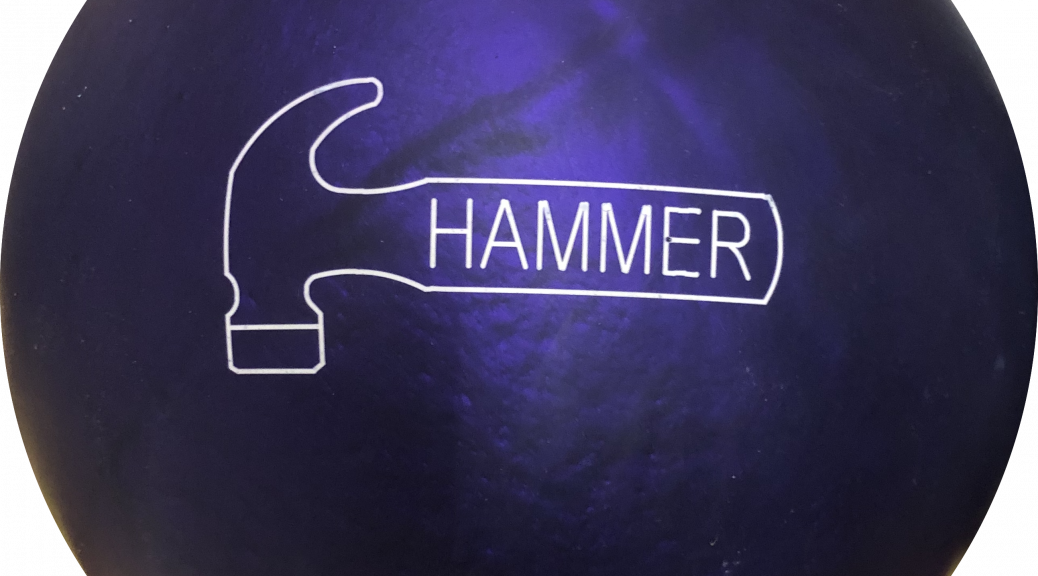 Overall
Is it weird that we took this long to test this ball? Perhaps. This is a situation where firstly the ball’s been around for a while and secondly since I don’t personally throw urethane often anymore, I don’t go out of my way to buy these balls for reviews. There was also a time where the EBI balls were discontinued and the cost on the open market was ridiculous. I know there’s been and continues to be demand for the Purple Hammer. What I can not personally do is give you context to how this Brunswick version compares to the original Hammer EBI version. But I guess at this point, it doesn’t really matter since this is what’s available.

What I see right away is the Purple Hammer is the more direct type shape. Like any urethane ball for the most part, you want to waste as little energy on side to side motion to allow it to hit down lane and carry. In a way, it’s easier to talk about this ball relative to other urethane balls. The pearl in the urethane definitely adds a touch of push as compared to a solid urethane. It will be clearer when we do the shootout video. While this is a urethane ball that you expect to read early, it still needs friction to respond. I was able to get to the pocket going up 7-8. A little further left and there’s too much friction too early. Urethane still reads relatively early. This is a typical urethane in that it’s pretty easy to break reaction. What I mean is on a cliffed shot, as soon as you move the ball to the high volume side of the cliff, the balls go 60 feet. But what I really liked is playing the direct shot, I had the light shot, the high flush as well as the frozen rope shot working. You can ask this ball to move downlane but definitely have to manipulate via speed and axis rotation more so than you would with reactice. Otherwise, you will get deflection. In a way, I was a little surprised I could get into the 3rd arrow and make it work without tremendous difficulty, again slowing it down.

2-Handed Style
As you would expect, the purple hammer is a great ball for my 2-handed game. Since I’m crossing lots of volume, getting it down lane isn’t extremely difficult but the smooth motion and response downlane really gives me great control and a wide open pocket. I can wheel it way out to the friction and get it to come back but with urethane control vs the uncontrollable hard reactive resin response.  The thing I did notice is the reaction softened substantially as the test progressed. To the point that I moved 5 boards left to find the pocket again. But what was fun was to be able to play way more direct as a 2-hander and not have to be on the PBA badger pattern to do it. The good thing is I got the reaction back. It wasn’t like I moved left and urethane puked like it can do since you are draining more energy with more friction. Typically you don’t want to go straighter once you’ve opened up. But the shot was gone and I had no choice.  But it looked quite good.

I would say the bottom line is I can see why urethane lovers like this ball. It is on the “lesser” side of urethane strength while remaining relatively versatile. Lesser, meaning it offers a slightly cleaner longer look than your solid urethane shape. That change is enough to allow a bit more stored energy. Because it does have limited flare, it does affect the pattern as you throw it. There is no denying that. We saw it after about 2 games, I had to move back left to pick up earlier friction to get to the pocket. But because of the cleaner look, I was able to get it to drive.

Urethane Shootout
Hopefully you saw our complete review of the Purple Hammer on its own as well as the Roto Grip Rubicon UC3 and the Motiv Purple Tank by now. If not, check them out. But let’s jump into why we are here, to compare a few important balls for their respective brands in the “urethane” space.

I start right away from the more direct trajectory. Right away, without any further evaluation, this shows you the Purple Hammer is the weakest ball of the 3. From 7-8, the Purple Hammer strikes but on the light swisher side. The Rubicon UC3 had no chance to hold. The Purple Tank also went high but closer to pocket than the UC3.

So I move 3 more boards, so no 9-12 through the fronts. With the Purple Hammer, I’m in the pocket for 4 shots but all different entries. Flat, high, swisher, etc. So it just felt like it was going to like a little more direct shots. I am trying a couple of different breakpoints intentionally but it was a little in between in a way. Next I move to the Rubicon and I do the same. Early friction is half pocket, In the track, it’s high. Move the breakpoint a touch in and it’s strong enough to drive. Then the Motiv Purple Tank. It looked like it was at home here. So basically I felt like the Purple Hammer wasn’t quite strong enough to deal with bumping the edge of the friction. The UC3 felt a bit too strong so had to be manipulated a different way to hold. The smoothness and strength of the Purple Tank meant this was the right zone for this ball.

I move another 3 boards to check out the next zone. While I was starting to think the Purple Hammer is fairly weak, it didn’t have an issue responding from the 13-14 zone at the arrows. The shape to the pocket looked good. If I got it to the friction a little too early it overhooked so it’s not as weak as I was initially thinking. Onto the Rubicon UC3 and the Roto Grip balls looks big here. This zone allows the core to shine. It really gets a little more length but the core turns over harder. Almost doesn’t look urethane and clearly starting to noticeably separate. The Purple Tank looked smooth and probably most noticeably urethane like due to the solid cover and smooth motion downlane. Not weak, just smooth.

So at this point, I go back to the Purple Hammer and back left to see how the lanes are transitioning. Around 10 felt a little light so I moved a little further left. Frozen rope, fun to crush the pocket on that. Think it doesn’t tell you anything but it definitely does. A really good shot leaves a 6 pin. Now I try to push it into the friction and you can see the shot has softened up. So I shimmed everything parallel to the right and there a shot reappeared. I move around a bit but a nice shot had developed with the breakpoint further in. I no longer wanted to use that outside friction because it was gone anyway. On to the UC3 and in the same area, the pocket looks wide open but left 2 out of 3 7 pins. It just felt like the UC3 is a good amount of ball but it’s like the other “urethane” ball had softened the shot a bit too much. Now on to the Motiv Purple Tank and even while it looks like it’s still reading the fronts, it really couldn’t drive at all. The shot was messed up now and the Purple Tank simply doesn’t have the right balance in terms early read to backend movement. One last shot with the Purple Tank shows that it offers a better balance and can deal with the affects it has on the pattern a bit better than you would think.

A 2-Handed Perspective Perspective
Alright let’s have a look at the mega comparison (Purple Hammer vs Roto Grip Rubicon UC3 vs Motive Purple Tank) with my 2-handed game. Starting with the Purple Hammer, if you’ve seen my primary review you know I felt it is a great ball for a 2-hander. I can play around just left of the 4th arrow as opposed to the 5th arrow with reactive. Now this test was a continuation right after the 1-handed test. The shot looked good for a bit and then it looked bad. I tried to use a breakpoint further in and I was shocked to see it had no chance to recover. I had to move 5 boards with my feet left to find the pocket. The shot has just softened up. The Rubicon UC3 on the other hand didn’t seem to suffer from the same problem. It looked fine. I could actually get a little deeper and not have a problem making the turn and here there is a clear advantage of having a big core so there’s a bit less reliance on the cover. The Purple Tank because of its earlier read didn’t have as much trouble dealing with the carrydown. Back to the Purple and 4 or so boards back to the left. Like I saw with 1-handed, moving left allowed me to recover hit as opposed to just too early of a read. This tug here was special…

From a 2-handed perspective, the 3 balls clearly offer different reactions. While the Purple Tank is easy to get to the pocket, it’s probably the one I’d least want to throw just because of my rev dominance where the earlier read sometimes means flatter hits with the board coverage. Clearly the Purple Hammer and Rubicon UC3 were absolute joys to throw 2 handed but did the business a little differently.

The tie is due to intended use. The Rubicon UC3 is a sort of sweet spot of reactive like urethane that finally gives me the best of both worlds. The Purple Hammer is a cleaner more traditional urethane reaction that is controllable but still hits and doesn’t make me open up my angles nearly as much as other balls.