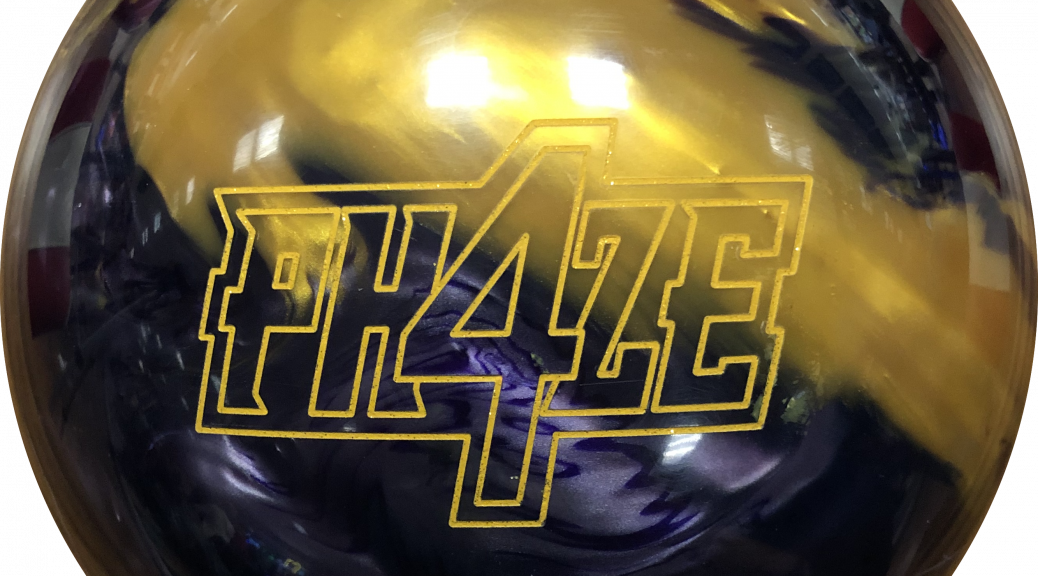 First Impressions
A Phaze with R2S stateside finally, this is probably what many wished the original was. Time to see if it differentiates itself from the other stuff in the catalog.

Overall
I take the Phaze 4 out of the box and I think, I have this ball already don’t I? This question will take multiple shapes here. Firstly, I realized it’s the identical pour to the international Dual Lock which I tested last year. Secondly, how will it distinguish itself from the Phaze III or the Spectre we just tested. So the normal battery of tests takes place and the video is almost self-explanatory that despite me normally hating the 1500 grit polish factory finish, I pretty much struck on every ball. No edits here, except 1 or 2 completely shanked shots which are about the bowler, not the ball.

The formula is relatively simple, the venerable R2S pearl cover surrounding the big Velocity core. You might think that could turn it into huge skid flip but not exactly. Yes it’s long. Yes it turns over down lane. However, somehow the tumbliness of the core helps smooth out the transition that could otherwise appear very snappy. It is still strong downlane but I never felt over/under type weirdness. The thing I will say is almost exclusively, anytime R2S pearl is on any core, for me, that ball is instantly down in the mid late category. Yes there are mild variations but it doesn’t matter. From the Hyroad pearl to the Astrophysix to the Phaze 4. Yes they are all different in some way but the length and limited cover bite in oil means it’s well down in the arsenal, meaning mid late. That’s actually not a bad thing as for a bowler with my medium rev rate, having a longish cover surrounding a big core means I get to take advantage of the big core hit down towards the lower end of my arsenal. Throughout the video I gradually moved 1 board at a time in and I had hit just about everywhere. The ball was continuous and heavy rolling through the pins. Of course as I approach my 2-hand territory on the lanes, my medium rev rate means the ball no longer has the drive. But that’s a huge amount of room. The Phaze 4 worked extremely well for me.

I’m going to do a more complete comparison to the Spectre but you can clearly see the Spectre with that smoother boomier shape. It has a more rounded big move whereas you can see the Phaze 4 is a little later. Maybe a little snappier.

A Two Handers View
On to my 2-handed game. If you’ve watched my videos, you’ll not my style is a rev-dominant 2-hander which means my rev rate is higher than my speed. So naturally the ball will have a lot of movement. I’m still learning to control axis rotation more with 2-hands but ultimately most 2-handers have to be quite deep so where I am on the lane isn’t too surprising. What was surprising was that I actually started a little too deep. Once I moved 4-5 boards with my feet left, there was the high flush shots. So rather than right of the 4th arrow, I was now a touch left of it. It really wasn’t too difficult to test this ball 2-handed at all. It was very long initially when I was a bit deeper and that was clear. I was a little concerned to move left as usually I just get the over part of the reaction but nope, not at all.

Final Thoughts
The Storm Phaze 4 is a real deal good ball. I’m resigned to any ball with R2S cover being down the arsenal for me, but with the big core, the ball honestly worked fantastically on the house shot for me. None of the over/under that can plague me with weaker core/cover combinations.

If I go back to scores. This felt like an A on house shot For value, I’m torn a bit. Maybe B. Reason one, it’s expensive to be that far down in the arsenal. Reason two, it does compete with the Spectre and maybe several other balls down in the back part of my bag. Yes they are different but the question is are they different enough. Stay tuned for the comparisons

A Stroker’s Perspective
It’s Bryan’s turn with the Storm Phaze 4. He has a Phaze III in his bag currently so it was going to be interesting to get his perspective on the big Velocity core in the R2S as opposed to the R3S coverstock. Our pattern here at Limerick Bowlero is pretty representative of many house shots out there with the walled shape, very dry to the outside, pretty wet down the middle. So you kind of know that you won’t be able to start up such a clean responsive cover immediately into the friction, but you do need downlane friction to get response. Just as expected, too close to the friction does’t work due to over/under but as soon as he moved a few boards left and pushed the ball to the friction, the ball comes into its own. There, he had a very nice shape overall. It is long and kind of backendy if you will. Of course, with that type of reaction and this clean and weak a cover, misses in to the oil float and don’t do much. But it didn’t go crazy from outside so wasn’t over/under. Now as the lane transitioned, over/under did come into play. In other words, it started hooking too much and then pushing in a little still did nothing. 2 and 1 wasn’t enough to get out of that zone but another 2 and 1 and he was back in business. As you can see Bryan is going left to right to left and while he doesn’t do that often, the Phaze 4 worked pretty well from there. He really was able to shape the lane pretty nicely.

Here are a few shots with the Phaze III as a quick comparison and you can quickly see that despite being the same oob finish and the same core, the Phaze III had a smoother, rounder, earlier shape than the Phaze 4. Clearly, the R3S hybrid cover has more underlying grit that allows the core to really churn just that bit sooner. It outhooks the Phaze 4 by a small bit but more tell-tale is that when he misses in, he leaves single pins rather than buckets. He also tried the Spectre and you can quickly see it is just about on top of the Phaze III for him. And while there is a difference, it still begs the question are they different enough? The Phaze 4 would clearly be mid late for Bryan. Phaze III is currently in his bag. Spectre would be a replacement it’s so close. Bottom line, for most bowlers, you only need one of these. For a tournament bowler or high average bowler looking to have a bit of niche difference, the Phaze 4 could compliment the P3 or Spectre as a step down.

Storm Phaze 4 vs Storm Spectre
Let’s take some time to do a direct comparison between the Phaze 4 and Spectre. Overall, you’ll see that they aren’t miles apart from each other. Both clean and relatively angular balls. Both do what Storm does best, response down lane. The Spectre’s R3S has a stronger cover underlying the 1500 grit polish than the R2S of the Phaze 4. Ultimately, that means the Phaze 4 has a somewhat thinner ball reaction. That’s kind of how I describe when more of the reaction happens after the end of the pattern than throughout the lane. The Spectre in my mind is Marvel-esque. It has a round boomy move down lane. You can see the balls can manage lots of area on the lane from direct to looping it. I actually think despite the Spectre being a little stronger, the sharper down lane reaction allowed the Phaze 4 to manage more versatility from deep. I could get it to hit harder since it’s storing energy a bit more.

The difference in ball reaction interestingly was a little more obvious as a 2-hander where they separated by 5 boards with my feet. The rounder and bigger Spectre required me to be deeper than the later and snappier Phaze 4. Being that deep in the oil finally exposed the Phaze 4’s limits in terms of strength. Don’t get me wrong, it doesn’t come off as week. But a bit more delta appeared.

So do you need both of these balls. For me, both of these balls fit in the Mid Late Category in a 6 ball arsenal. That’s essentially the ball to use on lighter conditions or late in a block. They are still both fairly strong in a sense having huge blocks so if you have desert conditions, you might want another option below. However, in the end I’m a bit torn because long story short, no I don’t need both balls. I loved the Spectre for my game when I first tested it. But the Phaze 4 also rolled amazing for me as well. But I’m torn because no, I don’t need both and that’s my final answer on that. If you want a nuanced bag, you can maybe adjust the Spectre surface to bring it up stream a bit in the bag and then keep the Phaze 4 slotted where it is in the Mid Late category.