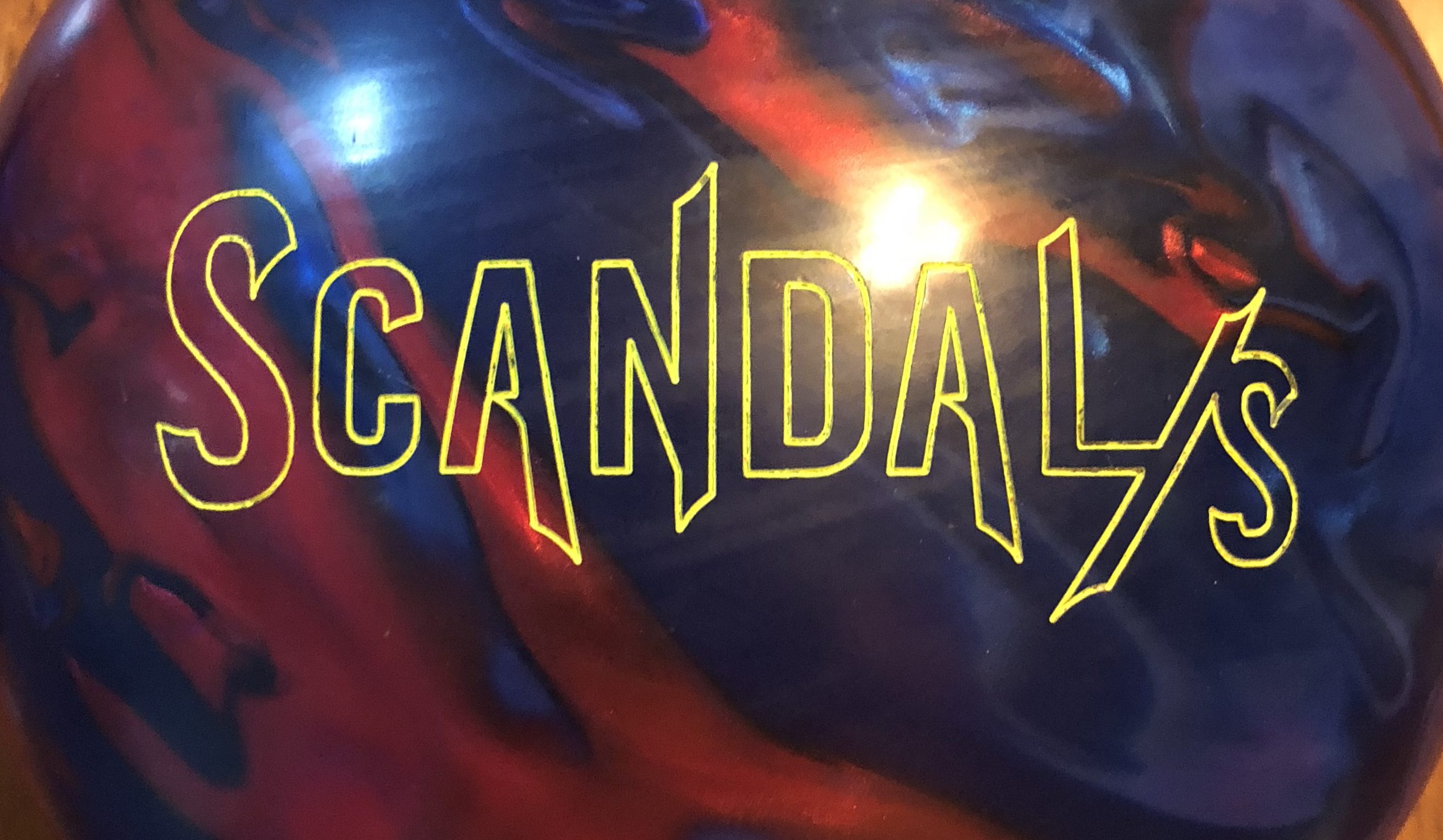 This Hammer is even more Scandalous… First Impressions
I was immediately attracted to the Hammer Scandal/S roll. The cover gives it a midlane read while the ball seems to have the “reliable” pop downlane. That’s usually a good recipe.

Value
B
In terms of bang for the buck, the Scandal/S scores a solid B. It’s a lot of ball for rev-dominant styles on your typical house shots but it has the strong backend motion that will bring it into plan for matched players trying to blend the pattern and speed dominant players looking for midlane read. Being a symmetric ball will also make it a bit more versatile.

Overall
THS: B+
Sport: B+
The Scandal/S marks the return of the big symmetric Scandal core into the High Performance Line. Hammer has 2 asym cores currently in the top line, the Rip’D and Gauntlet cores. While they perform pretty differently, there is some redundancy in the line. I imagine Hammer will commit to the Rip’D line being the latest. But I think the Scandal was a great rolling core and I believe it left a gap when it left the lineup. It’s got that smooth but boomy shape that I personally love. It’s obvious that shape is back as soon as you throw the Scandal/S. It’s also obvious it’s very aggressive with a rough surface finish. With the boominess in the backend, it reminded me of the Track Alias. In fact, they are quite close.

Straight out of the gate, for my style, this is a lot of ball on a house shot. I had to get pretty much at 4th arrow on this fresh shot out to the 7-8-9 breakpoint. The nice thing with this ball is it really felt like it offered control of the lane. Meaning, I didn’t feel like the ball was going to be lazy off the spot, even while being that deep. That’s a nice feeling when you need to be in but are looking for the ball to do work downlane. Comparing to the Rip’D Solid, it actually covered a couple more boards as the Rip’D Solid is just burning up more energy. You feel more of that asym heavy oil ball chugging with the Rip’D Solid that can look a little lazy downlane when it’s not matched up to the correct volume oil.

Sean was next and with his higher rev rate and a bit more speed, he was able to be at least as deep as I and even further with no issues. The ball needs to see oil to get down lane and it has the juice to turn the corner really nicely through the pins. Sean was very comfortable throwing this piece. If you are around 500 RPM and have decent speed, you can be wheeling and dealing with the Scandal/S. A quick comparison to the Rip’D Solid shows you again that it’s got that big core which is laboring a touch needing more oil.

Bryan was next. His game is quite different than previous 2 testers with higher tilt and lower revs. Normally Bryan can take full advantage of strong motion balls. However, in this case, the Scandal/S felt strong in the fronts and mids but not enough punch downlane. It felt more labored for Bryan. The only thing we could say is that it wasn’t a good match up to have a strong symmetric on this condition for him. He saw similar strength and control with the Rip’D solid but definitely had more help in terms of down lane motion through the pins with the asymmetric core.

Sport Shot
We had an opportunity to test the Hammer Scandal/S on the heavier volume 43ft Chameleon. The Scandal/S had a good look for me with the midlane control but strong drive through the pins. I sometimes worry about aggressive backend when going more direct, especially on a pattern like this for risk of over/under. That is a risk on this pattern. Despite it’s strength, I did prefer the more controlled shape of the Rip’D and original Gauntlet on the pattern. Big difference here, asymmetric vs symmetric core. The asym sets better giving me more control.
Sean was next and he had a very nice look. The pattern is about 6 games old and getting deep with a symmetric core provides a nice shape for him. Sean is using the deep “fall back” shot. He’s in past the 5th arrow. The truth is he probably doesn’t need this much surface at this stage but he needed to get deep enough to not have the ball read too quickly. Again, the asym look of the other Hammer top end balls looked pretty good on this pattern.
Bryan had a much better look on this pattern. He is playing very direct as he normally does on this longer Chameleon. He saw a nice controlled arc to the pocket. Really simple and fairly effective.

Final Thoughts
Hammer set out to bring back a huge symmetric core into the top end and tried to give it more backend pop. They succeeded with the Scandal/S. It looks to be as aggressive as the original but the hybrid definitely gives it more jump downlane. Sometimes it’s nice to be able to put a ton of surface on a ball and still save angularity. Like the Track Alias, this is still a big ball but without that really big ball snow tire feel that you sometimes see out of aggressive solid surface asym balls like the Rip’D Solid. The transition from hook to roll is smooth but strong. On a house shot, it pops more for me than the Rip’D Solid. When the Rip’D Solid sees the right volume, look out as it also has the ability to pop downlane. So on most conditions, many bowlers may be able to better take advantage of the pop of the Scandal/S more than the stronger Rip’D Solid.