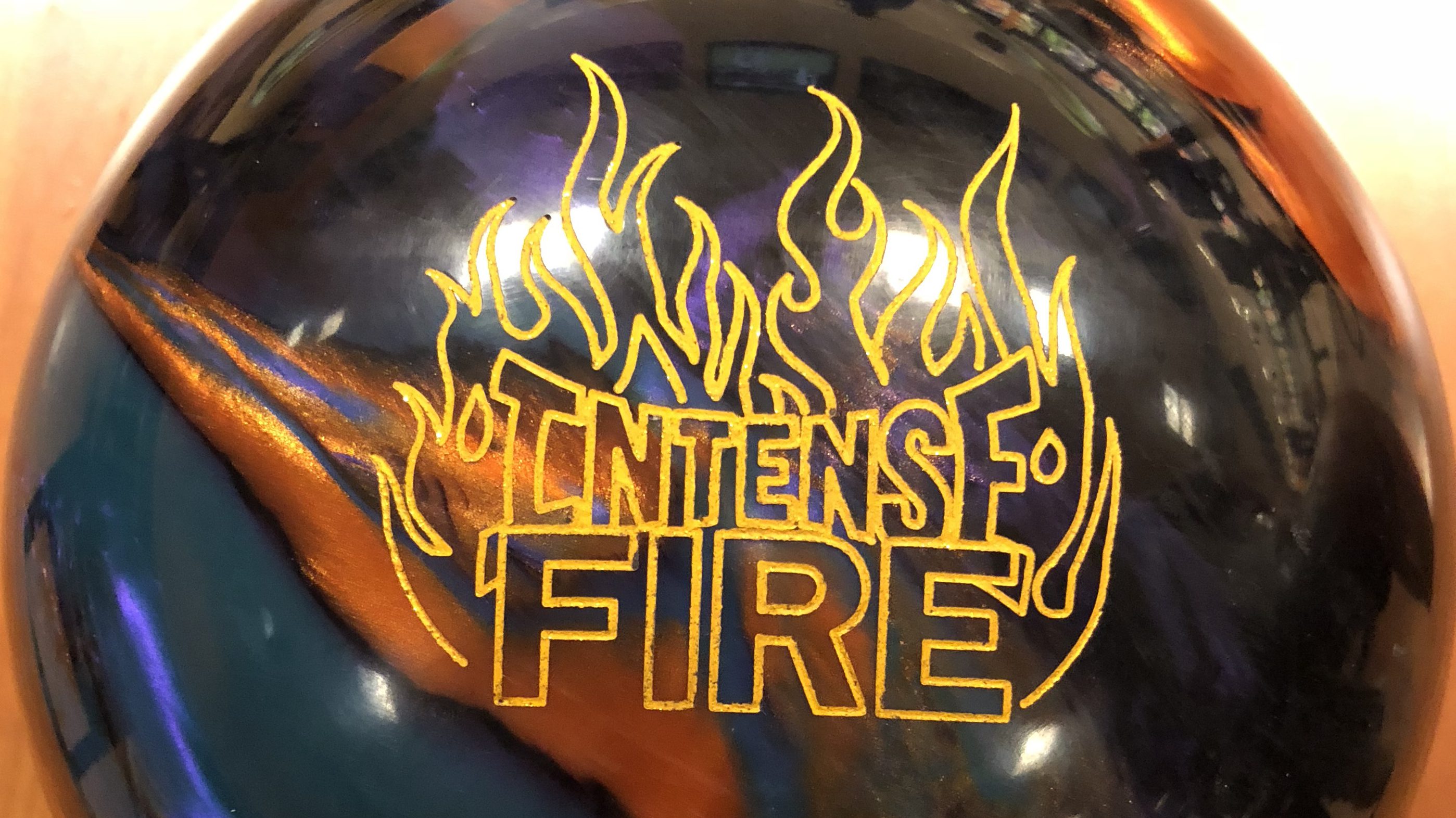 Does the Intense Have the Fire? First Impressions
The Storm Intense Fire is smooth. Not quite as buttery as the Code Red but I think that’s a good thing. It’s got a bit more oomph! It smells like Cinnamon…er…Lave Spice. Reminds me of one of my favorite balls of all time, the Storm Trauma!

Buy the Storm Intense Fire at PerfactAimBowling.com. Check out the video for a limited time discount code.

Value
B
The Storm Intense Fire offers a nice balance. With it’s different reaction than the Intense, what it loses for some bowlers, it gains for others. So overall I give it a decent value score.

Overall
THS: B
Sport: B
Interestingly, the Storm Intense Fire is somewhat of a contradiction. For the characteristics that I like about it, somebody will not like. It’s a bit confounding but you can make your own judgement as we discuss. The Fire is smoother than the original with similar clean motion through the fronts into the mids. The core is rolly but not snappy. I never considered it a snappy motion in the original either. But side by side, you do see the difference in downlane punch where the Intense is more downlane while the Fire is smoother. You would expect that smoothness to come at the expense of length but they are about the same and that’s where the confusion comes in. Normally Storm hybrid coverstocks are more than the sum of their parts. I don’t see that with the R3S hybrid. Everyone saw the Intense Fire as just a little less ball.
That said, I really like the motion. With me up first, it was pretty easy to find the pocket. The ball has a nice slot to the pocket on the house shot. Length and good motion downlane. It doesn’t feel labored, just smooth with a slow but building punch to the pins. It’s still a rolly core so misses out really don’t recover well. Misses in were better but can also be tricky with the shiny cover wanted to flip bit. You’ve heard me say it before but I would touch the surface to take away some of the out of box sensitivity. As a lefty I like it to read the mids more. I think this is going to be a good sport shot ball but more on that later.
Sean was next and it took him a little bit to figure this one out. The time it took was simply about realizing this ball is a little less overall on this shot than his Intense. He fought himself until he found the shot just outside the 3rd arrow. Yes seems a bit direct for him, especially considering he played the Match Up Black Pearl inside 4th arrow. The ball really looks like it’s revving up and wanting to do something but it does it later than you would expect and smoother than you expect. The original Intense also has that huge core rolling feel but you can see it plays stronger overall than the Intense Fire.
Bryan was next with the Intense Fire. Again, he saw that it’s a little less than he expected in terms of board coverage. He had to draw closer to the edge of friction however had to be really careful he didn’t put it into the friction too early. Too early and it’s either going to puke and not make it back or not hold on as it reacts too aggressively. He had to straddle the friction line a bit. So his line was fairly direct going 8 at the arrows to 7 downlane. With the Intense, he can throw it straight into the dry and get that strong “pearl” bounce to drive through the pocket.

Dave tested the Intense Fire and he made easy work of the house shot. The Intense Fire seemed to be a nice blend of roll and downlane motion. Miss in and it skids a bit more to hold the high hard one. Miss out a bit and it starts to roll and make it’s way smoothly back to the pocket. Sometimes that shot can be tricky with carry but not for Dave with the Intense Fire. Frankly not for me either.

Finally Guy. You can watch a couple of shots from him and you see what he does to the lanes. Generally he likes some surface as despite his rev rate, his speed can have him blow through the breakpoint occasionally. But he made quick work of his test session.

Sport Shot
I actually think the smooth characteristic that was somewhat confounding on the house shot is perfect for sport. Again as a lefty, I need surface to control the mids. Didn’t change surface for the vids but you can see it as being playable. It’s got a reliable motion. It’s got the roll I can see using. I can see it being a touch strong on this shorter pattern with some surface but I think very playable. With shine, it wants to go too long and then try to come way up the hill, which it does somewhat deceptively well.
Bryan found that what made it tough for him on house is what made it good for him on sport. The ball is smooth and he was able to see good control off the backend. So he just had to get lined up and could funnel it there without worrying about over/under, even with the shine. The Intense is much stronger downlane for him.
Guy saw a generally decent look. It was smooth and controllable but a touch of surface would keep the Intense Fire from going through the breakpoint or looking like it wants to.

Final Thoughts
The Intense Fire offers something interesting. While I’m not gushing straight away, I like it and the feeling grows. It’s more like a fine acquired taste. I gushed about the Code Red initially, only to find that while I absolutely loved the motion, I did struggle to find the right pattern to carry with it. Turned out to be the “safe” ball to keep me close to the pocket. The Intense Fire is similar but a bit more punchy. So I’m tempered but certainly never felt like I couldn’t carry with this ball.
One thing I will say. The Intense Fire has an understandable and reliable motion. So while it might sound like it’s not the biggest hooking ball, once you’re in the right zone, the ball makes you feel confident with it. You don’t feel like it will cheat you. It’s deceptively consistent and keeps you in play. There’s something to be said for a ball that makes you feel like you can just throw it and you’ll be OK rather than having to split boards to get a reaction you want. The Intense Fire is a ball where you feel like it can hide your mistakes. You can get on it or miss but it’s smoothness will blend it out. Just get it close.