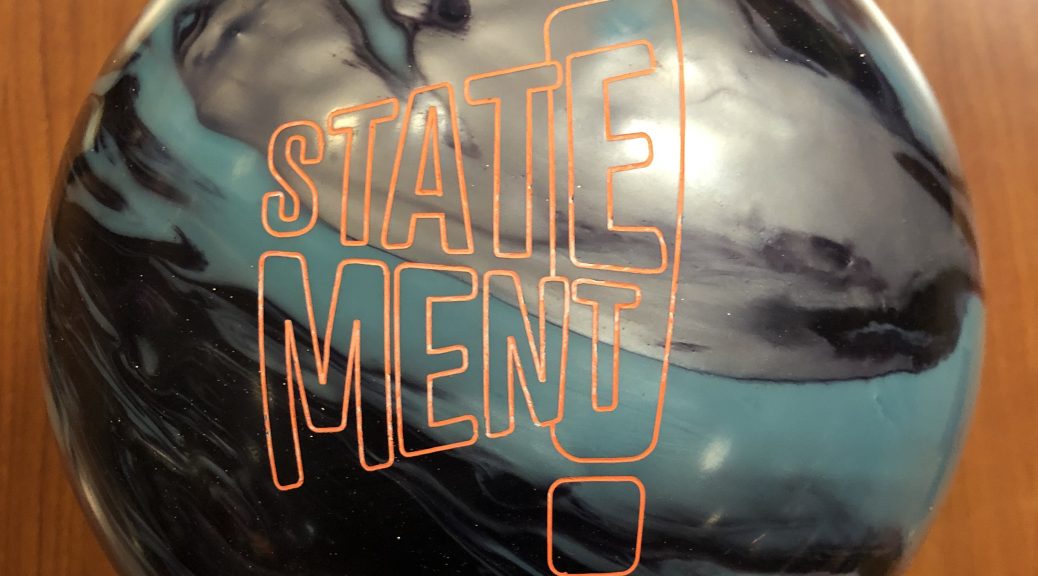 First Impressions
A little less angular than the Pearl. A little less ball than the Solid. The Statement Hybrid offers a different look than the other 2 and it’s worth a look.

Thanks to Jeff Smith and Pure It Bowling for drilling our equipment.
Buy the Hammer Statement Hybrid at PureItBowling.com.
Thanks to Limerick Bowl in Limerick, PA.

Overall
THS: B+
Sport: B+
The big thing for me with the Statement Hybrid was it allowed me to play in my sweet spot. If I can be right around the 3rd arrow, I’m comfortable. May sound weird to focus on some spot on the lane but house shots are generally designed with a wall of oil between 8 and 8 there or thereabouts. So you want to come out of the pattern at the right time to generate the right type of angle to carry on house shots. Long story short, this ball is strong enough to allow me to play in the oil with a belly into the dry. It generates the angle needed to work. If I miss out it came flying back. Throw it right and it looks sweet. I love when the big asyms can generate angle that is also heavy rolling. The more direct shot moving the breakpoint in didn’t overskid as it simply looked as good as the other shots. Oh if I didn’t say it yet, this one is really pretty. That blend of aquamarine, silver and black looks nice. In the end this ball was comfortable to throw, almost like a glove on the house shot. The Statement Solid was very strong while generating enough angle. It forced me a little deep. The Statement Pearl was more angular but really covered about the same amount of boards. This one just right in the middle, being pretty clean, generating angle while also not requiring me to open up my angles as much as the solid did.

James was next. With his style he had a good look but not as good as mine. Overall shape was a little smoother than me as it transitioned through its phases. Just to pick on the deltas a bit, it deflected more for James through the pins than it did for me. Where I had really good drive, it kind of looked like it always wanted to but didn’t always quite complete that roll. It’s like it scooted too long before getting into the final roll phase. When he went more direct, it just seemed to have less energy bleeding through the earlier friction. Overall he had very good pocket control with reasonable forgiveness in both directions.

For Bryan, his look was as good as mine. He felt like he could send it to the friction and watch it peel back without issue. He had good carry and drive. I recall that he also had a nice look with the previous Statement balls so no surprise there. It’s an asym that is clean but enough late midlane transition to give Bryan that good look he seeks from these type of balls. You’ll see that misses in definitely did not hold. Missing out was definitely the better play.

Sport Shot
We tested on the 40ft Kegel Abbey Road pattern. I really liked the Statement Hybrid on the sport pattern. I had the same good look. And just as I mentioned with Bryan, don’t miss in as it will not hold but missing out gave that nice sweeper carry.
For James it’s not much different than what he saw on house. It’s just a little more finicky for him. That slower later transition just meant that he got more deflection and less forgiveness. Missing out was not as good as it was for Bryan and I while misses in still don’t hold.
Bryan saw an excellent ball reaction as well. He saw a big move and just really good drive. He could stay in his comfort zone. The Statement Hybrid was the easiest ball to strike with in our test session.

Final Thoughts
I’m not going to use the term goldilocks for the Hybrid as the Statement line is really good top to bottom. This one isn’t as angular as the pearl and isn’t as strong as the solid. That’s not a bad thing as its distinction allows you to more clearly understand when to select it from the 3 balls based on the conditions you are seeing. This was a fun one to throw.