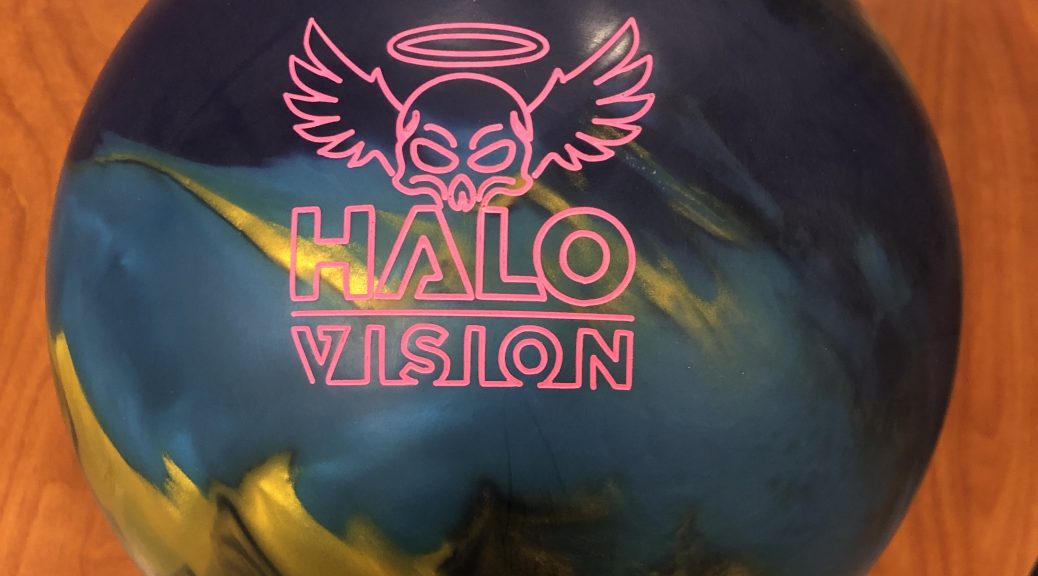 The Halo Has The Vision… First Impressions
OK, we have a massively strong asym in the Halo Vision. A little stronger off the spot than the original Halo, just as strong if not stronger.

Thanks to Jeff Smith and Pure It Bowling for drilling our equipment.
Buy the Roto Grip Idol Pro at PureItBowling.com.
Thanks to Limerick Bowl in Limerick, PA.

Value
B-
The Halo Vision is a strong asym look that covers boards but will be limited to higher volume conditions or certain styles on medium conditions.

Overall
THS: B
Sport: B
Roto Grip releases this hybrid after the solid and pearl. The thing we can say about the Centrum core is it rolls very forward. That blocky asym shape gives it defined change of direction which is smoothed out a bit by the cover. In the Halo it was defined but smoother. The Vision has a bit more oomph at the end of the pattern but this is still a lumbering, tumbly core. The most obvious benefit of this motion is midlane control with some good downlane motion. You feel like you can throw it away without it feeling like it’s going to blow through the breakpoint. It feels aggressive enough. If you force it through, it might be trouble as the core is not really designed for tons of left to right motion, especially as it bleeds in the midlane. I had to get very deep with it. My hand plus deep with a strong asym means iffy motion downlane. If I slow it down just a touch, it reads hard. If I get through it, it is a bit slow to turn over. Eventually, I moved left and suitcased the ball more to get less revs on it. This allowed the ball to bleed less energy going side to side which allowed it to drive through the pins better. I’m really curious if the cover will settle and make this ball look really good given it’s eTrax-19 nomenclature and what we saw out of the Idol Pro. Sometimes when covers settle on asyms, it let’s them get downlane a little bit more and be more explosive.

Jeremy was next and the ball looked fantastic for him. His higher speed, revs, and tilt means the ball gets downlane a little easier than mine while standing up hard and going through the pins heavily. Whereas sometimes symmetric balls have a bit of over/under with strong over-continuation for Jeremy, the strong setting motion of the asym looked really good just stopping itself at the right time and tumbling heavy straight through the 8-9. The simple truth is he threw a lot of strikes and they looked like copies. He could miss in and the ball stops and still carries. Misses out are pretty lazy for the same reason.
Bryan was next. The shape looks good but he did struggle feeling a bit trapped. He had to move in to give it room but again, the setting motion seemed to set too early and forward. He couldn’t square up so he wound up slowing the ball down to find the pocket. There are a couple of points here. One of his favorite balls is the Storm Lock which is also a hybrid. For the house shot, he can use a polished version to better effect. Also, the Rad-X core is not as forward as the Centrum. Rad-X can be very angular, So ultimately he misses out on that angularity in the Halo Vision.

Sport Shot
We tested on the 40ft Kegel Abbey Road pattern.
I had a decent look. The ball is obviously on the stronger side and it has that typical heavy roll of a big asym. It’s sometimes feels like it’s struggling to get into a roll. When it does it hooks hard. The benefit is midlane control so you don’t feel like you can blow it through the breakpoint.
Bryan’s look was exacerbated on this pattern. The pattern plays with a feel of a bit more friction and that forced him even deeper to see any decent ball reaction. Then still had to slow down the speed to let it shape.
For Jeremy he had a similar look except the pattern is much tighter. You can see small misses are definitely magnified on this pattern.

Final Thoughts
The Halo Vision is a lot of ball. It’s basically as strong as the Halo solid but with a little more downlane pop. So overall it looks a touch sharper. It’s definitely more ball than the Halo Pearl. I can see this reaction working for a few different styles. Roto Grip referenced the Defiant Soul as their benchmark for this piece. Time will tell if people will get that vibe. Ultimately, the Halo Vision will definitely match up for folks who need a strong piece in their bag.