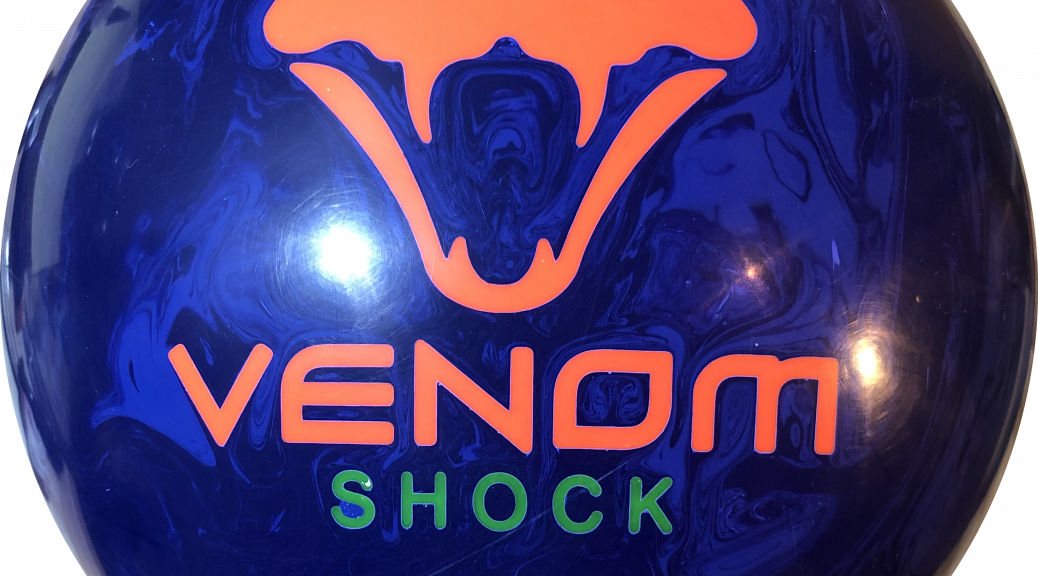 First Impressions
For me, the Venom Shock finally looks like the ball everyone else sees.

Overall
The majority of bowlers really like the Motiv Venom Shock. So why is it that I never liked it? Well simple but complicated. This is a very cover dominant ball. Core is medium weak while the cover is very strong. So when I had this ball previously, I would start out more direct and find it hooked too much. As soon as I got deep enough to compensate for the cover, the ball couldn’t effectively make the turn. So I was frequently left with weak hits and flat corners. My game has changed a lot over the years and now that I can get the ball to float more downlane, I wondered if I can finally fill the mid control slot with what some believe is the perfect ball there. I can say that the Venom Shock finally behaves for me the way it does for most other bowlers. Yes, it is still a bit too strong for playing direct so I have to open up the angles. But now when I do, it works. Here’s the interesting nuance I found. When throwing it normal, it did sometimes hit weak. On the house shot, it was too much ball and it felt like it was burning up, deflecting through the pocket. Might sound like before. However, when I just committed to a stronger release and higher speed, the ball absolutely came to life. Now that I can do stuff like that, this ball was supremely fun. Now I will say that it is surprisingly a bit more angular than I would expect for a mid control and something others have noted initially. However, it does calm down into the perfect mid control ball and I plan to keep it in my bag there.

I did throw a few shots 2 handed. What I found is what you would expect for a rev dominant higher rev style, this is a lot of ball. This essentially becomes a strong control ball. I’m really trying too hard to get this ball downlane which meant inconsistency. Probably not an ideal reflection for more developed 2-handers who can generate more commensurate speed.

So there you have it. I think I’ve found the ball I will be committing to my Mid Control part of the arsenal. Yes it’s a little strong initially but we’ll use it to calm it down. And in case there was any question, I used it on a sport shot which is where I do 99% of my bowling and it made minced meat out of the pattern. I am so happy I finally get to personally feel what everyone else was feeling with the Motiv Venom Shock.

A Power Player’s Perspective
So we started with my take for my game. Here we have Sean testing the Motiv Venom Shock. Firstly, I’ll apologize for the camera shake The truth is I already know Sean loves this ball. He had it as the mid control ball in his bag for a long time until the cover finally lost steam. With that said, he dominated with the Shock. It really showed how a cover dominant weak cored ball could look amazing for a power player. That higher speed and rev rate just made the ball powerful while offering great blend and control.

A Stroker’s Perspective
Today we have Bryan testing the Motiv Venom Shock. If you’ve seen the previous videos, you’ll note that this is a revisit based on my initial personal issues with this ball. You’ll probably also note that I see now what everyone else was seeing. But what about Bryan? Well it may not be very surprising that the Venom Shock is somewhat middling for him. Really good shots strike. So what? Middle of the road shots seemed to have a lower carry percentage for him. I think this goes straight to the issue I had years ago with the Shock. Cover is too strong from the straighter trajectories but when he gave it a little room, it didn’t really have enough downlane. He had the basic look of a benchmark in terms of having room inside and out. However, that room was only a safe zone. In other words he got no help. He would just hit light or a little high with neither miss every really carrying. My take is this ball matches up better with power players and those who can get enough speed to get it store downlane energy.