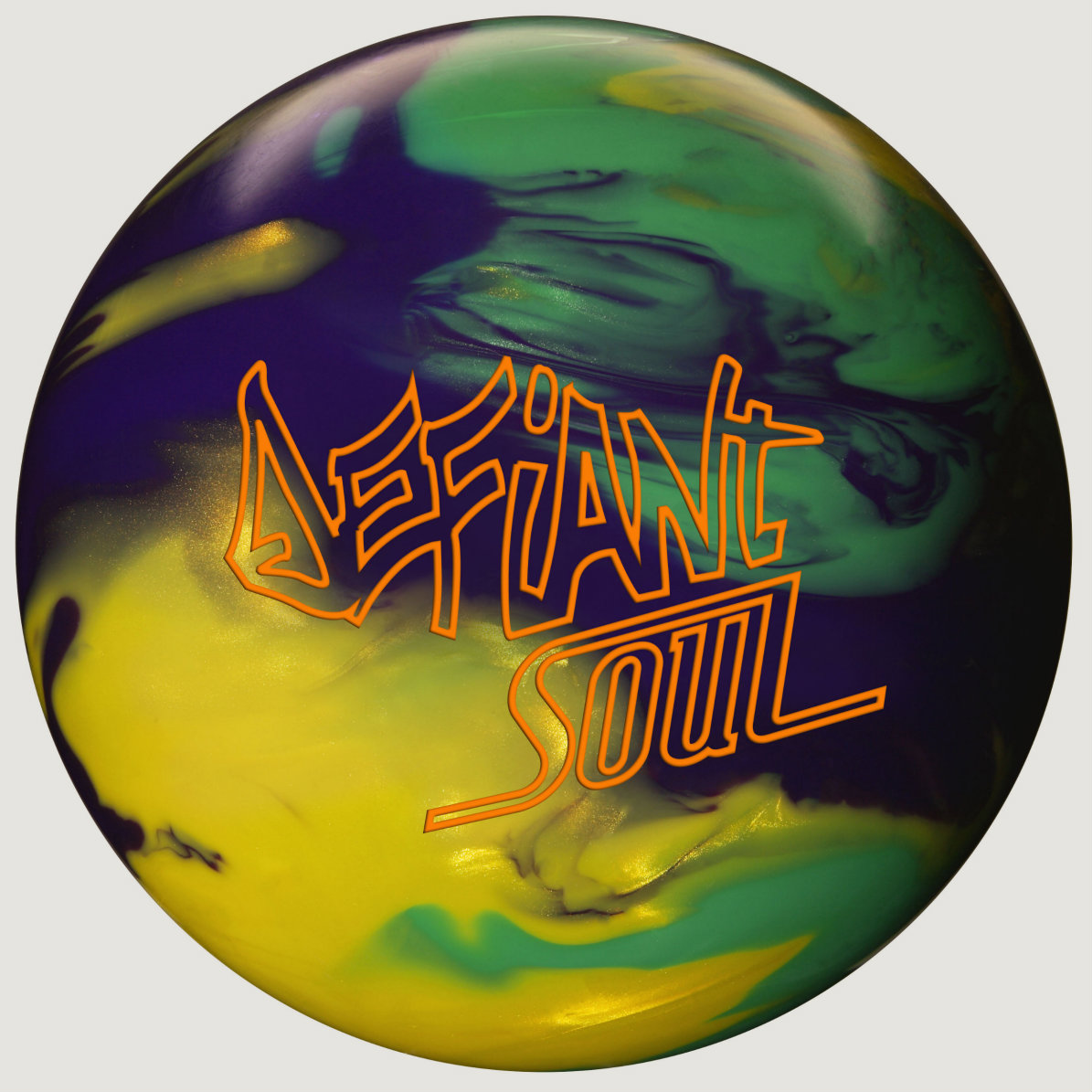 This pin down layout is fairly typical and generally allows for medium transition to roll with slower, smoother transition at the breakpoint. Pin distance for all bowlers should produce large track flare. Remember that coverstock accounts for 70% of ball reaction, but the core will create the dynamic shape. Your drilling will alter the shape to suit your game and conditions you bowl on.

First Impressions
This ball seems to be a magic formula. Each bowler liked it and was amazed by the backend recovery. We were going to have some real fun testing this one.

Value 8.5/10
Another high end ball with commensurate pricing. So the value proposition? We rated it quite high as the ball seemingly has an amazing ability to be something special for every bowler. It’s aggressive to be sure, but each bowler clearly saw the strengths without fail.

Core
The Paragon core is used again here in the hybrid version of the Defiant line. It’s an asymmetric core with a low RG of 2.49, differential of .054, and a mass bias of .17 for a 15 pound ball. This is a very aggressive and continuous core. We’ve discussed at length how it looked in the Defiant but we’ll talk more about the ball reaction in the hybrid Soul here. This seems to be a stand-out design.

Cover 9/10
OK, let’s start with the major change from the rest of the Defiant line. Roto Grip introduces the hybrid 77H cover. They seem to have moved away from the wordy naming convention to numerical centric naming. Whatever it’s called, it’s slotted in between the Defiant and Defiant Edge.
Why did we rate the cover so highly? Well, when we talk about the ball reaction it will be crystal clear. Suffice it to say Storm knows how to make hybrid coverstocks. I’ve said this before, but the majority of Storm/Roto Grip hybrid coverstocks are more than the sum of their parts. The standouts are the Storm Hy-Road and Roto Grip Nomad Dagger. They were absolutely special and were better than their solid and pearl counterparts in totality. Of course, there are conditions where you might prefer a solid of a pearl version, but all in all, those hybrids tended to have the clean reaction of the pearls, the backend of the pearls, but the control of the solids. There some that were not that way. The Infinite Theory was not more than the sum of its parts. It was less overall than the Theory and Critical Theory. However, the factory finish was different on the Critical, making it react more like the hybrid.

Reaction THS = 9/10, Sport = 9/10
Clearly, this ball was magical on our test conditions for most of our bowlers hence the high scores.
So what do we see?
Overall the ball offered excellent control of the midlane while it created a booming backend move and great continuation. Every bowler saw that midlane control and each one saw excellent backend motion relative to their bowling style. Let’s put it this way, we had over 7 balls on the rack and none of the high end aggressive stuff had the backend move this one had.

Stroker. Eric saw a very strong overall motion. Despite his lower rev rate, he was able to throw this one away from the pocket and watch it walk back with authority. He got about similar length to the Defiant, but more backend motion.  You can see from the Digitrax below that the Defiant and Defiant Edge had quite similar reactions, the Defiant Soul offered so much more entry angle.  So while getting 5.5 degrees with the solid and pearl, he got over 7 degrees with the Defiant Soul!  Entry angle is not everything, but it indicates the capability of the ball to make a big turn on the backend.  So he saw similar length to either of the other balls, but more recovery on the backend than the Defiant and less skittishness than the Defiant Edge.

Tweener Jeff has a much higher tilt than the other 3 bowlers with about 45 degrees or more of axis rotation. With the amount of axis and side roll Jeff gets, he never has a problem getting a ball to push. This pin down drilling matches up quite well for him and added to the Defiant Soul, it is without a doubt the strongest ball in his bag.  Jeff generally gets slightly less backend than the rest of our bowlers as he likes to play fairly directly with the natural push he gets. With the Defiant Soul, just like Eric, he can give this one some belly and it comes roaring back. It really controls the midlane for Jeff which is a perfect look for someone who gets more length due to their release.  I can’t say enough about how much Jeff liked the Soul’s ball reaction.  Simply awesome midlane control and a confident backend move.  He did not have a chance to compare to the Defiant or Defiant Edge.

Norm was our second tweener. Norm is more up the back with also a higher than 45 degree axis rotation. Hence, he can generate a lot of side to side motion for a tweener.  Norm saw more of the same, being able to open up his angles without being concerned about this ball making it back.  He probably saw the least difference between the Defiant, Defiant Soul, and Defiant Edge than the other bowlers did.  He had a lot of forgiveness with all three balls, however the Soul was the most consistent in terms of carry.  Put another way, he had the ability to spray the balls and get back to the pocket on this 42 ft pattern.  However, when missing to the outside with the Defiant, it labored just a bit compared to the Soul.  The Edge was a bit more skittish at the breakpoint.  However, I want to be clear that these were relatively minor differences for him on this pattern.  The Digitrax analysis might look like there are big differences, but he could probably throw all three balls on any of those lines and get to the pocket.

On to our cranker, “Revz”. For Sean, his high revs and the high strength of this ball made it a complete monster. Yes, it destroys the rack. You can see how many boards this ball covers for him and how much entry angle he was getting. He got over 8 degrees and a little less with the Defiant as it doesn’t quite store as much energy as the Soul. Either way, someone with this much hand will rarely ever need a ball this strong. It’s just so much ball that he’s got to fight the ball to push it downlane. He would likely have to polish it or use a different layout, but either way, it’s very strong and continuous. It’s more than a cranker needs on a typical house shot. When there’s a lot more volume, this ball could have possibilities for a cranker.

Tweener Jeff saw more of the control he saw on the house shot. He had a great look on the Athens pattern with the Defiant Soul. On the one hand, the ball just seemed to overpower the condition and was like a laser beam to the pocket. On the other, he had such a good look, it gave him tremendous confidence. That is a deadly combination that any bowler would kill for. Not saying this is the cure to everything. It just matches up for Jeff. It simply gave him perfect control of the midlane and the ball transitioned perfectly for him and his game for great carry.

Power Tweener For Norm, this was a very strong ball. For a bowler who has that much side to side motion, you will want higher volume patterns. On this medium volume Athens, it was a lot of ball. On a tough condition that has a 2:1 ratio, you don’t want to fight equipment. He had the typical consistent midlane read we’ve raved about, but the backend was quite strong. With that, he was in a little bit of a conundrum, not wanting to open up his angles too much, but getting a very aggressive motion from where he was. If your game is similar to Norm, you need to keep in mind that this is a ball that could be too much for medium conditions.

Cranker For Sean, this ball again was very strong. With the cleaner backends of a sport pattern, he got tremendous entry angle. He could make it work, but this ball is just too strong for this medium sport pattern for someone with this much hand.

Overall 9/10
I think we’ve gushed over this ball quite a bit so let’s wrap it up. The Defiant Soul seems to be the perfect match of cover to core. It offers the same midlane control as the Defiant but more backend angle and continuation. When compared to the Edge, it offers similar angles, but a more booming backend overall and more midlane control. Overall, it’s more than both the solid and pearl, which makes it more than the sum of its parts. This Paragon core offers impressive midlane control yet still creates really strong, booming backends…wait, I said that already didn’t I? Well, it can’t be understated.
As you saw, all bowlers could have a look with the Defiant Soul. I really like when bowling balls are consistently matched to bowlers. Meaning, you have less hand, it’s less ball and if you have more hand, it’s more ball. Sounds obvious, but some strong balls burn up, showing less backend motion. In the case of the Defiant Soul, it stores energy for all bowlers. Remember, we are testing on a 42 ft house pattern and 40 ft sport pattern. The bowlers who have more hand found it harder to use the ball as they had to get deeper than usual or try to force it through. You will need to find heavier conditions. With that being said, I believe most bowlers are closer to our stroker/tweeners and thus will get a great option at the top of their arsenal for medium or medium/heavy conditions.