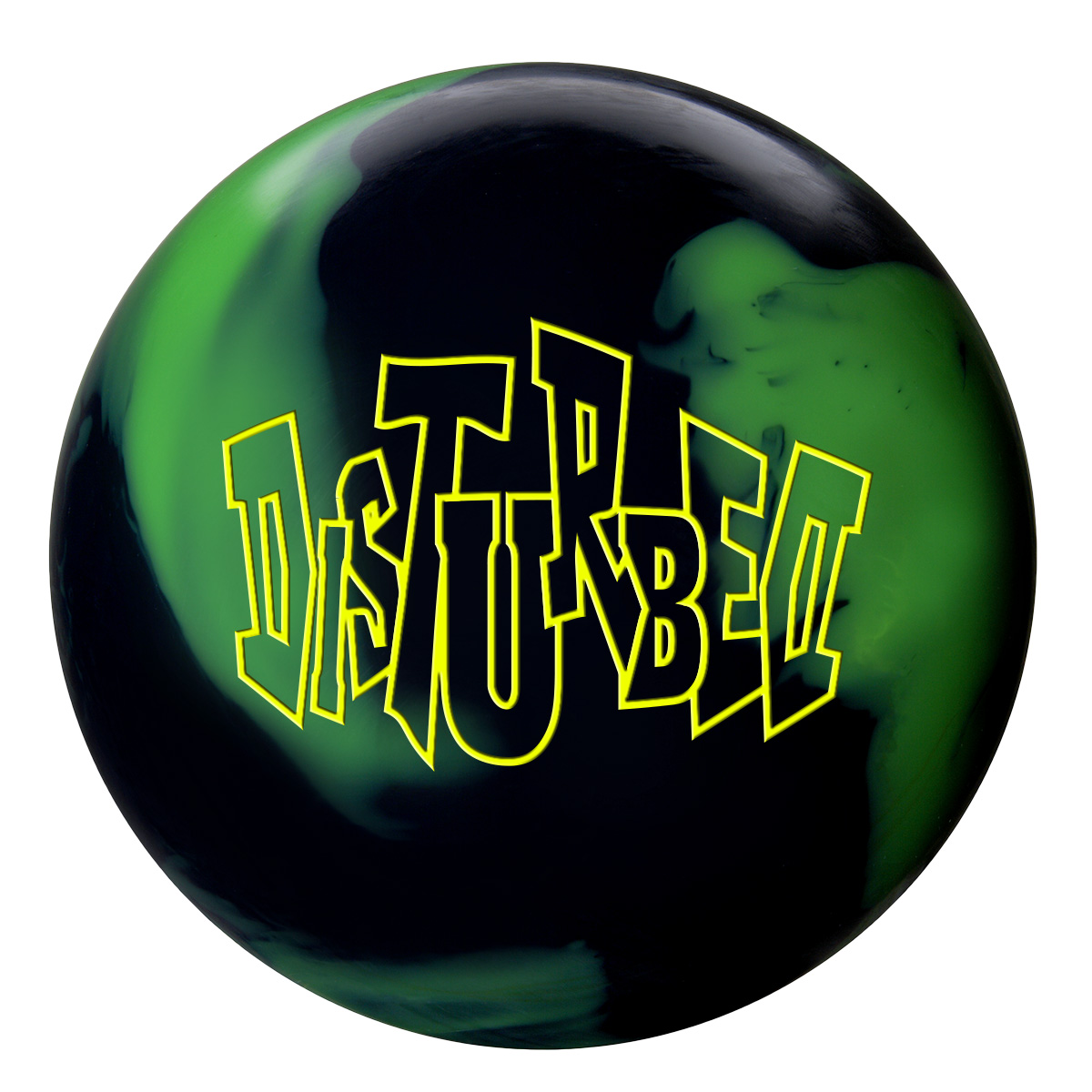 This pin up layout is fairly typical and generally allows for a ball that gets into a medium roll and medium transition at the breakpoint. Pin distance for our bowlers should produce medium to large track flare. Remember that coverstock accounts for 70% of ball reaction, but the core will create the dynamic shape. Your drilling will alter the shape to suit your game and conditions you bowl on.

First Impressions
It looks like Roto Grip finds the formula for a benchmark ball once more. Not flippy, not soft. Is it just right?

Value 8.5/10
Roto Grip releases another mid level ball that looks to offer plenty of versatility which makes it a good value.

Core
The Disturbed has a new core called Middle Roll 70. It has an RG of 2.50 and differential of .043 for a 15 pounder. These are “middling” numbers and that’s not a bad thing. The core offers decent length with a rounded and smooth backend reaction. We actually saw quite a bit of flare with this core.
I like the shape of this core and the reaction it creates. It may not make complete sense, but it reminds me a lot of the core from the Storm Second Dimension. I find that cores that are more or less symmetrical whether you cut them vertically or horizontally have a unique shape on the lanes.

Cover 8/10
The Roto Grip Disturbed uses a new solid cover called 66MH. It’s very hard to rate a new cover so early. What we can tell is that it matches up with this core very well to create a smooth and controllable, benchmark-type reaction. In its out of box 2000 grit abralon finish, it still allows for reasonable length with a moderate reaction to dry boards, giving it a smooth move at the end of the pattern.

Reaction THS = 8.5/10, Sport = 8/10
Well, I don’t think this ball is Disturbed at all. In fact, quite the contrary. It’s very much in control and very predictable. The cover offered reasonable length and thus doesn’t have as aggressive teeth as the top line balls like the Defiant and Defiant Soul. It allows for a moderate midlane read with a controlled motion off the breakpoint. You will not necessarily want to spray this ball to the outside since it will be hard for it to make it back from anywhere with the solid cover. However it will give you forgiveness by its consistent midlane reaction. It will be very interesting to see a pearl and hybrid cover with this core.

Stroker. Eric saw a very controlled reaction. He can easily play the shim with this ball meaning if he leaves a 4 pin, he can easily make a 1-1 adjustment and get back to flush and the same on the other side. The motion is predictable so those moves were extremely predictable. Eric got 4.65 degrees of entry angle which is plenty to carry well. It’s not quite as punchy as the Defiant Soul we tested recently, but that’s to be expected.

Tweener. Jeff plays more direct than the rest of our bowlers. Even though he’s got a higher rev rate than Eric, he has more axis tilt which allows for natural length as we’ve mentioned before. Generally, he doesn’t find much use for these pin up layouts but he had a great reaction with this ball. He could square up the way he usually likes to and the midlane control and backend recovery matched up very well for him. He saw it as a perfect stepdown from his Defiant Soul when the lanes have broken down a bit and he wants to stay in the same area. He got 5.63 degrees of entry angle with great carry. His breakpoint is about 35 feet due to how direct he’s playing and the ball just had terrific continuation through the pocket.

Power Tweener. Norm plays more angle than Eric and Jeff and also has relatively little axis tilt. This means that he doesn’t generally get lots of natural length and when the ball turns over, it will have a heavier end over end roll. For Norm, it looked like a possible benchmark reaction for a house shot. Again, not too flippy and not weak. He got 6.7 degrees of entry angle which is quite strong. This is pretty typical for him and shows that this ball can definitely turn the corner. Again, it allows him to shim and maintain the pocket.

Cranker. For Sean, as usual he’s playing the extreme inside line and at times lofting the gutter cap. Sean also can see that the ball has a predictable motion. It doesn’t have that over/under reaction despite getting 8 degrees of entry angle.

The Athens pattern can play pretty tough and it was particularly so on this pair. It made the job of our bowlers that much harder. The 40 ft pattern allows for multiple angles of attack, but this particular pair had less options for our bowlers. So goes a difficult sport pattern.

Stroker Although Eric plays fairly straight, he had to move the whole line further inside as there was simply no forgiveness outside 9 on this pattern. Despite this the flush shots and lighter shots still carried well. Eric had a 4.5 board belly and had 4.5 degrees of entry angle. I think it would have helped Eric to have a stronger ball on this fresh pattern. This ball would likely work on a condition that’s slightly less slick than this one or after it has broken down a bit.

Tweener Jeff played even straighter than Eric with a 3.5 board belly and 4 degrees of entry angle. We expected to see less angle with this line but again the ball carried quite well. For Jeff, the Defian Soul would likely yield better control of this slicker condition while the Disturbed would be a nice controllable stepdown.

Power Tweener Norm with his more end over end roll actually was able to move further right and play more of the “track area”. Being able to take advantage of that, he was able to get 6.6 degrees of entry angle. The backend reaction was on the strong side on this sport pattern but the ball wasn’t quite strong enough to allow him to get deeper.

Cranker As usual, Sean can make a bowling ball come back from almost anywhere. The Roto Grip Disturbed gave Sean 8 degrees of entry angle. It had a smooth but strong backend for Sean with great continuation.

Again, on this particularly tough playing pattern, although this ball was predictable, the fresh pattern tends to favor a stronger ball that will make it back. The scoring line on this pair simply demanded something more. However, as the pattern breaks down, the predictable motion of the Disturbed would be perfect. If this pattern played with a bit more friction as it has on other patterns, I believe there would have bene a higher likelihood this would have worked perfectly on the fresh shot. Nevertheless, this should give you a very good idea of what this ball is capable of.

Overall 9/10
Roto Grip Disturbed, what do we have? Well we have a very predictable smooth ball motion. A benchmark ball that’s consistent is a great thing to have in the bag. The remarkable characteristic of this ball is that it is extremely predictable with moves. Move 1 and 1, and the ball does exactly what you want it to do, no surprises. It doesn’t react extremely fast to dry boards which gives it that consistency. You will not want to leak this one too far out or it will likely not recover. However, stay close and you will be rewarded with a consistent and continuous ball reaction. I can’t wait to see this core in a pearl and hybrid version.