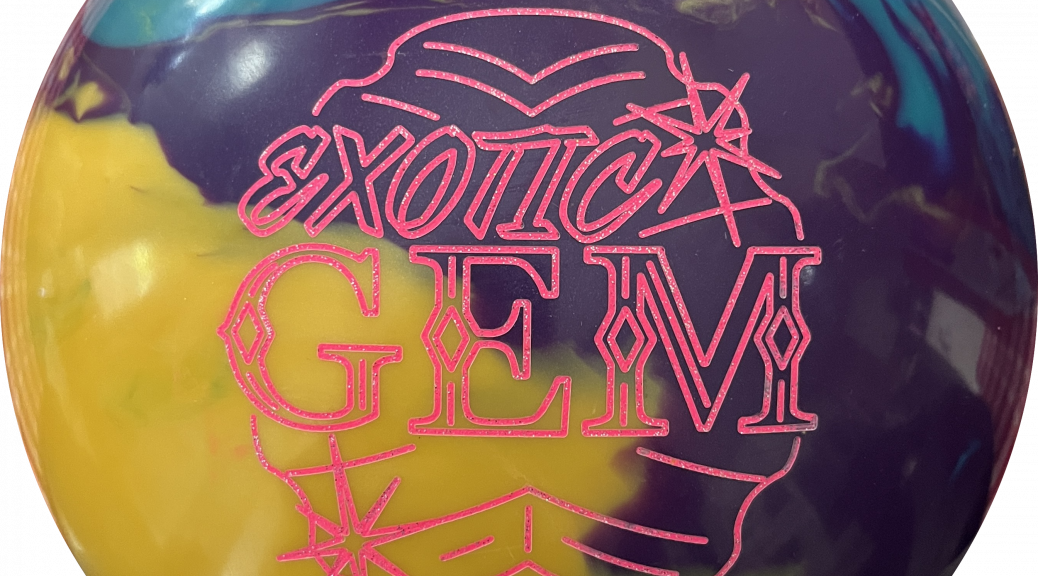 First Impressions
The Roto Grip Exotic Gem seems to bring back the traditional strong shiny asym look the Storm family is famous for, but with a decidedly Roto specific roll.

Overall
Let’s jump in and I’ll get into what I mean by that. Alright so we have a shiny pearl asym. I don’t know how many times I will say I hate the OOB gloss finish. It literally feels like it’s only meant for shelf appeal. Now you either scuff it right away, or suffer the weird over/under until you throw it for 10 games. Sean threw it a bit out of box initially and it just bears out what we always see. Very long in oil and too responsive to the friction wall of a house shot. Anyway, I’m not going to spend any more time on that, we scuff it lightly with a 2000 abralon pad to cut the shine ever so slightly and we are now able to evaluate the ball. I have typically enjoyed the Defiant core, it’s round and rolly and heavy rolling. Always have to match the cover finish to get the best out of the shape. In this case the Microtrax is a pretty responsive cover. Added to the strong core, with the scuff, Sean rarely saw any under anymore. You can see the clean but heavy roll. There’s a good balance of length while the motor is starting to turn over and when it finally completes the transition you get a strong boom. It is strong but I don’t exactly call it skid/flip because of how rolly the are is. However, it’s got plenty of pop downlane. Sean just didn’t have any miss room in and that tends to mean it’s on the stronger side overall and with the responsive cover, it won’t hold. Out was the place to go with the board coverage it is capable of. It places the Exotic Gem pretty clearly in the Mid Defined.

Bryan is next and he was trying to work out what is the right play with this ball. First couple of shots looked great and then it was confusing. He tried to get in, slow it down, etc. Was a struggle at first Then, boom he figured it out and it was off to the races. Let me explain. Part of the issue is these very walled house shots and match to his game. These shiny strong balls in mid defined are tricky because they are too strong to play in the wall of dry that runs to your feet outside 8 and not strong enough when he moves into the oil. However, we were talking and said, what is the usual trick on house shot? When it dries up, do what? Throw it harder! Well, Bryan decided to square back up to the right and throw it harder and more forward. It was basically throw it up 10. This is where many lower rev bowlers live. Now since he could get it downlane, he was able to take advantage of the balls response to the friction for good carry. Seeing this can be eye-opening since we are always looking for tricks to manage house shots. Sean, Bryan, and I almost exclusively bowl sport shots so sometimes the basic tricks to manage house shots don’t come as quickly to mind.

Final Thoughts
So let’s recap. The Roto Grip Exotic Gem is a Mid Defined ball. Going back to my initial comments, its a bit of a traditional strong shiny asym in that it has that heavy roll and strength we’ve come to know from balls like the 900 Global Altered Reality, Nuclear Cell, No Rules Pearl. Clean cover, heavy rolling cores, noticeably strong to where if it’s not matched up, you’ll start leaving flat corners. The reaction is clear that when you can’t manage to get the shape to work anymore, you drop down to a Mid Late ball like the Night Road, Wolverine Dark Moss, etc. So assuming you can get past the traditionally swirly Roto Grip colors and you need a clear Mid Defined shape, the Exotic Gem will fit nicely in the bag.