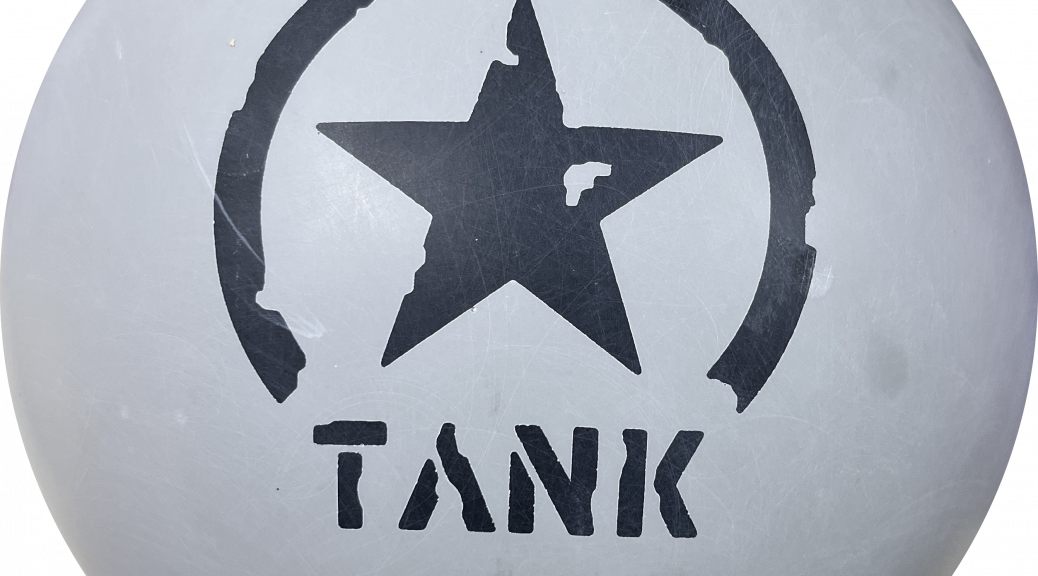 First Impressions
The Motiv Carbide Tank is clearly another super urethane, well it’s Microcell Polymer but it will be compared because of the shape.

Overall
Here we go again with these urethane like balls. I keep saying that because it’s easier than microcell polymer. I will just add that the MCP in some ways sits in between reactive resin and urethane in many ways.

Low oil absorption but more downlane motion and continuation. I recall very much enjoying the Covert Tank and Desert Tank. The stand out was the smoothness of urethane but downlane punch that was stronger than traditional urethane. That helps bowlers like me who can’t naturally generate enough backend punch out of urethane but still want to be able to take advantage of the control motion that is unique to urethane. So that’s where MCP really holds its own. Big picture however, MCP ultimately rolls closer to urethane than reactive.

So let’s get to the bottom line with the Carbide Tank. Besides it reminding me of the White XS from back in the day, this ball is very strong. Again, we have another ball that has that sort of urethane shape but is way stronger than you would imagine. We just tested the 900 Global Zen U and the Carbide Tank is in the same vein. Basically this ball can be played similar to a strong defined ball on lane in many ways. Watch the ball reaction from Tyler and it tells the story. He’s playing between 3rd and 4th arrow and wheeling it to 7-8. Traditional urethane would not do that plain and simple. This is a step up and then some. Gives that nice rounded shape but still booms downlane. Now it’s not a sharp downlane shape. It’s just about the best of both worlds which will allow you to use it on higher volumes more direct while being able to open up the lane a bit on walled up house shots, at least if you are a similar style bowler to Tyler. Here’s a quick screenshot of the game he shot, just like those one take videos. Right out of the gate, very easy to use. Despite the big surface, or maybe because of it, the Carbide Tank had that big footprint looking shape. Shouldn’t be a big surprise given the Venom Shock has the same core. You get a little lower flare but also gain a control motion. We will do a comparison video as well which will make it more clear where this fits.

But before we get there, let’s jump into Bryan’s perspective on this. Historically, he’s enjoyed the microcell polymer balls. Like me, he finds them just that little bit more usable than urethane. It’s one of the reasons other companies are starting to do urethane plus to just give a bit more than old school hook and walk look of urethane. For sure, this is the most aggressive MCP ball Bryan has thrown so far. Yes it’s still early but with a nice rounded shape downlane that has more continuation that typical urethane. This is really important. That difference which might not look night and day makes usability night and day different. You can see that from the friction, the thing is way to strong as you kind of expect. Somewhere near the 2nd arrow was kind of the sweet spot but there is some versatility here. As he moves deeper than the 2nd arrow, the preferable line is to tuck the breakpoint as well as it still won’t generate enough backend motion to hit. However, with this shape he got a nice rounded shape with some room but also the miss in room. So once you know where your error room with a given ball is, you can cheat there with it and increase your opportunity for scores.

Final Thoughts
The comparison video will give you a good idea of where this fits. I used to put most of these balls in the specialty category but now the specialty category is getting quite varied. If you like these type of shapes, then you really could put them in my standard categories. So you could go strong control with the Carbide Tank, Mid Control with the Blue Tank. For those that are onto this craze, there is an interesting simplicity about these smoother shapes that is quite attractive and enticing.

Motiv Carbide Tank vs 900 Global Zen U
The Carbide Tank and Zen U have been newly released and it makes me wonder if this was some sort of coincidence or not. Let’s start with what these 2 balls are. These are strong balls that bely their claim of urethane or the urethane-like microcell polymer. I would like to come up with a more generic name for these type of shapes but suffice it to say, these are easily head to head competitors as you can see from the videos. I’m starting to feel like along with the 6-ball arsenal recommendations, I could easily add a 3rd and separate 3 ball bag for these shapes. The Carbide Tank and Zen U would fit right at the top of that. If they were going to fit in the standard bag, these could potentially take the place of a strong control to mid control.
Directly comparing them, they are the same strength. I mean seemingly identical. Where they separate a bit is the downlane motion. The Carbide is a touch earlier and smoother. The Zen U gets downlane maybe a couple of feet longer and then pops a bit more. This is probably where the 900 Global chemistry of likely adding some reactive component gives it a bit faster of that faster response to friction whereas the MCP is probably a touch “stronger” and so a bit earlier and smoother. But they are very close as you can see. Whether its Tyler or Bryan, we are seeing the same effect. In Bryan’s case it maybe a little harder to see on video but I can point out the slightly better continuation from the Zen U. That doesn’t mean the Zen U is just simply better. The thing is because of that slight extra pop, you also get a smidge less pocket control. You get what you give in a way.
So at the end of the day, you have an interesting choice to make if you’re looking at the Carbide Tank or Zen U but what I can say is truly it’s only just one of these. There is zero reason to consider both for your bag. Good Luck with a very difficult choice.

Motiv Carbide Tank vs 900 Global Zen U vs Motiv Blue Tank vs Hammer Purple Urethane
So here we go again with another volume of the big urethane test. I can’t believe we are at the point where we have so many of these we can do tests for days… or until you destroy the lane, but I digress. Here is this version, we have the Carbide Tank, Zen U, Blue Tank and Purple Hammer. Now I have been saying recently, you could theoretically build a urethane only bag and in that case, you can actually take 3 of these balls. Not to say you won’t be missing something if you had no reactive balls but anyway let’s jump in.
Quickly starting with the Carbide Tank and Zen U, as you’ve hopefully seen from the direct comparison video, these 2 are strong and practically on top of each other. Main difference is the Carbide Tank is a foot or 2 sooner and rounder while the Zen U gets that slight extra pop downlane. So as you can see, whether it’s Tyler or Bryan, they play both balls in exactly the same area. Zen U comes off a little less like urethane than the MCP Carbide Tank. Bottom line is both would fit in the strongest Urethane like reaction part of the bag.
Next up is the Motiv Blue Tank. I don’t think we immediately expected this but there is a very clear distinction in strength between the Blue Tank and either the Carbide Tank or Zen U. In this case, it’s actually a very good thing. For Tyler he is about 8 boards to the right with the Blue Tank and Bryan is about 3-4 boards to the right. Blue Tank just doesn’t have the teeth to cover the same boards as either other ball. But that makes it the perfect mid control type ball.
Now we decided to bring out the Purple Hammer as a bit of a wild card. From the first throw you can kind of see what makes this ball special. Yes it’s urethane. Yes it has a weak core. It is a bit more of the traditional shape in some ways. But with that pearl in it, rather than immediate hook and walk for 30 feet, it reads but is rounder which gives it more shape on lane. Now what is also noticeable is its relative strength. With the other balls, where they play through the fronts also kind of made sense for their backend strength. With the Purple, it shapes a bunch for urethane. So while it can be played close to the Zen U and Carbide Tank area, it always deflected. So you kind of want to find a condition with the volume up front that allows you to take advantage of the boom the Purple Hammer has downlane. That’s why it’s so popular on sport shots.
So finally you could create a bag where the Carbide Tank or Zen U is the strong control U, the Blue Tank is the Mid Control U while the Purple is the Mid Late U. Using the term U to distinguish it from the reactive bag.