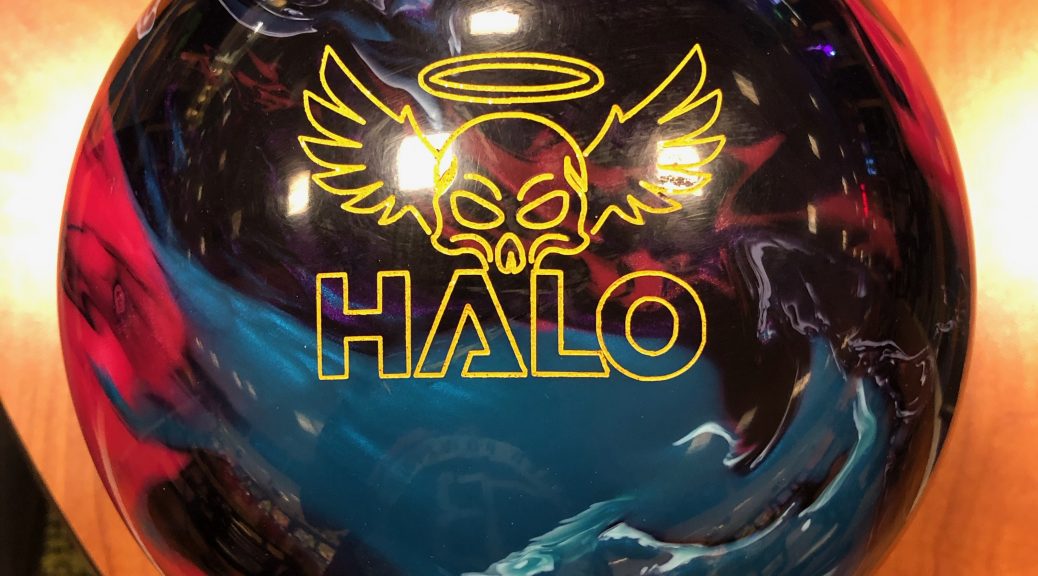 The Halo Pearl Is An Angel… First Impressions
We were expecting to really like the Halo Pearl and in the end, that’s pretty much what happened.

Value
B+
Yeah, yeah. Another pearl asym getting a pretty high score. Nothing new here and Halo Pearl keeps the trend.

Overall
THS: B+
Sport: B+
This was an expected iteration putting a pearl cover on the big core in the Roto Grip lineup. The Halo Pearl is actually a beautiful looking piece. Not to be underestimated is shelf appeal. Familiar formula we have really enjoyed putting those huge cores into clean angular covers. As you would expect, the Halo Pearl gets easy length but it has a smooth heavy roll. The Halo Pearl is smooth and driving while creating enough angle. It’s not as sharp off the end of the pattern the way the Idol Pearl is as the core is turning over earlier and setting a bit quicker, actually smoothing out the shape more.
For Jordan our 2-handed higher rev tester, the ball was simply a beast. He absolutely crushed with it. All I said above came together for a ball that just did the business for him. Clean but forgiving. Just the right amount of hook set to drive through the 8-9 at the back of the deck. With misses out, it still came back to get to the pocket. On misses in, it was a 6-pin instead of some nasty leave. It really opened up the pocket to make him feel comfortable. The Idol Pearl covers a touch less boards but is noticeably more angular. It was a touch over/under for Jordan. Comparing to the No Rules Pearl, the Halo Pearl is more ball overall. The No Rules Pearl is a bit smoother, almost looking a touch lazy compared to the Halo Pearl.
For me, I like the shape. You can see the way the ball is driving through the pins. I had to get in a bit but also pull my breakpoint in a bit as our house shot is just a bit too clean to get bounce from the outside. While watching back I realized I like just about every back row pin. The few times I went through the spot is fundamentally due to the shape of the pattern. With this clean cover, I can open up the angles but I can’t bounce off of outside friction as it’s simply too slick. Nevertheless, when I pulled my breakpoint in a bit, I had a good look. Comparing to the Idol Pearl, it’s very slightly less ball overall but more angular. You can see how continuous it is. Very interesting compliments and shape delta while using the identical coverstock.
Bryan was next and his thoughts were, wow. We’ve seen this before but where Bryan doesn’t always get on with every clean pearl asyms. But with the Halo Pearl, he can play close to the friction, get good length but a strong driving motion. It was very clear to see the downlane motion of the rolly core which had a defined move. Bottom line is he had good reaction and forgiveness. Similar to Jordan, he could miss in and out. Not surprisingly, Idol Pearl looked good being a touch cleaner and rounder down lane.

Sport Shot
We tested on the 39ft Bear pattern. For Jordan he again had a good look and forgiveness. It’s still a strong ball but with the added backend of the sport pattern and he had miss room out. The Idol Pearl was actually stronger here which forced him even further in and was more angular which lost some forgiveness. For me, I really liked the smoothness for a pearl. Pearl asyms have been pretty effective for me on sport patterns as they give me reliable motion that still drives. With the Idol Pearl, I also found it appearing stronger and more angular on this pattern as it stored more energy and came off the spot harder. Forgiveness was out with the Idol Pearl vs in with the Halo Pearl. Bryan found the Halo Pearl a bit too angular for the sport pattern. He liked that it shaped strongly but the pattern is too hot downlane so he had some difficulty finding the pocket.

Final Thoughts
Ultimately it appears Roto Grip has succeeded the pearl asym slot very well with the Halo Pearl. It offers something for each style bowler, no matter 2-hander, tweener, or stroker. We all liked the shape. Jordan and Bryan had very good room on the house shot. I had very good forgiveness on the sport shot. Time will tell if this will make my long-term bag but it’s definitely going to get a hard long look.