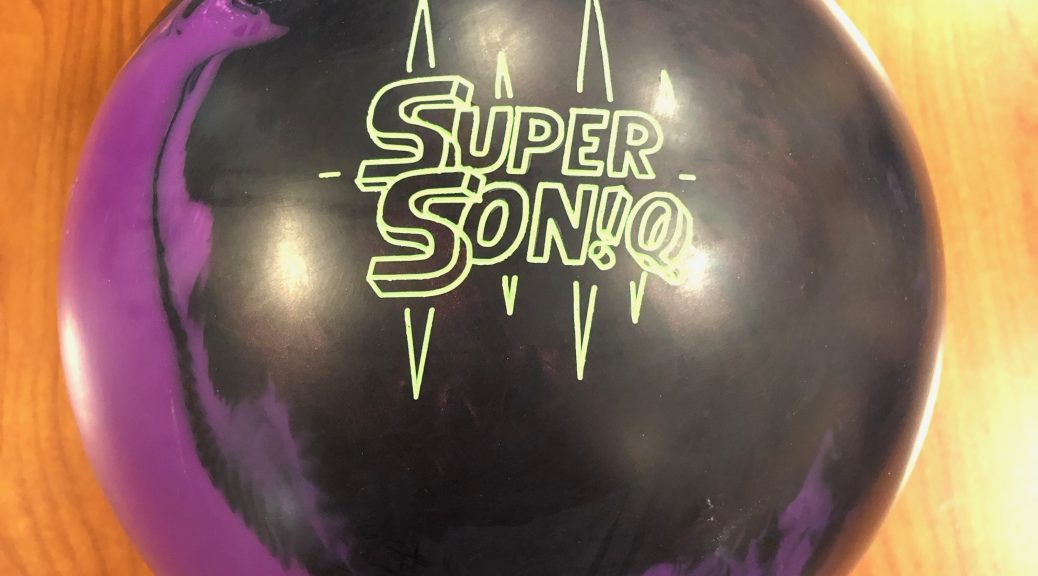 Super Chugs Through the Pins…

Value
B
The Super Soniq is in Storm’s Master line so mid-high priced. It’s going to offer a fair amount of bowlers an option but it is a strong ball that definitely leans towards the higher volume patterns.

Overall
THS: B
Sport: B+
When the Soniq was first released, it had that long and strong ball motion. But even with the angle it generated, I always felt the motor was under-covered. It felt like the core was fighting the cover a bit. Now a lot of bowlers had success with it but many I know found that success once some surface was applied and this made a lot of sense to me. So Storm did what I asked and put the Centripetal HD core inside the much stronger Hybrid NRG cover. So I should be happy right? Well I am.
So what do we have? I called it lumbering in the Soniq review. Some call it chuggy. Chuggy is definitely the right word for the Super Soniq. The cover is aggressive as is the core so I had to move deep enough so it doesn’t read very early. Once I got deep enough, the ball looked great. I didn’t have to get so far in that I lost hit. And with the defined traction, I saw really strong motion and drive through the pins. Where I left flat corners with the Soniq, not a chance with the Super. The ball looked so good for me actually. Where this slicker pattern has given me fits occasionally to match up with the right strength ball, the earliness of the cover, chugginess of the core, but still strong “Storm” backend move meant I was striking almost every time once I got deep enough. Quick comparison to the Physix which has the same cover. We saw similar chugginess with a touch more length due to some mild lane shine but the biggest difference is the Physix had a more abrupt asym turnover which felt a little less usable on this house pattern for me.
Jordan was next and he’s our 2-handed tester. Jordan likes to keep his angles as closed as possible, relatively speaking but the Super Soniq’s strength forced him into the 4th arrow. Jordan has a very forward roll as is the case with many 2-handers. He had to get deep enough with the Super Soniq to bleed some of the cover energy in the oil while ensuring he’s not so deep the ball quits. Jordan had a very good look with the Super Soniq as it definitely stored enough energy to “make it up the hill”. That heavy end over end roll with the symmetric Centripetal core meant it was continuous enough to carry very well. This is the kind of ball he might use with a bit more volume or longer patterns but he had no problem tossing it on our house shot. Compared to the Physix, he saw a bit sharper hook set motion with the asym core from the same line so it deflected through the pins so he had to go a little straighter to get the continuous high flush look out of the Physix.
Finally Bryan gives the Super Soniq a whirl. This ball is somewhat in the tricky zone for Bryan. The Super Soniq has a strong cover that pushes Bryan away from the outside friction. If he gets too far in, the ball bleeds too much energy. So he has a small window for good hit with the Super Soniq on this pattern. You can see the core’s chugginess, especially as it swirls downlane. With the cover’s aggressiveness, it slows down enough and the core doesn’t seem to quite shape strong enough for Bryan down lane. This would be more effective with a lot more oil through the fronts where he can still play more direct and take advantage of more stored energy. Compared to the Physix, honestly he saw the same thing. The cover is just not matching up to him very well.

Sport Shot
We tested on the 39ft Bear pattern. For me I really liked the shape. I love when a ball has downlane shape where I don’t have to make it shape. You can see how much traction but still retaining power at the pins. I never once felt the ball wasn’t going to turn over which I worried about due to the chugginess but was unwarranted. You can see the Physix was actually a board or so weaker but very nice shape for the pattern. The asym core stops a bit earlier. For Jordan, the Super Soniq is too much ball. Too much surface forces him in deep where carry gets a little iffy with his very forward low tilt roll. When he finally gets into the 5th arrow, you see the shape. The ball was rarely under. For Bryan the ball was similar to the house shot but probably exacerbated because there is more shape overall on this sport pattern which means he has to get even deeper, tightening his line even more.

Final Thoughts
Storm has made their Symmetric lineup more versatile by adding the Super Soniq. The Super Soniq is an interesting piece which will hit the mark for some and be unmatched for others. Personally, I found it match really well with my tweener style. It’s not the easiest thing to get through the fronts so I have to open my angles but luckily the ball turned over well. For Jordan, he’s generally not going to have issues getting the ball to turn over and he had no issues. Does he need this much ball for these patterns? Probably not. For Bryan with his style and tilt, the Super Soniq didn’t really feel versatile enough. This should give you enough information to make a decision if the Super Soniq fits in your arsenal.