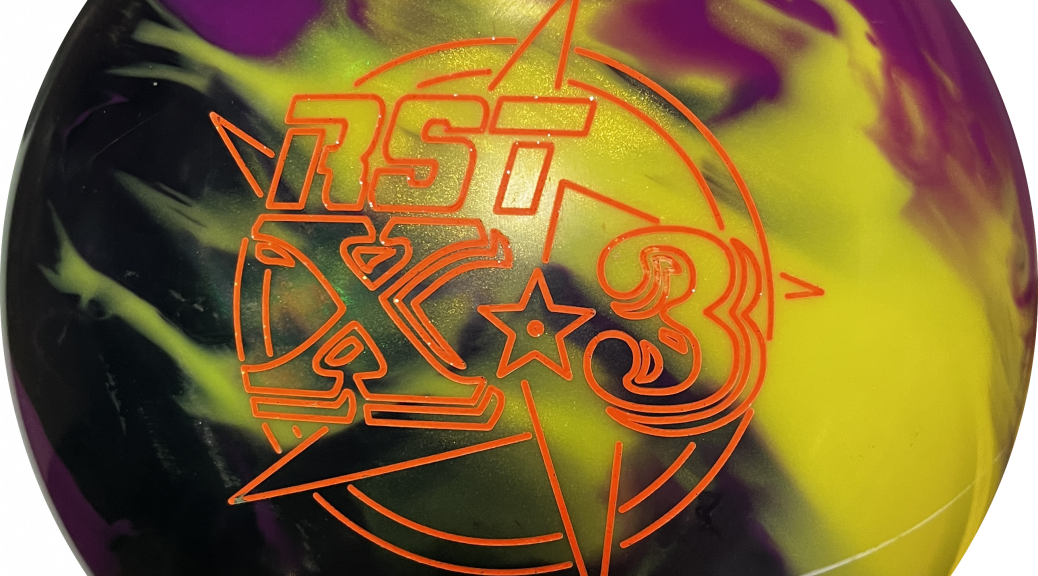 First Impressions
The Roto Grip RST X-3 was a tale of two balls for us. All or nothing comes to mind. Stay tuned to the end for the return of our grading.

Overall
Alright let’s jump right in. The Roto Grip RST X-3 truly confounded me but let me get into what it is objectively and then I’ll share some subjective thoughts. It’s a big asym inside a 2 parts pearl 1 part solid hybrid coverstock. Finish is set to the 4K FAST. The clearest thing I can describe with this ball is a sharp transition. The thing is very hook/set. More hockey stick like than we’ve seen from anything lately. Even with the 4K FAST, it still a very strong ball overall. It’s a big asym so rolls heavy but it transitions hard to hook/set. It has 4K FAST but doesn’t always clear enough. While it’s strong, it sometimes floats oddly in the middle part of the lane where there’s the heavier volume of oil. So that’s where it confused me. This ball really felt like a lot of over/under. For me, it was either all or nothing. When it hooked up, it looked good. When it didn’t, it really didn’t. In fact I wondered if there was something with the pattern but other test balls did not have this characteristic. The objective part is this: The RST X-3 is strong but needs some friction at the right part of the lane because of how hook/set it is. If it seems friction a little early, it’s simply too much. If it saw friction too late, it waited and didn’t look like it had any energy. Not necessarily the kind where it hooked out but rather never gripped. So I had to find a very narrow window on this particular house shot to get it to work and that simply isn’t ideal. Now not every ball needs to be very versatile but this was surprisingly tricky to use.

Here is a quick comparison to the Storm Infinite Physix. For me, the Infinite was king. Very versatile. Strong enough yet clean enough to be a Mid Defined ball. Has that deceptive hook that is just smooth but keeps coming on. In contrast to the RST X-3, it made this house shot look downright easy.

For me personally the Roto Grip RST X-3 is too hook/set but at the same time too finicky. It may be a lefty thing where those type of shapes don’t quite match. Objectively, it’s a stronger Mid Defined hook/set ball. Subjectively, it’s too over/under compared to other balls I have in that slot.

A Power Player’s Perspective
Here is Tyler who is our tester representing power players. What I can say immediately is his reaction was quite contrary to mine. He saw over/over meaning this was simply a massively strong ball that was a bit difficult to get downlane on this medium/light summer house shot pattern. But when he throws it, you can immediately see how hard this ball turns over. The hook/set feature of the RST X-3 is pronounced and obvious. The thing looks like it absolutely wants to run over anything in its way. He just has to try a bit hard to get it down lane. Once he moves deep enough, around 4th arrow and beyond, now he’s got that sharp transition banging the pocket. He still had to be careful but it’s a wheel and deal shape. You have to trust it since there was no chance it would hold. Occasionally he did see a flatter hit but way less often than I did. It was so interesting that we really had the complete opposite reaction between the RST X-3 and Infinite Physix. I can make my Infinite Physix dance from anywhere while no where near that with the X-3 whereas Tyler was the complete opposite, making the X-3 work but less so the Infinite. And it’s not an issue of smoothness. His strong ball in the bag is the OG RST X-1 so a pleasant opportunity to compare directly and you can immediately see while he covers less boards with the X-1, it is so much easier with a smoother blendier shape. The differences to point out. The X-1 has many more games on it. Additionally it is a 2:1 solid to pearl hybrid where was the X-3 is 2 parts pearl, 1 solid. But the X-1 was always smoother so for sure cover finish and chemistry is making the difference here. Ultimately, I think the X-1 is still more versatile but not as huge as the X-3. Keep in mind, this is a medium to medium-light house pattern so it’s possible that getting the X-3 on higher volumes will calm it down a bit.

Stroker’s Stance
Now Bryan is testing the RST X-3. Immediately we can say that Bryan saw a strong ball that was also aggressive at the breakpoint. Historically Bryan will see a more arc shape that Tyler or I, I’d probably say he saw a stronger response downlane than I did. With that said, you would think it would help. However, it did make controlling the breakpoint a little trickier than necessary. When he did get it right, it was explosive and didn’t disappoint. Bryan had to open up the lane more than usual but he also had to get to a relatively small breakpoint window with the correct release and speed. The RST X-3 was fairly release sensitive since it was so sharp at the breakpoint. If he got it a touch left or was grabby, it was high. At the same time, since he had more open angles, if he missed out, it would hit a bit flat. We moved to a lane with a bit more oil and while it opened up the space a touch, it was pretty close. However, the move the RST X-3 made was impressive. Very strong shape. He compared to his Nova and the Nova was earlier and way smoother. You really see the differentiation of the much sharper RST X-3.

Final Thoughts
The Roto Grip RST X-3 fits in the Mid Defined category. It’s definitely on the sharper side but generally I’m not a huge fan of fast responding shapes as they tend to wind up being a bit condition specific. Of note, it’s also on the stronger side of Mid-Defined. It’s important to temper what you see since it’s a view on a particular house shot but the characteristics are clear and I’m confident to say you will see a strong fast responding stronger side Mid Defined ball wherever you bowl.