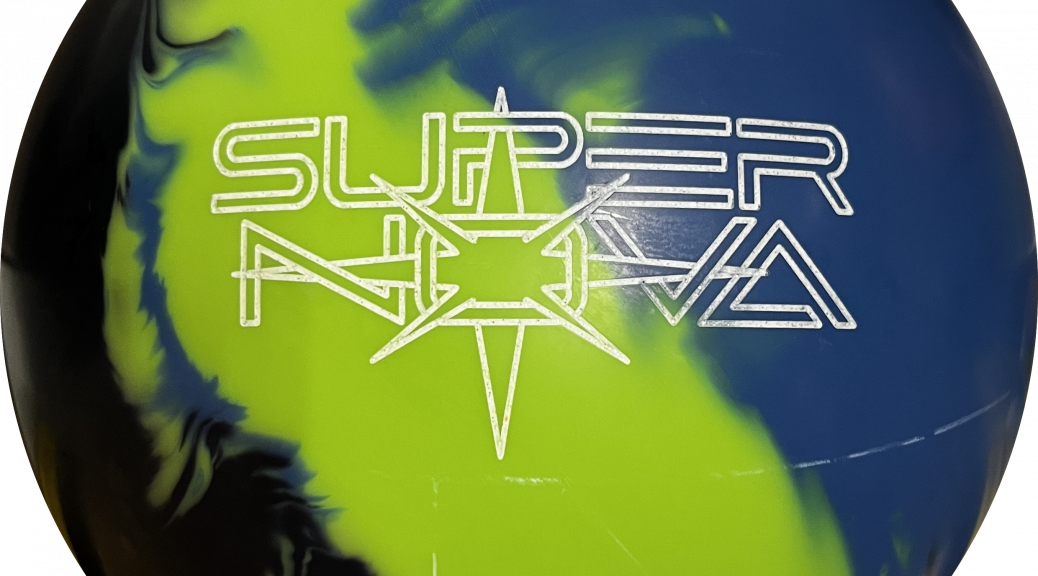 First Impressions
The Storm Super Nova is a very clear relative to the original Nova with more strength but how does it compare to the big dog Proton Physix?

Overall
Alright let’s get into it. We have a huge tumbly rolly core in a strong solid cover. In the Nova review, I kind of alluded to some old school MoRich reference when you look at the size of the core along with the high mass bias. That strength means a ball that spools up quickly. It just wants to do its thing right away. So generically speaking with such a formula, whatever length the cover creates, the core is spooling up. Sometimes they meet up effectively and make a big move. Sometimes they fight each other and the ball could run out of steam. For me with the Super Nova on this pattern, it was 50/50. I felt like it fought itself quite a bit but then did also carry quite well. Most of the time the move was quite smooth and even. So I didn’t quite see that heavy turn in the transition I would see from many big asyms. However, it seemed to impart a good energy to the pins to carry even hald pocket hits. I say to the pins because I really didn’t see it through the pins. The 2000 surface also doesn’t look very aggressive. Perhaps it might be 3500 under a scan. So length wasn’t much of an issue. But I didn’t get the boom either. I got a pretty smooth arc.

I want to spend a little time comparing it to the Proton Physix as theoretically they both are strong defined balls. They have the same NeX solid cover with the same coverstock finish. They have about the same RG and about the same differential. The mass bias is a little higher on the Super Nova. I feel like the Atomic core is sometimes a bit particular in terms of bowler style and effectiveness. In a way I feel like the Ignition core may be a little more “generic” or consistent from bowler to bowler. However, as you will see here, the Proton Physix is an intensely different experience and ball for me. The Proton revs up and explodes to the right. It’s like the Ignition core has kind of started already so the move doesn’t feel anywhere near as aggressive. Honestly, I came into this thinking about whether the Super Nova intended to replace the Proton. For me, they are more compliments than replacements. It’s to the point for me that the Proton Physix is the clear Strong Defined while the Super Nova is a clear Strong Control based on how it rolls for me.

Final Thoughts
So rounding this out, the Storm Super Nova for me is a strong ball yes. However, it simply isn’t defined enough to fit in that slot in the bag. So I have to put it in Strong Control for me if I were to keep it in the bag. Now I will say that the Super Nova reminds me that a ball doesn’t always fit in the same category for each bowler. If you check out the other videos with Tyler and Bryan, you will see that it definitely fits somewhere else for them. Bottom line is for me, it was a strong ball that isn’t too hard to get to push downlane, which imparts a good amount of energy to the pins if I keep the angles on the closed side.

Stroker’s Stance
Bryan is testing the Storm Super Nova. Hopefully you’ve seen the initial video where I gave you my perspective as a tweener. Bryan honestly had a pretty differenet story. We talked about the Super Nova having a strong cover and strong core and for me that combination yielded a smoother ball motion. For Bryan, this was a revelation. He was able to get it downlane with reasonable length but saw a clear more defined move off the spot. He started around the 2nd arrow which is the typical area for him on this house shot and it looked good. Tugs in didn’t hold. The Super Nova was rolling heavy and he could tell he would likely have more room if he moved in. He moved to around 13 at the arrows and it continued to look great for him. Again, the ball would get down lane enough and then really make a strong defined move with a heavy roll and angle. The big difference between what I saw and what Bryan saw was the angle the ball created for him off the spot. He really got a more explosive reaction which is very clearly visible. So anyway, he continued marching in to the 3rd arrow, and guess what, it looked great from there as well. Of course on balance, every time Bryan made a move, he had to be in the right zone front to back. In other words, he made some 3 and 2 or parallel moves just to avoid the huge boomerang angles. The ball still won’t quite make it back from the heavy friction as it clearly uses up too much energy. You can see how much more responsive 15 to 9 is vs 15 to 6. So misses out really for the most part were not it. Misses in generally also went high. That might make it sound like he didn’t have miss room but I would say that isn’t really true. He had a decent window to throw the ball. It was just too strong to hold from big misses in or recover from big misses out. The bottom line is that Bryan struck a lot with the Super Nova having no trouble whatsoever.

To compare to the original Storm Nova, we moved over to a fresh lane. Just for context, you can see that 15 to 8 is still working here. You can just feel that the pattern is fresh. The OG Nova has become a staple in his bag so the Super Nova piqued his interest. Of course his eyes lit up immediately upon throwing the Super Nova but back to the comparison, you can immediately see that the Nova is maybe somewhat oddly earlier and smoother. From day one, the Nova was always very smooth, never really a ball that was a coast to coast type. Too much core. So while the Nova was ultimately in a similar zone to the Super Nova, you can see that it is less punchy than the Super. He could go through the same point at the arrows, but had to move the breakpoint in to get the punch with the Nova. The Super Nova simply was a stronger ball with a stronger back end move. So theoretically the Super Nova could replace his Lock as the Strong Defined while the Nova remains as the Strong Defined minus.

Final Thoughts
The Storm Super Nova was an absolute joy for Bryan. This has a real shot of sticking around in his bag taking the top spot. It made the strong downlane move with overall strength you expect from a Strong Defined ball. It has a good relationship to his original Nova as a step up. The Super Nova definitely ticked all boxes expected for Bryan.

A Power Player’s Perspective
Tyler is back with us testing the Storm Super Nova. I think the video will be pretty self explanatory. So far we talked about my look which was on the smooth side, enough so to move it into the Strong Control slot of the bag. We also say Bryan who clearly saw a Strong Defined ball and an absolute joy to throw. For him, it almost certainly will make it to his bag there, complimenting his Nova. As you will see, Tyler clearly also sees a Strong Defined ball from the Super Nova. This is no question a strong solid but it also has a big move downlane. He recently tested the Roto Grip RST X-3 with us and while that was also a big ball for him, the breakpoint was hard to control given how flippy it behaved. The Super Nova looks pretty strong but straddles the flippy to arcy line a little more which gives him that extra bit of control. That meant an easier time tossing the Super Nova. I will say easier didn’t specifically mean easy. There was still some over under for a couple of reasons. Firstly, it is so strong that he was near the 4th arrow and beyond to find the pocket. So he had to obviously open up the angles. However, as this core is still a bit sensitive to the huge angles, if he got it a touch wide from there, he came in very light. Misses in don’t hold, period. Now again, this is a syndrome of too much ball for the condition for Tyler. It would make a lot more sense on a higher volume pattern. However, we focus our efforts to show you what these balls do for different styles on more typical conditions. If you understand that this is a strong defined ball, essentially a driver in golf terms, it will make sense to pull it out when you are on a par 4 or 5 hole, not a pitch and putt condition. Then you will be able to take advantage of it. For now, Tyler’s strongest ball is still his longer and smoother RST X-1. But the Super Nova doesn’t disappoint in terms of being that big strong defined ball with a heavy roll through the pins.