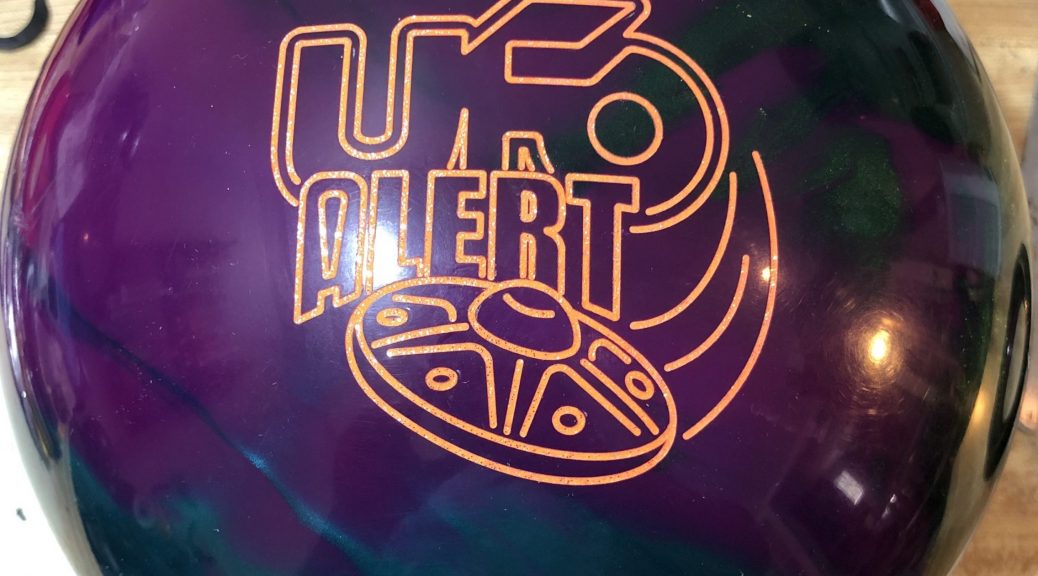 First Impressions
The Roto Grip UFO Alert should be another popular shiny asym from the star brand but will it with the first UFO already discontinued?

Category
This ball fits in the Mid Defined category.

Overall
Here we get the UFO Alert which is a shiny hybrid version of the UFO. The only practical issue I see potentially is that the strong solid version has been discontinued. You don’t typically see a line mate namesake that close to a current discontinuation. Not totally sure what to make of that but Roto Grip does have the RST X-1 and Rubicon as strong asyms so maybe having the UFO is overkill? The RST X-1 is also a hybrid but with 3000 abralon surface. Just goes to show that final surface finish is the most important distinguisher in ball reaction. Anyway, onto the UFO Alert. We tested the Dark Code in the same session and it was clear the UFO Alert is stronger, earlier, and more forward rolling than the Dark Code. You might say, oh, the Dark Code is pearl and this is a hybrid. Again, I look more importantly at final coverstock finish and they are both 1500-grit abralon. The UFO Alert wants to right itself more quickly. That leaves you with a ball that hooks more. It may be more perception of angularity as well but again, rolling earlier means more room to hook a right turn. You can see that it is also playable from direct but that play was easier with the Dark Code. However, once in the track and beyond, the UFO Alert was happier. Easier to use and more forgiving. Now I was able to leak it out to the friction and see that response. It likes to rev up. Still the further I moved in beyond that, the more it got finicky if I didn’t hit it just right. With that said, it’s probably one of those, break the factory polish to get a more consistent reaction. As I did with the Dark Code, I compare it to the Parallax Effect. The Effect is a “pearl” for what it’s worth yet still responded noticeably sooner than the UFO Alert. Again, proving that the coverstock nomenclature is directional, not absolute. Parallax Effect was much harder to use more direct because if how hard it wants to go off the dry. From in, it was a more reliable move. Personally, I would just touch the surface on the UFO Alert.

Bryan tested the UFO Alert as well. Just as I saw but even more pronounced, the UFO Alert was earlier than the Dark Code. It starts up sooner and rolls up. That meant Bryan saw a more arcing rounded shape which he prefers. He had a good look and this time, more miss room out due to the UFO Alert being stronger and earlier so when it saw friction, it didn’t scoot as many feet as the Dark Code did before transitioning.

Final Thoughts
At the end of the day, this continues to notion that Storm / Roto Grip knows how to make shiny asyms and ones that will work for a lot of bowlers. I really hope the marketing piece isn’t a let down, with people knowing the OG UFO has been discontinued. This is a good ball in it’s own right. I would say it’s likely to be a good fit in the Mid Defined Category for most bowlers.