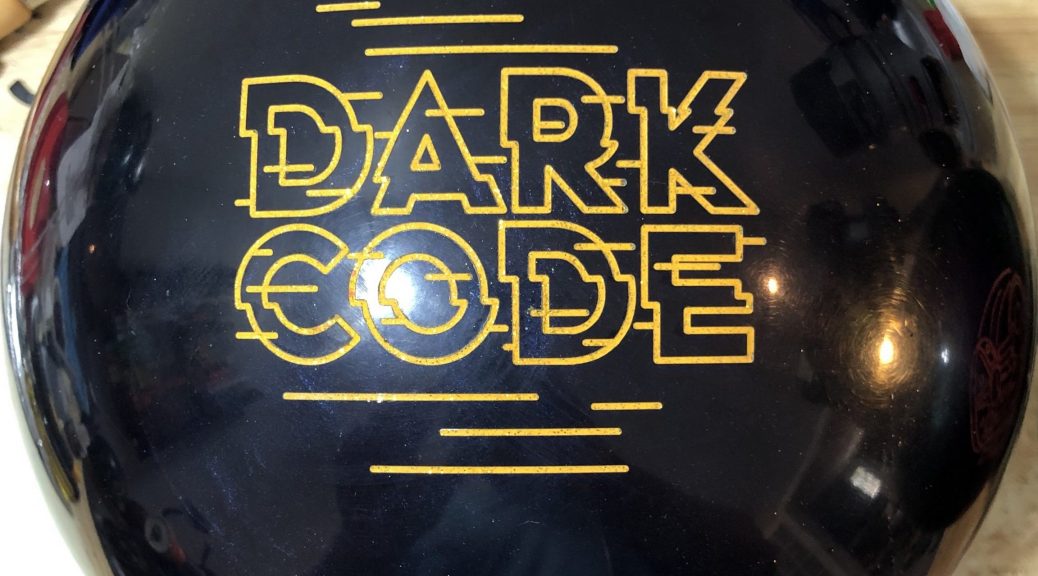 First Impressions
Not too much. Not too little. The Dark Code is juuusstt right.

Category
This ball fits in the Mid Defined or Mid Late category.

Overall
Here’s another Code line ball. The RAD cores have worked well for Storm over the years. The Code Black was extremely popular. That used the typically clean and angular R2S pearl cover. The Dark Code uses the ReX pearl cover. We saw the Nex on the Axiom Pearl. Theoretically you get the clean look of the R2S with a bit of extra traction to blend a bit better. Honestly, that’s exactly what you get with the Dark Code. I will preface that its smart to watch multiple videos as different lane surfaces and patterns will give you different looks as would different style bowlers. We have a pretty typical house shot here, what I would consider walled. The lane beds have some built in track friction and earlier motion in general as compared to HPL for example. That being said, the ball was totally happy from the more direct trajectory on my side as it was getting towards the 3rd arrow. It is “longish” with a very readable transition. You can tickle the friction and get it to smoothly bounce. I could continue moving in and you can see the shape. What I found interesting was that it didn’t respond very hard to the outside friction. Debating if that’s good or bad. I think that formula that doesn’t just stop when it sees friction means you can actually play closer to the house shot friction without the major punishment you might get from a sharper response shape. At the same time, you might not get the forgiveness of the big miss. That’s a virtue love it or hate it, from a bit stronger coverstock formula. It’s the kind of shape that I might actually slot in the mid late part of my bag as it doesn’t behave early or strong enough for me to fit the mid defined. The Nuclear Cell or Snap Lock is that type of stronger fit. But more relevant comparison currently would be the Parallax Effect. Flat out, the Effect is earlier by a lot and also stands up harder. All that makes it look sharper but ultimately it’s stronger and more forward. I felt like from more open angles, the Effect gave me more forgiveness. I also did a quick comparo to the Trident Horizon. Comparing different brands can highlight big differences. Seeing these 2 highlights exactly why mixing 2 brands can be tricky. The Horizon looks rolly and slower to transition. It’s not really slower per se. It feels stronger as in, almost feels like more of a solid cover stock type response as opposed to what feels hyper clean on the Storm piece. That is because the hybrid coverstock gives some sooner read. The Horizon is a pretty blendy piece and I think the Dark Code is as well but lower in the ball strength chart if you will.

Bryan was next and ultimately he had a very similar look. As you know by now our games and styles are quite a bit different. Having multiple testers gives us a better idea of how a ball responds to different styles. The Dark Code does it’s thing for both of us. Even with the higher axis tilt, the ball still has the longish pretty clean look with a relatively smooth strong arc. That gave him some decent room. He’s going through around 9 at the arrows and he had a couple of boards swing room. There was a decent amount of hold but it’s limited by the pretty direct trajectories. The interesting thing again is that because of that inherent strength, the ball really didn’t bounce hard off the friction so misses to the outside didn’t give him the bounce back to the pocket he hoped he would have. So there was a nice window with some limitations. The lane did transition relatively quickly even though it’s fresh and at that point he had to move further right to find the same hit to the pins. You will see in a future video how this looks compared to the UFO Alert. That ball is clearly a bit earlier and stronger. He also compared to his Phaze III. The Phaze III has the same length but a visibly stronger down lane response. So then the question is, when would the Dark Code come into play if he already has the Phaze III in the arsenal? That’s actually somewhat unclear.

Final Thoughts
At the end of the day, I think the Storm Dark Code will be immensely popular. It’s a Code ball. It’s clean. It’s strong enough to deal with most house shots. It’s angular enough to give people shape they want to see. It’s smooth enough to be useful on some sport shots. Some maybe a little surprised it doesn’t bang down lane like the AstroPhysix or Phaze III or even the UC2 for that matter. And people may perceive that as weaker. Ultimately it is unique from those so have a look at what we saw and some other reviews to figure out where it might fit for you.