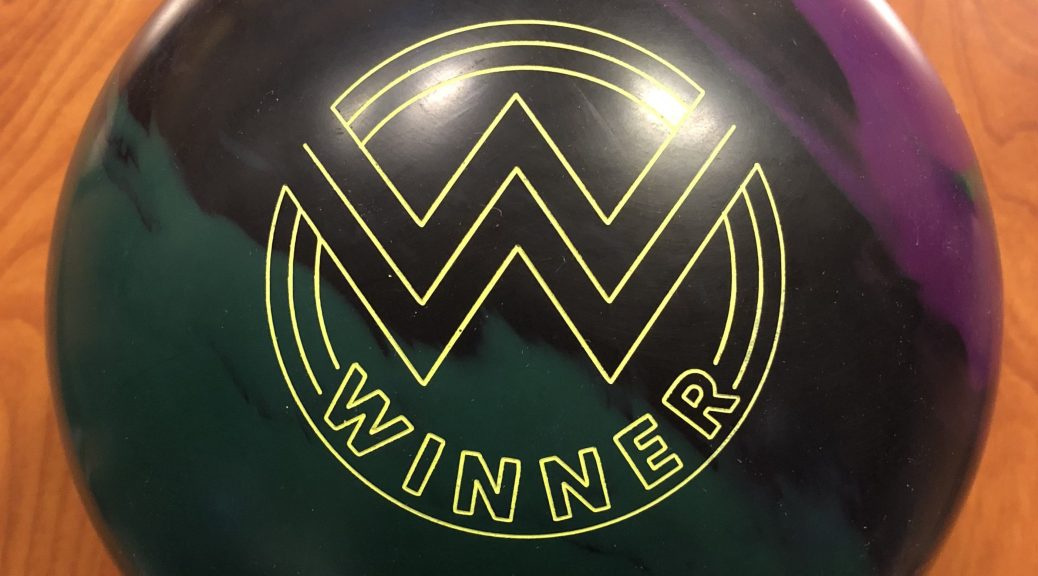 The Winner Gets Some Teeth… Thanks to Jeff Smith and Pure It Bowling for drilling our equipment.
Buy the Roto Grip Winner Solid at PureItBowling.com
Thanks to Limerick Bowl in Limerick, PA.

Value
A+
I don’t know how I couldn’t give the Winner Solid top marks. It performs like a performance ball with as cheap entry as you can get.

Overall
THS: B+
Sport: B
From the first ball thrown you can tell Roto Grip did an amazing job of matching this new cover to the core to maintain the same aggressive downlane shape the Winner had. The difference of course is that you will get less wiggle in oil with the solid cover at 3000 vs the pearl polished. If you recall we really liked the Winner for house shot as it got good length with some level of midlane read while being huge downlane. Not only that, it generated the type of angle for each bowler that just seemed to carry so well. The Winner Solid definitely is in the same mold. It still gets reasonable length with the solid, albeit not as easily as a shiny piece but it still peels downlane. Initially, I really didn’t feel like I lost anything to the Winner but gained some traction to blend the massive house wall. With that said, it was a little easier to leave corners as it does slow down a bit more and just not quite as sharp as the Winner. So for the ones where it saves you from a bucket or washout, it gives you a corner. Seems like a fair trade. If I pinched it in though, I joined the 4 count club. Comparing to the Winner, you can easily see the cleaner and sharper reaction. The big ticket is that these are clearly related siblings whereas the Idol and Idol Pearl felt much more like distant cousins.

Next was Bryan and he was also immediately impressed with the backend movement. The ball reads and the core is angular. He got comfortable quick and could bounce this off the dry boards and still get good drive. The ball read the oil so wasn’t a problem from in. However, like me, he found misses out more forgiving than misses in. Due to the angularity and shape, the ball drives back and it’s less punishing from misses out since it will make it’s way back to the pocket. Misses in don’t hold well as the cover is strong and once the core starts up, it just dives. Misses out early into the friction does the same. Long story short, he felt very comfortable throwing this piece as it generates the backend reaction that helps his game to increase carry. Comparing to the Winner, while it’s similar, he doesn’t get the same angularity but that’s really because he’s a little deeper and it floats longer. Once he moves right enough and the ball sees enough friction, then you see the very angular shape. Trouble is the Winner puts him into that very high friction zone but not strong enough to get in so the Winner Solid is the perfect match up.

Sport Shot
We tested on the 40ft PBA Don Johnson pattern. First instinct was this ball might be too angular but it is a solid after all. First pitch off camera from the same line as the Idol went through the face. So I moved excessively to pocket 7-10 but at least now I saw the shape. 16-6 was 1 board or so too much. So a 2-1 move left and the ball is right in the pocket. It actually controlled the pocket nicely. I did leave a couple of 7 pins but truth be told, that’s actually a testament to the ball’s pocket control as those were slight misses to the outside and this is a sport shot after all.
For Bryan, the Winner Solid again offered very good pocket control on this pattern. It responds to friction at the right time to slow it down enough to get to the pocket from out. It had good shape. Still have to be careful with misses in as it dives through the face if you do. All in all, this gave Bryan a very good look. With the Winner, he could actually stay on the same line but the pinch in is better as the ball holds and you don’t have a flooded high ratio pattern so on the sport pattern, the pattern helps the ball drive more here. It looked quite good actually, considering a “flippy” shiny pearl is not what you’re typically after on a fresh sport shot.

Final Thoughts
The Winner Solid impressed. It is hugely capable, and given the price point, it’s a no-brainer for Roto fans. Price to play is so inexpensive, frankly it’s ridiculous. And having the Winner and Winner Solid having such a nice relationship makes them an excellent buy together for an arsenal. Sure if you are a tournament bowler, you will want different shapes, strengths, etc. but you get a ton with these 2 balls for the price of maybe one high end piece. I could nitpick things but what’s the point. You will get more than your money’s worth out of these pieces.