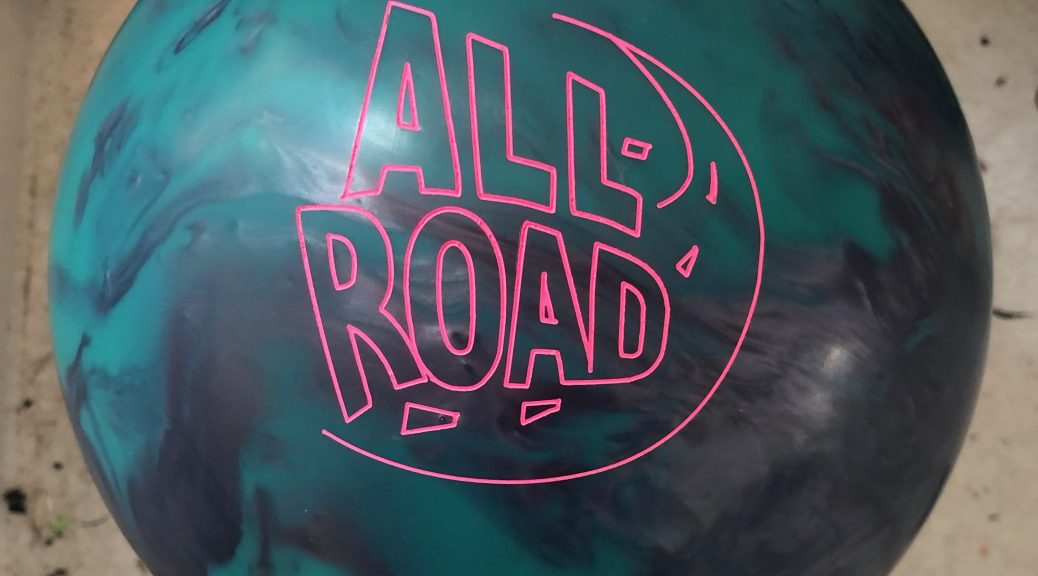 First Impressions
You feel it churn with good front and midlane control while still having a good rounded backend shape. The Allroad looks like a legit benchmark.

Thanks to Jeff Smith and Pure It Bowling for drilling our equipment.
Buy the Storm All-Road at PureItBowling.com.
Thanks to Limerick Bowl in Limerick, PA.

Value
A
HyRoads have always been great benchmark pieces. While there has been ups and downs related to various coverstock combos, this ones just seems to work making this piece high value in my eyes.

Overall
THS: A-
Sport: B
Getting right to it, I really liked the All-Road. The Inverted Fe2 core has been very successful. It has decent length while not feeling too long. It has a rounded boomy move downlane. With the NRG hybrid cover, it gets decent length but has really good midlane traction. What that does is smooth out the backend. But it offers supreme control. So it feels strong without feeling like a huge motor is going to force you to cover tons of boards or go sideways. On house I had excellent room and forgiveness. It does generate some angle but smoothly. Miss in and it is the perfect high flush ball. Miss out is less forgiving but still very readable. There is a definite limit to the angle the ball can create. You can see when I try to open up the angle a bit more, I promptly 3-7-9. It’s there and then it’s not. However, the space I can play is generally wide enough that I felt supremely comfortable not only hitting the pocket but carrying. Keep the angles a bit shallower and you will be rewarded much.

Bryan was next and he had a pretty easy time finding the pocket with carry. The thing that was noticeable was that despite the ball leaving the deck in all different ways, it struck quite often. There just seemed to be good energy at the pins. Bryan has wanted to like the Hyroads over the years but has found limited use as they play relatively weak for him and are a bit niche. He wasn’t expecting much given that background as well as finding the NRG hybrid covered balls Physix and Super Soniq just too much traction with not enough punch. With that said, he was pleasantly surprised to have a pretty good look. He felt like it was “weaker” than he anticipated from previous experience with this cover which meant being more direct. However, the cover to core combo seemed quite effective allowing him to be more direct, taking advantage of angle through the pins. He also saw that tug in would hold and carry. Additionally, he tried the slow looper bouncing it out to the friction and the ball recovered again working well. All good things really.
Bryan used the phrase, “it’s not fancy but knocks down all 10 pins”.

Sport Shot
We also ran a quick battery of testing on the 36ft 2019 PBA Viper pattern. This is a heavier volume pattern which means you need some teeth through the fronts but some down lane angle control. What was interesting is that the ball was quite angular down lane on this pattern for me. So while it really didn’t struggle to feel like it had traction through the heavy volume in the front, it also had lots of downlane angle. I can see this ball working better on sport patterns that are a medium or longer where you won’t feel like it quits but still offers control. For Bryan he was probably as comfortable as you could get on this tough pretty flat pattern. Not that it’s easy but it offered reasonable control allowing him to be straight through the lane with a smooth arc. Just a quick comparison shows how much less controlled the original HyRoad was. Similar shape but more over/under.

Final Thoughts
In the end this looks like it’s going to be a very versatile piece. This is the perfect type of ball to cover that over/under wall that’s now seemingly the standard for house shots. It has enough traction to be used in the oil. It has enough smoothness that you can keep your angles more closed. Play this one more directly, relative to your game and you will be rewarded with excellent pocket control and pretty good carry.