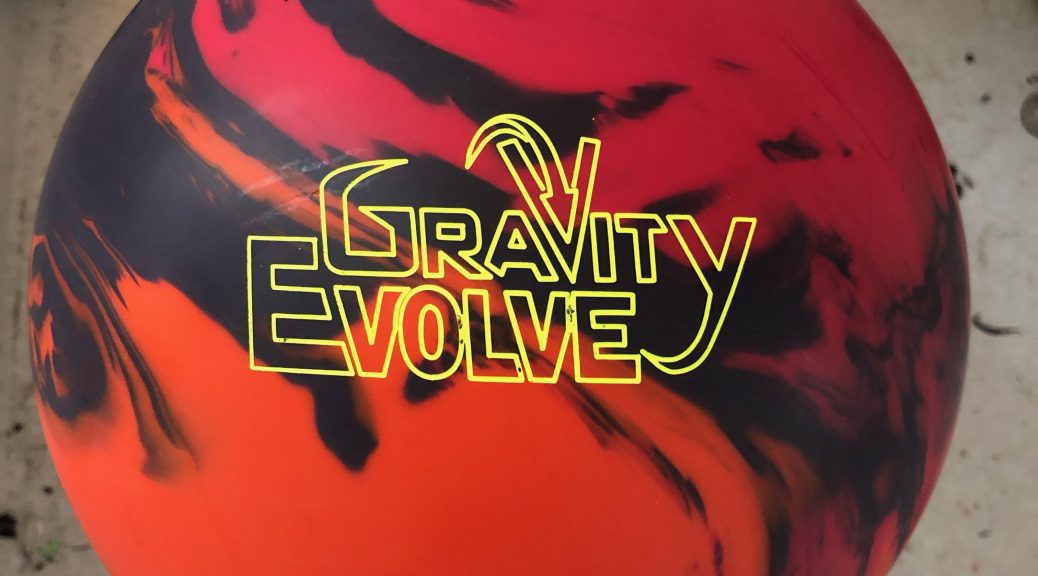 First Impressions
I recognize the Gravity core. In practical today terms, the Evolve reminds me very much of the Crux Prime but even more forward rolling.

Thanks to Jeff Smith and Pure It Bowling for drilling our equipment.
Buy the Storm Gravity Evolve at PureItBowling.com.
Thanks to Limerick Bowl in Limerick, PA.

Value
C+
This ball has the premium of the top line balls and doesn’t immediately feel like the most versatile piece.

Overall
THS: B
Sport: B+
Storm continues with the SPEC cover, this time in the venerable Shape-Lock HD core. I will say that I do enjoy this core very much. But for me, the cover took a bit of that backend bite away. That quicker response Storm is knowns for is not available with the SPEC cover. With that being said, perhaps the idea is to offer both quick and slow response balls to make the Storm lineup more versatile. The Physix is still around at the upper end.
I’m used to that forward heavy roll from the previous Gravity balls but also combined with more response to friction to make it a great ball. That slower response cover means less backend for me so I have to be more direct, even more so than the Allroad on house. When you combine an earlier roll with smoother downlane response, you get less motion overall. That’s not necessarily a bad thing but it is the characteristic you need to understand about the Evolve. It wasn’t hard at all to find the pocket. But I do find the SPEC cover to make these balls a lot more speed sensitive. If I want angle I have to slow it down. If I target for “angle” and get just a touch fast, it has no chance to corner. That slowness downlane means you play to that shape. Tricking it just doesn’t seem very effective unless that’s your A game. Compared to the Pro-Motion, it just seems that core shape matches the cover to allow for big angle. So it seems smooth instead of slow if that makes sense.

Let me introduce James Kniffen as our high rev power tester for the Evolve. You will immediately see that power players can overpower the pins and take advantage of that smoother slower response. James really straps on the ball and with that he really gets that heavy rolling core turning over. So while he strikes a ton, even when he doesn’t “get it all”, his speed and rev rate means slapping out the 10 via slow 6 pin or massive messengers the average bowler doesn’t get. You see how smooth the ball is especially with the 2 pins he left being a little too deep. James compares to his Physix and what he felt was that they are pretty close in overall shape but the Evolve goes through the pins less consistently than the Physix. Again, I see that due to more responsiveness of the more traditional non-SPEC cover. As you watch a few of his shots with the Physix, you will actually see some over/under so in this case, the Physix was too much ball and driving a bit too hard downlane and hence the Evolve was actually the better look. So while it comes off the spot more consistently, it was a bit too much ball for the pattern.

Finally Bryan tests and again for him, he had to be more direct with the Evolve than the Allroad. That earlier roll and smooth reaction meant the same for me, less board coverage. However, when he got to the spot, just like I did, we took advantage of that heavy forward roll for good motion through the pins. He was surprised he could be so on top of the friction and still get motion. Usually the reactive balls are too responsive straight in that friction. Where Bryan felt the ball came alive was that slow wheel. Like I mentioned, if you slow it down, the ball will respond for sure. And now you can see it being able to not only generate angle but drive heavy. So moving about an arrow deeper, even with that amount of surface, he can float the ball with an open launch angle and watch it just transition and drive so nicely. So again, if that’s your A game, you will likely be rewarded with great carry.

Sport Shot
We had a chance to test on the 36ft 2019 PBA Viper Pattern. This was an interesting juxtaposition. Whereas the Allroad was a bit jumpy downlane, the bigger Gravity Evolve with the SPEC was so smooth it makes it a reasonable look on Viper. With the earlier chugginess and smooth motion downlane, this is probably the ball I would want to use on this higher volume shorter patterns. Control, control, control.
For Bryan, it was actually similar. From more direct it was a bit of the thread the needle. Once he paralleled left, in other words, catch more oil in the fronts and use less angle down lane, it looked great. On a pretty tough flat pattern, he felt this gave him a touch of room he really didn’t have with hardly any other option.

Final Thoughts
I’m still trying to absorb the SPEC cover as it relates to the general Storm/Roto lineup. In the end, it is crystal clear to me that SPEC is a much slower response cover downlane. This bodes well for control. So when you want to be more direct than an equivalently motored non-SPEC ball, the SPEC will always make more sense on tough patterns. When you want more miss room side to side, especially on house, it really has to be the right condition and time to take it out. If you have slower ball speed, this ball can definitely generate more angle while staying smooth.
Bottom line, while this maybe a bit of an overlap with the other Storm big pieces like the Crux Prime and Physix, you have to watch carefully and decide if this motion fits in your bag.