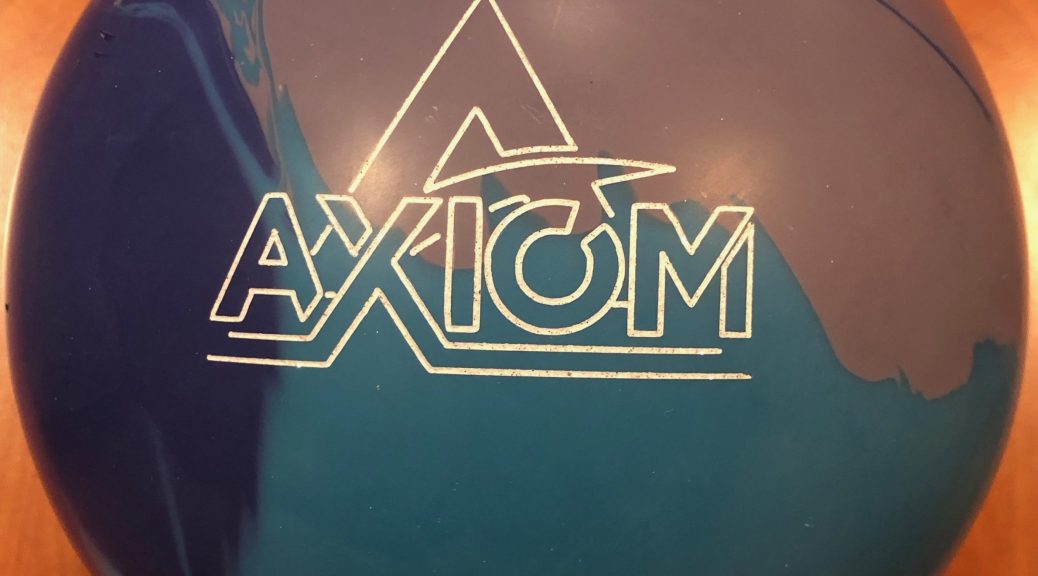 First Impressions
Huge surface, huge core. And it still goes sideways off of friction. In the words of Chris Berman, Rumbling, Bumbling, Stumbling.

Overall
I don’t mean to sound derogatory with the Berman bit but the Axiom just has that extremely dusty look and smooth motion. Looks more than 3000 out of box to be frank. Honestly it rolls like it’s 1000. So enough about that, bottom line is that due to the aggressive cover, it picks up and goes, no question. It’s going to read the lane. The interesting bit is the more you get it into the friction, the harder it moves. Seems logical but many big pieces just labor when they see too much friction. This thing stands up and goes. So to some extent I can understand what Storm says about their NeX gen Nano cover. It is definitely capable of generating strong angles. One of the challenges on this medium/medium high volume is that I really don’t need this much ball. Great pocket control but I left some flat 7s. If I hit it right, great looking strike every time. If I missed it a bit, I could call a flat 7. Just needed to work it more than I would like to carry which tells me it’s a touch too much ball for the pattern. I really see this ball like a symmetric UFO. They are pretty similar in ball motion. Pocket control is not a bad trait to have. The way it responds to friction will give it a leg up on some other big pieces that die in friction.

Sean was next. Here you can see the motion with a higher rev rate. The ball is strong but it certainly didn’t feel unusable by any means. It was actually quite angular in his hands. You can see it rev up and then make a huge move. Again, what is noticeable is that despite that aggressive out of box surface, the Axiom still responds strongly to friction. So it again doesn’t feel like the big surface ball that pukes in too much friction It just would hook too much. Honestly, I prefer that motion. It confuses us bowlers when a strong ball pukes in friction. I much prefer less friction less hook, more friction more hook vs less friction less hook, just the perfect amount right hook, and high friction puke. For Sean he had a touch less forgiveness than I from misses in due to his rev rate. You can also see that he can wheel it and it is very capable of creating angle so you aren’t worried about it straightening out too much in the roll phase.

For Bryan, he gets a smoother roll than Sean and I, more banana shape overall. You can still see the same characteristics of the ball just on a smaller scale. It didn’t feel as strong for him as say a Lock or other big asym but it’s a step-down as you would expect where you still need traction but not as big of a ball overall. Generally Bryan had a really good look. Here you can see how the ball shapes going down and in. It never felt jumpy. The Axiom has a nice smooth shape throughout the lane. Bryan had probably a touch more miss room in than out due to the way he shapes the ball combined with the balls characteristics. But it was quite easy to control the pocket and carry percentage was quite high for him.

Sport Shot
I tested on the 2019 40ft PBA Don Johnson pattern, what was used on the TOC this year. It almost looked like child’s play in terms of pocket control with this ball. In that regard, even more so than the Phaze II. It made me comfortable and I threw a lot of good shots. It rolled so good and generated just the right angle to carry quite well. If I was a touch too deep, it still gave me excellent pocket control but a ring 7. I’ll take that shape on this tough medium length pattern any day. You can see the Phaze II doesn’t look far off at all. If anything I would say the Phaze II is a bit sharper off the end of the pattern in terms of transition.

For Sean, the Axiom made this pattern look pretty easy. He can use the outside which has tended to be out of bounds and just use the strength of the ball to shape and do its thing. He tried a few shots from a bit deeper but honestly he never felt like he needed to step inside and risk giving up the pocket when the outside looked so good. We hadn’t seen a ball able to control the outside on this pattern previously.

Finally Bryan was up. It was a little trickier in the sense that it let the pattern play as tough as it really is more or less. Because Bryan doesn’t see quite as much shape as Sean and I, the down and in shot on this pattern has to be pretty spot on. The Axiom is strong up front so missing in had him going high. He did seem to be able to move in and still get shape to make it up the hill.

Final Thoughts
I’m giving this ball a A- for value. I also give it a solid B+ for both house and sport shot. The Storm Axiom may wind up garnering higher scores in longer term testing but the initial look is very promising. The big takeaway is this is a strong ball that seems to proportionally respond to friction. So it generally doesn’t surprise you with it’s behavior. If it hooks too much it saw too much friction. Miss out to the friction and it stands up hard to recover. Very forgiving while still being a strong ball with good carry. I can see myself replacing my Phaze II with the Axiom in my bag and being totally comfortable with it.