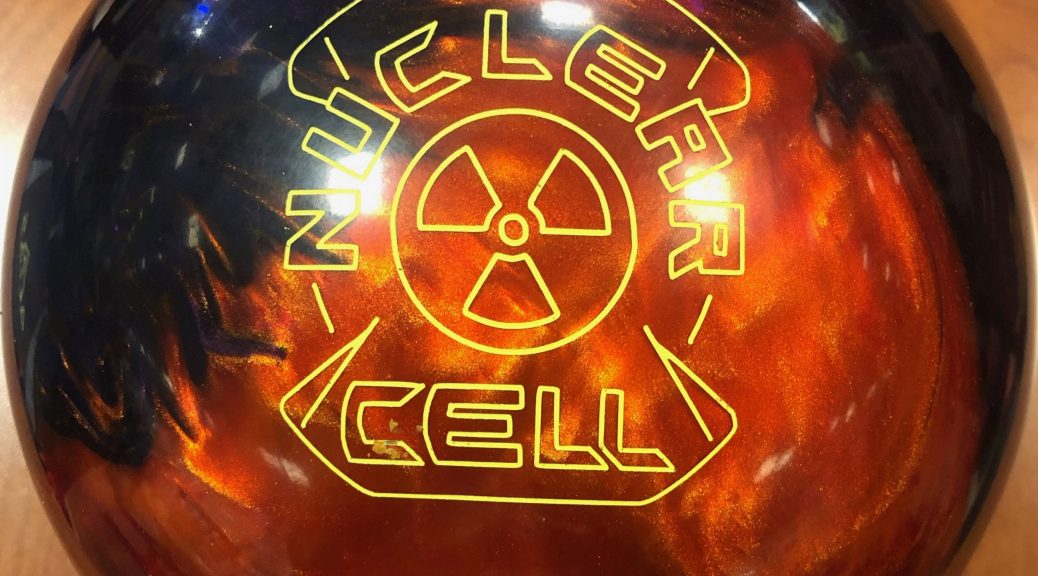 First Impressions
The Nuclear Cell is the quintessential pearl asym and you know we love us some pearl asyms.

Overall
The Nuclear Cell is what you expect. For those that love the Nucleus core motion, it’s back. This is clearly a successful formula so it keeps returning and we keep eating it up. I’m not going to complain. The Hyper Cell Fused went away and another Cell comes in it’s place. This is a very different ball than the other pearl asym, the Halo Pearl. While the Centrum core is particularly forward off the end of the pattern, the Nucleus is rounder and more continuous. Typical Roto Grip pearl asym. Clean and angular, in this case with the added rolliness of the Nucleus core. I’m not a huge fan of factory shine so I took an old 2000 pad and just scuffed it lightly. I struck a lot. It isn’t exactly a throw it direct ball. It’s too angular and comes off the spot hard. So it likes room and more open angles. And it’s capable of chasing deep as need be. The higher the rev rate, the more noticeable that will be. It gave a nice wide pocket. This ball has such a beautiful shape on the lane that it made me comfortable. There’s room to miss out. Missing in is fairly reasonable room considering the type of ball which is a testament to the core shape. Of note, I started with OOB surface and I wasn’t really very happy. I saw my share of corners and totally unnecessary over/under. I’m showing the shots here so you know what I’m talking about. With that, I quickly scuffed it and saw what a great ball the Nuclear Cell is meant to be.

For Sean he saw the typical pearl asym look. The ball again has a beautiful aggressive angular shape. I wouldn’t quite call it skid flip but it sure turns hard and drives. Sean could play near the third arrow pretty naturally on this house pattern and the ball just barrels through the pins. Sometimes it doesn’t look like it deflects at all through the pins. He can also play the more direct line with less axis rotation. All in all a good motion with the same characteristics I described earlier.

For Bryan, as you would expect with his more down and in style, the ball has a similar shape but on a smaller scale. He is playing pretty direct in the 7-8-9 area through the arrows straight down the boards more or less. However you can still see the hooking motion off the end of the pattern. It’s not snappy but visible. You can see that asym hard setting of the motion which isn’t quite as continuous for Bryan as say the Phaze III. Generally Bryan doesn’t use pearl asyms much as it’s a shape that doesn’t quite fit the bag. By the time he’s balled down to a pearl, he prefers the rounder symmetric look of say a Marvel Pearl.

Sport Shot
I tested on the 2019 40ft PBA Don Johnson pattern, what was used on the TOC this year. I found the ball to be reasonably in play. A little more surface would tame a touch of over/under from a shiny ball from the left side but honestly it was more forgiving than you would think.

For Sean it’s similar. You can see that this is not quite matched up with the shinier surface on this heavier volume fresh pattern. We did test after tossing the Axiom to better simulate a little breakdown but it wasn’t enough. The Nuclear is fairly over/under in this scenario. I think it will be a fantastic shape with a little less volume or after just a little more pattern breakdown.

For Bryan it was pretty much the same situation. It’s too clean even after a few games with the Axiom. Bryan didn’t have as much trouble as Sean though because he is used to playing up the boards and this wasn’t jumpy off the end of the pattern. The issue was that it didn’t really drive unless he really punched it directly high flush. He had more miss room in than out.

Final Thoughts
Ultimately I give this ball an A for value and A for house shot. It gets the benefit of the doubt because…well…it’s a Cell. You can determine your score on the sport shot. I can see it come into play for me with surface. In the end, as I said, this is the prototypical pearl asym. When you want clean and angular with that heavy asym roll, as opposed to the later and even more angular Phaze III, the Nuclear Cell is the one. If you are a Roto fan, I can’t see how you don’t want this in the bag.