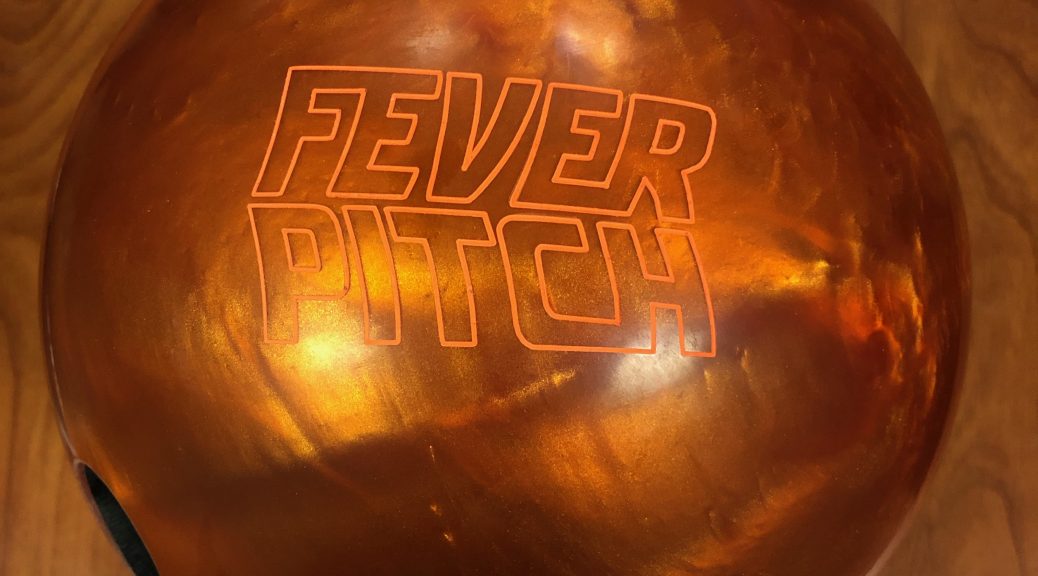 Urethane With The Fever… First Impressions
The Fever Pitch is a the skid flip of urethane.

Thanks to Jeff Smith and Pure It Bowling for drilling our equipment.
Buy the Storm Fever Pitch at PureItBowling.com.
Thanks to Limerick Bowl in Limerick, PA.

Value
C+
Valuing a urethane ball can be very tricky. The Storm Fever Pitch is moderately priced and offers something that will work for some and not for others so your score may vary.

Overall
Sport: C+
Again scoring this ball is very tricky. Like with most urethane balls, they will work for a subset of bowlers and a subset of conditions. We decided to test on the 33 foot Wolf Pattern. This is for all intents and purposes a flat pattern at 1.23:1. We used this pattern as all of our testers can use the Fever Pitch on it.
The short version is this is a snappy urethane, or at least it’s snappy for a urethane ball. Now what I can say is this is a very different look to the traditional urethane. Instead of the typical starting at your feet and walking to the pocket, this pearl urethane gets downlane pretty easily and comes off the spot with strong angle for urethane. Don’t get me wrong, throw it on a normal pattern and you’ll clearly see the urethane in it. But on Wolf, this thing is down right angular and continuous. My first instinct for me from the left side is I like the more traditional roll of urethane like the Hot Cell which I’ve used to very good effect on this pattern. I like the early hook and long roll look of urethane but many will like that it offers something completely different.
I want to introduce Jordan. It seemed apropos to bring on a 2-hander for a urethane test. You can see right away how angular the Fever Pitch can be. You can also still see some of the urethane control where you can open the breakpoint on a flat pattern by a board or 2. Still can’t miss in big or Jordan completely crosses over. This is still a tough flat pattern. Again the extra stored energy made this pretty angular for urethane.

Finally Bryan tests. Obviously he’s going to be playing direct as well. He’s also pointing it up 5. You can see the length and snappier reaction of the Fever Pitch. It’s still a tight line for Bryan but he was able to find it. Tough pattern means tight lines. It’s almost like throwing a entry level reactive ball in that it’s not as aggressive as typical reactive stuff but enough to have good angle. But it’s probably a little less sensitive since it’s finished at 2000 grit so still has some grit instead of reactive that would play cleaner and then over/under off the end of the pattern.

Final Thoughts
Where are we with the Fever Pitch. This is a difficult one. For a 2-hander, this could be a ball that is usable on house or sport shots. They can whack it and still get some forgiveness while creating continuous motion. They will lose some of the forgiveness of the traditional urethane reaction. For a tweener like me this would only come into play on short patterns, 35ft or less. Urethane is very effective for me on these patterns but as a lefty, I prefer the traditional urethane reaction that will hook really early and just roll which gives me more control. I will say I had a pretty good look with the Fever Pitch. For a stroker like Bryan, urethane is not something he typically looks at and I doubt he would consider replacing his low end slot with the Fever Pitch. He’s still going to prefer a ball like the Deep Freeze or Destiny. Nevertheless the Fever Pitch offers something intriguing in the urethane space.

THS Review
Overall
THS: A
Would you believe me if I said I gave a urethane ball an A on our house shot? Well here you go, the rare occurrence. Why? Honestly I was completely taken by surprise. I won’t completely repeat what we said. So if a pure urethane ball started hookin at 25 feet, the Fever Pitch does it at say 35. What that does is allow it to be not only longer but more angular. Clearly this isn’t pure urethane. Ultimately it gives you almost urethane-like control with almost reactive-like down lane reaction. For me, the extra length allows me to play right in the friction on house. Something like the Hot Cell would start at my feet so moves me right and kind of traps me a bit in over/under reaction. The Fever Pitch gave me great forgiveness but hit that I just don’t see from urethane except on the perfect shot. This thing just drives so well through the pins. The score is because I can use it all night and it doesn’t destroy its own line with carrydown. And in terms of longevity, it’s still a sort of urethane type ball so I expect it to be what it is for a long time. Comparing to the Pitch Blue shows you exactly what you would expect. The Pearl gives it just about the same length but you can tell the Pitch Blue arcs more due to the higher urethane content which means it deflects and leaves a flat corner.
With Jordan, our 2-handed tester, he also sees a very good ball reaction. Ultimately he also plays a similar line to me and he sees the same as I did. He had great drive. We also carried the half pockets. What was really nice is you can also miss in and carry with the high hard one. With the Pitch Blue he can also play the same line and you can still see it’s a bit rounder than the Fever Pitch but he had better chance to carry than me due to the increased rev rate.
Finally Bryan tries the Fever Pitch on the house shot. This again wouldn’t be a type of ball he would use. He just doesn’t generate enough motion to take advantage of the urethane motion, even if it isn’t 100% urethane. He could get to the pocket but he had a smaller window. The Pitch Blue also has a minor difference that really doesn’t matter as he wouldn’t use urethane in general with his game.

Final Thoughts
Ultimately, I am very impressed and surprised with the Fever Pitch. I could legitimately use this ball all night on a house shot with minor moves. When your house shot has an over/under cliff around the track, using the Fever Pitch may the the trick you want to bypass that. If you’re a 2 hander, you will benefit from urethane type control with some good downlane motion. I like this one.