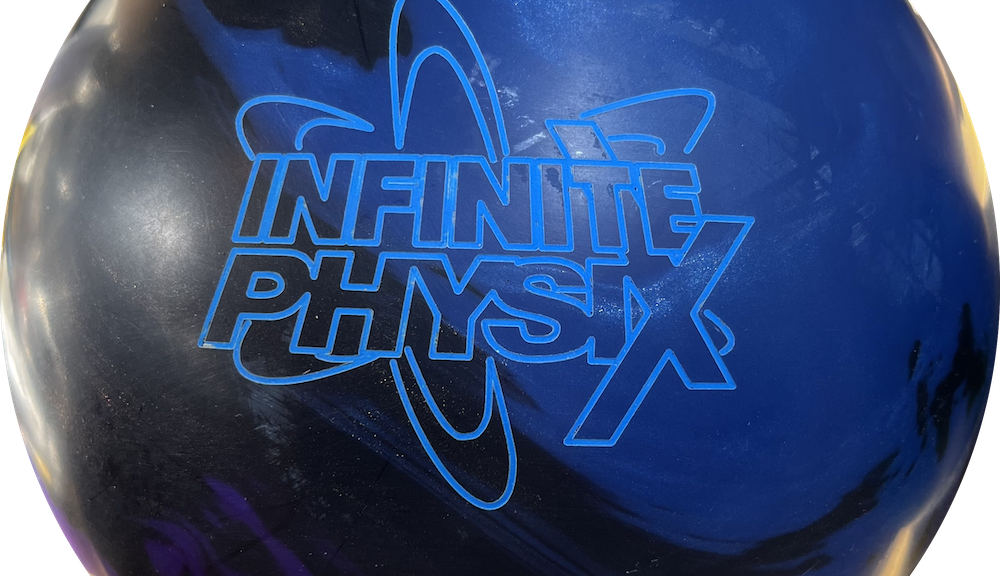 First Impressions
Can I just say the Infinite Physix made such a great first impression, it’s pushing something else out of my bag immediately.

Overall
I kind of spilled the beans in terms of my subjective opinion but let’s get into the objective information about this ball. I wasn’t sure what to expect exactly when I first drilled this ball. It’s a pearl asym but not a “shiny” one per se coming with 4000 abralon OOB. It comes with the ReX cover which is the same as on the Dark Code which pushed that ball down to a Mid Late type ball, i.e., not quite strong enough to fit in the mid defined category you expect a shiny asym to fit. As I step back, this ball reminds me a lot of the original Physix in terms of shape. It has a little less traction but a slightly bigger boom to compensate. In that regard, it is the perfect compliment if the OG were still around. I could play it somewhat direct if I choose to. I could open up the angles quite a bit and it comes back. Honestly the thing that stood out is a trustworthy ball motion. Just throw it half decent and it comes back from wherever. It has good torque down lane. And because of that, I was able to relax and throw it better and better, yielding even better results. Even nosebleed shots where not complete throwaways. The ball did enough to keep you safe. In that regard, I can see this ball being a benchmark type for people because it looks so versatile. And while I may purely slot it in the Mid Defined category, it is a wide ranging coverage type ball for me. As I think about arsenal build of these type of balls, this to me is in the Zen and Zen Soul realm in terms of not necessarily being smack in the middle of an arsenal box but so versatile that they are unquestionably worth having in the bag.

A Power Player’s Perspective
As you have seen in recent videos, Tyler has joined us as the higher rev tester. We noted right away how smooth the Infinite Physix was for him. Just feels like it rolls for days. Yes it clears with ease but it never just says, time to go sideways. It kind of says, ok let’s start walking back to the pocket at a leisurely pace. Again, it never really looked like it wanted to overreact. Just kind of walks and is very easy to read. It’s kind of the way the Dark Code was for me but that one was even cleaner. Here, this is a control motion, almost like an IQ Tour or Web Tour type shape for Tyler. He had to be careful with not to open the angles too much. But the Infinite is an interesting look here and a kind of unique shape to consider.

Stroker’s Stance
For Bryan, he doesn’t usually find a ton of use for balls that fall in this category. You would think the cleaner covers would allow the big motors to store more energy and pop downlane. However, he generally finds a pretty arcy motion which is attributable to his style but what tends to happen with balls like the Infinite Physix is that they either take too long to do anything or he has to get them into the friction so early that they roll out forward and deflect at the pins. However, the Infinite wasn’t doom and gloom for him. That’s just a preface. You see that sometimes, but the clean and smoother nature did allow him to straddle closer to the friction without worrying as much about over under. And given the smoother nature of the NEX cover, he really had a pretty decent look. There really is only one look and that is pretty direct straddling the friction but it really wasn’t a problem because of the forward rolling nature and smoother cover, it didn’t really ever want to overreact. Did it make an impression enough to take over a slot in the bag? Probably not.

Final Thoughts
The Storm Infinite Physix is a no-brainer very versatile Mid Defined ball for the bag. The oob surface finish makes sure it isn’t limited in use do to over/under while the ball itself is so capable in terms of big downlane motion that you don’t feel jipped out of anything putting it there in your bag.