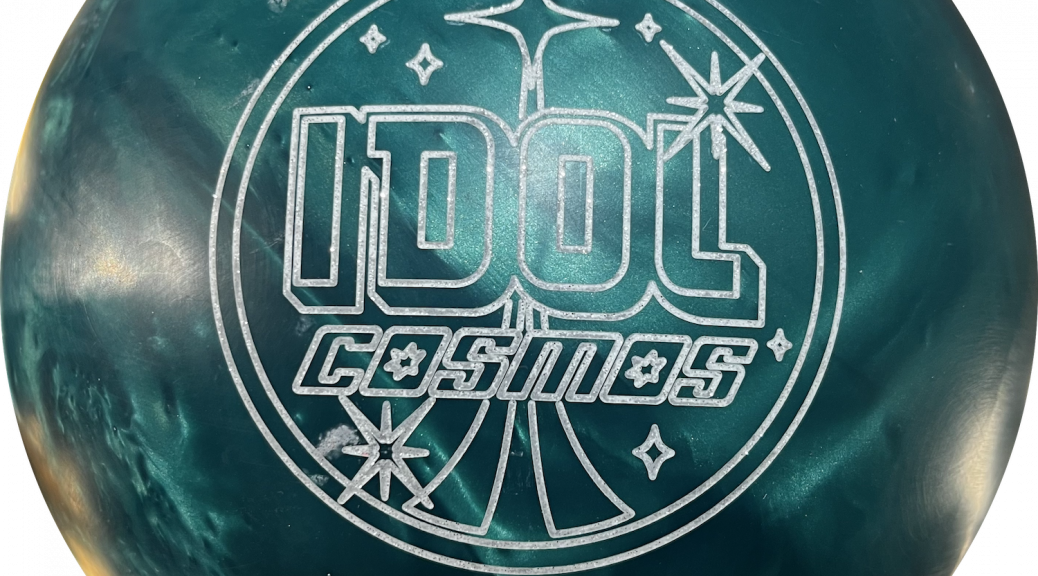 First Impressions
I was hoping for an Idol Pearl replacement but the Roto Grip Idol Cosmos is something entirely different.

Overall
I’ll start off by saying how shocked and somewhat frustrated by how strong the Idol Cosmos was out of the gate. Yes this is a house shot and in the summer, they play even more hooking so I don’t expect to be able to play it direct unless I launch it but I had to move myself quite deep on the lanes for the left side before I could find the right zone. When I said I expected it to be between the Idol Helios and Idol Pearl, it is in the broadest sense but in a different way then I expected. After a lot of frustrating shots trying to find the pocket with the Cosmos, I finally found it beyond the 3rd arrow or very open angles. That should clue you in to the differences I’m talking about. Barring the Idol Pearl, this is more continuous for me than both the Idol, Idol Helios, or Idol Synergy. And in fact, dare I say almost stronger than all 3. The amount of traction this ball generated made it feel way stronger than a 4k abralon pearl should feel. Now truth be told, it’s not stronger than the Helios or OG but this is such a strong ball with a very different shape. It’s like this is the strong version of the Idol Pearl as opposed to a pearl version of the Helios. I think adding the pearl on this cover made it semi-normal as compared to the early read and almost urethane smooth type shape of the Helios. On this house shot, what I can say is I had trouble getting length which made me think this ball is way stronger than a Mid Late. It almost looks like Strong Control but then that would be in the same slot as the Idol Helios. I’m thinking for Idol lovers, this will be in the bag but somehow will wind up slotting in the Mid Control + or Strong Control – category. Not a fully square fit but that doesn’t mean it doesn’t belong in the bag.

A Power Player’s Perspective
Tyler is the higher rev tester. In contrast to Bryan and I, Tyler could literally have and Idol only bag with every Idol ball ever released. They work extremely well for him. With his rev rate, the Idol balls offer control and hit very few other balls offer him. He was immediately comfortable with the Cosmos just wheeling it between the 3rd and 4th arrow with a strong transition and roll through the pins. Now not surprising, 10 pins still do happen with this pocket magnet but for Tyler, the pocket shots carry more often than not. Once he tested the waters with the very deep shots beyond the 4th arrow did the carry percentage start to go down. His rev rate and this heavy rolling core generate a trustworthy shape that doesn’t overreact and very easy to control.

Stroker’s Stance
Bryan also tests the Cosmos. You may recall the OG Idol and Idol Helios weren’t exactly his favorites. Corner pin city typically. Strong cover on a rolly core that tended to be unable to play direct but once he opened up, he didn’t get as strong motion back with deflection through the pins frequently enough. Like me however, he also found the Idol Pearl to be a useful ball so the hope was strong the Cosmos would be similar. However, seeing out of the box tells you it’s not. As such it wasn’t the ideal shape. Going through the 2nd arrow with a very small belly seemed to yield hit or miss drive through the pins. He tried for a while to figure this ball out. He did benefit from the high hard one where the miss in sat and crushed the pins. We were surprised to find the most ideal shot was actually the slow wheel where he really gets around the ball and it actually made a significant move and carried well. That was a bit of a welcome surprise.

Final Thoughts
The Roto Grip Idol Cosmos is probably stronger than it needs to be but offers a really great look in the Idol lineup and the Roto Grip lineup in general. Honestly, it almost reminds me of an RST X-1. Same deal there. Strong control – or mid control + if you lane shine it a bit. It’s a good looking ball and for those bowling on the higher friction house shots, this could be towards the top of the bag while still allowing room for cleaner and later ball reaction in other parts. You’ll just have to decide what it takes the place of.