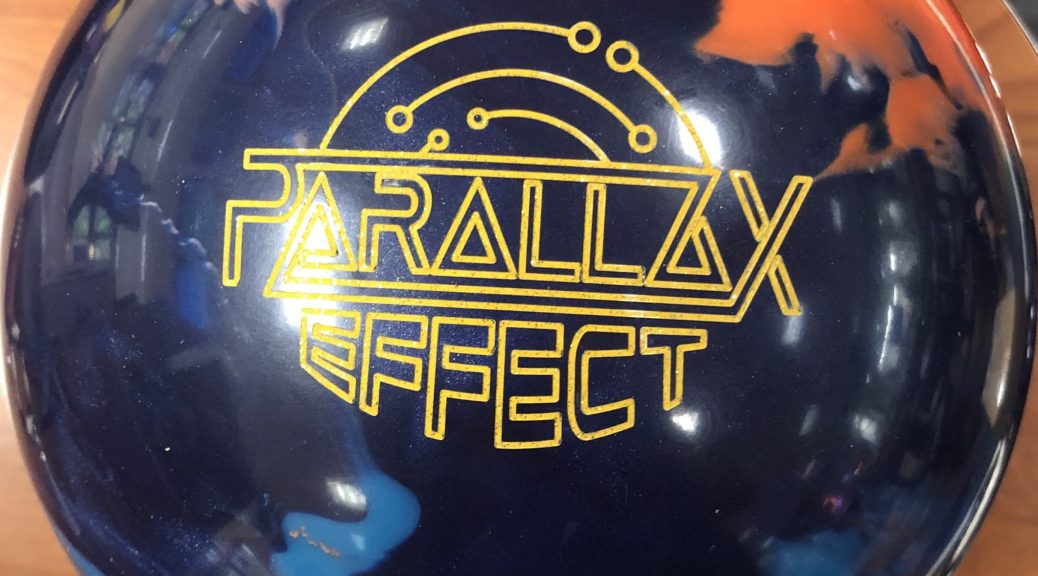 First Impressions
The Storm Parallax felt pretty easy to throw on a house shot and surprisingly easy on the USBC Teams pattern. That certainly cant be a bad thing. There is something strangely unique which I will touch on later.

Overall
This is the second installment of the Parallax and the Aeroflo core. How different is the Parallax Effect from the Parallax? Well let’s get into it. I can tell you that I was bowling our sport league on the 2019 USBC Teams pattern before testing and I wasn’t thinking a pearl asym would be the play. However, it looked good in practice so decided to stick with it to check it out. It looked good but what you see in the video is my and Sean’s house shot test. I was already confident in the ball reaction from the sport shot so felt pretty solid tossing this. The first thing is that I had to really experiment quite a bit to not strike. The shape to me isn’t quite as easily described as the typical shiny Storm Asym. This was feels more versatile. It was very responsive to what you do with your hand but in a very predictable way. I wasn’t surpised by the reaction. It wasn’t super hard to get it downlane as you would expect but certainly didn’t feel long which might sound paradoxical. It doesn’t feel flippy to me but also has a decently strong backend. Is it all that different from the Parallax? Eh. But somehow I felt like I can do more things with the Effect. Maybe it’s really a Parallax…or Paradox. You can see I can play in the oil, I can move in and toss it to the friction. You’ll see some high shots where I experiment to early friction. It really didn’t feel extremely fast responding. It kind of felt just right.

I also tested 2-handed. This is one of the easiest Storm balls I’ve thrown as a 2-hander. It was pretty easy to get downlane without having to be past the 4th arrow. It’s a very visually clear transition and the more friction you push it to the more responsive it gets. That sounds obvious but it isn’t like falling off a cliff which allows you some room for misses. A few shots, you can kind of see the shape of the walled pattern where it carries from a deeper breakpoint but it’s a little too clean to respond in that heavy oil in the middle of the lane. It actually looked a bit odd but sometimes house shots get extra walled in the middle. I scuffed the original Parallax with a light 2000 pad, maybe that would help but I kind of liked the Effect as is.

The thing I did notice is that the more balls tossed, the longer the pattern started to play, to the point that I lost a good bit of backend. I wasn’t sure what I was seeing to be honest except the reaction felt like I had been throwing urethane for a few games. I was a little confused that a pearl reactive ball would push that much oil down lane softening the ball reaction. So I went over to Storm’s site just to see if there’s anything worth identifying. I caught this little tid bit about combining ” the slower oil absorption rate of SPEC”. Hmmm, is that the reason I am seeing some carrydown like reaction? Hard to say but it was noticeable.

Sean tested as well. He saw a similar reaction. The Parallax Effect was relatively smooth but responded to friction with a late booming type shape. I like that shape a lot. This is definitely not the ball that wants to cover tons of boards for either of our styles. It looked a little to slow for that. Perhaps it’s the core doing a bit too much and not storing enough energy. Whatever it is, it looks like it can be played with some open angles but a bit less than the bigger pearl asyms like the Nuclear Cell for example. He felt like it had a very nice predictable shape that wasn’t overly sharp compared to what we might more typically see from Storm in terms of down lane responsiveness. As we approached the end of the testing, he saw similar issue with the pattern starting to get longer and longer. I found it a little strange. Enough to be worth mentioning. It’s entirely possible that something else it at play with the pattern and lane but it was odd to see that for both of us, the Parallax Effect looked great until it just didn’t.

Final Thoughts
My initial battery of testing has me liking the Storm Parallax Effect for being what seems to be a pretty versatile pearl asym. It fits in the Mid Defined category. And while normally, that category is pretty shapely down lane, the Effect was surprisingly controllable and effective on the 38ft sport shot while at the same time crushing the house shot with it’s smoother looking shape. It’s a very different shape to the Locks for example where you have to be prepared for a sharp transition. The Snap Lock is the benchmark for me in terms of favorite asym but the Storm Parallax Effect definitely gives me a different looking option there. I do want to investigate further the issue we had around the pattern impact over a couple of games worth of throws.