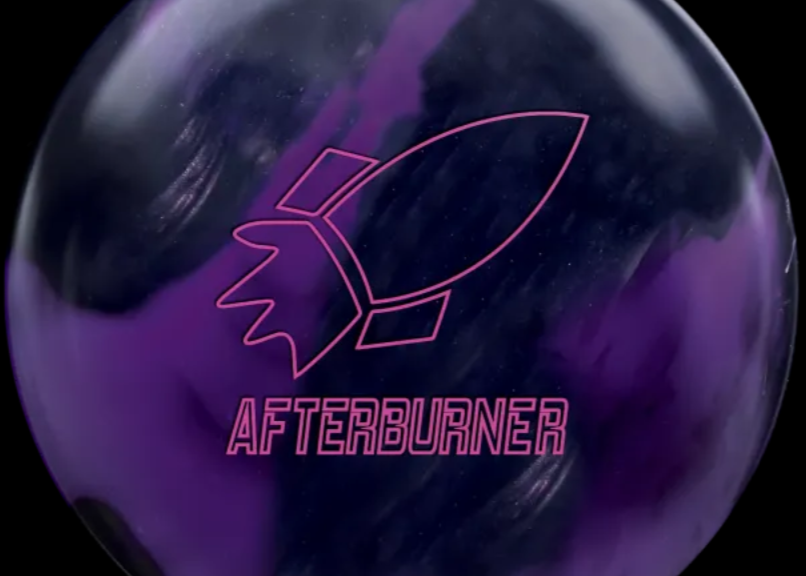 First Impressions
The Afterburner is going to be an underrated little star.

Overall
So what do we have here? This is an entry level priced ball that I’m guessing isn’t going to get much attention. However, I don’t think the Afterburner should be ignored. It’s under the radar with a medium strength hybrid coverstock and a more or less basic light bulb core with a flip puck. I feel like we’ve seen this formula before? Hmmm… Here’s the Afterburner. Here’s a little ball called the Storm Lights Out? With that said, I have to admit to being a little excited by this. I loved the Lights Out. The Storm Furious with the R2S solid over the same core was actually my personal favorite ball of all time. The Afterburner is pretty much what you would expect. With the 1500 grit polish, it’s easy to get down lane. It will go long in oil that’s for sure. But get it to the friction at the right distance downlane and it has that booming reaction you get from lightbulb cores with a little extra flip. It’s a little deceiving. My eyes don’t personally see it as long and snappy because it’s like a building boom. But ultimately, on a generic level, this does fit in the Mid Late category that is long with an angular response to friction. There’s no denying it’s response to friction when I get it out early. This house pattern is a typical high ratio pattern, with lots of oil inside of 9 and lots of friction outside of it. So this type of ball, i.e., mid late, can be prone to over under reaction. Get it to the friction early and it’s hooking hard. Push it into the oil and it floats very long. I would say not a fresh house shot ball from the left side at least not without some surface to smooth it out. I say that because I played the Solid Furious on fresh on these type of shots for years. For some breakdown, especially on the right side, this is going to be a great shape. You kind of just bounce it to the friction and its response allows you to trust it. Honestly, this is a really simple formula that I believe will work a ton. When I had a Lights Out, I intentionally short pinned that to get a ball that is a little more even with less down lane responsiveness. I drilled this one like my Furious.

I tested 2-handed as well and this is an opportunity to showcase the difference between rev dominant and speed/rev matched response. The response is clearly pretty strong from the Afterburner. Anytime you reduce the speed relative to your rev rate, you will see sharper friction response. Now where I wanted to basically push the ball to the friction at 40 ft with my 1-hand game, I actually prefer to keep the breakpoint a little further in. The increased response with my 2-hand game meant great hit from inside as opposed to the bucket type weak hit. Even though I might look fairly deep, the ball worked very well for me. Ultimately it’s because the slower response in oil allowed me to feel comfortable that I could float it to the oil down lane and not be worried about over response. If I missed out, the ball will surely recover anyway. Some stronger balls start their transition sooner, which means I don’t get the extra control in the middle of the lane. I hope that makes sense.

Final Thoughts
I really hope the Afterburner is not overlooked by bowlers. I actually think a whole house shot arsenal could be made from one ball. That’s how confident with it. Put 2000 surface and it would be more than enough for fresh. Put maybe 3000 on a short pin ball for control reaction. Then out of box when you just need to get in and play the friction. I feel like 900 Global snuck this one in right under our noses and I’m hoping this video will help people wake up and smell the coffee.